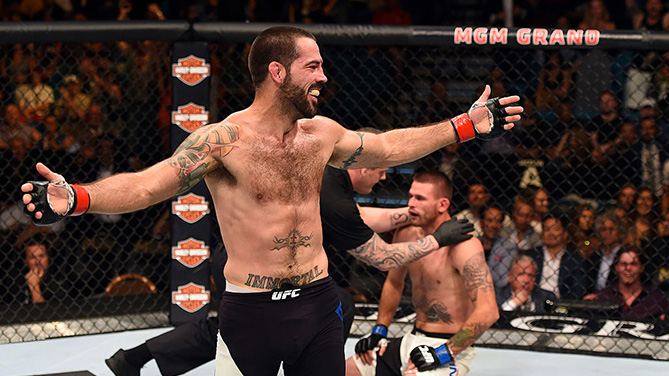 Matt Brown isn’t the same man he was when he made his UFC debut in June 2008. He’s better.

Forget the losses in four of his last five fights as he heads into his UFC 206 co-main event against Donald Cerrone on Saturday night. He’s been there and done that and went on to put together a seven-fight win streak in response.

This is deeper than that for someone who says, “Coming into the UFC, I was a very nervous and scared young kid that was just chasing a dream.”

Today, there are still professional dreams, but they ride side by side with the realities of life. Brown is a husband and father now, and not just a prizefighter. But prizefighting is what pays the bills for his family, so it’s still a high priority for the Ohio native, even if he does ponder why he still does it.

“It (why he fights) is something that I answer for myself on a regular basis,” Brown said. “It’s a very, very deep answer and it’s hard to express. But it (answering that question) is necessary to be at your best and to be able to accept the wins and the losses equally and be content with yourself when you walk away, no matter what happens.

Sometimes I do wonder why I still do it, and other times I realize just how much I love doing it.

To sum it up in one sentence, I would say simply for the love of it.”

To find that love in the midst of a 1-4 stretch isn’t easy, and it gets harder when the MMA world questions whether he should be fighting or thinking about retirement. It’s an insult to a 35-year-old who got caught by the best submission artist in the welterweight division (Demian Maia) and one of the hardest punchers at 170 pounds (Jake Ellenberger), and also lost decisions to two of the top dogs in the class in Robbie Lawler and Johny Hendricks. But Brown doesn’t see it that way.

“I don’t get insulted by the fact that it (retirement) is brought up,” he said. “It wouldn’t have even been a thought five years ago, but even the questions of ‘Have you thought about it?’ obviously implies that I’m closer than I was. Not saying that I’m toward the end or anything, but I know where I’m at. I can be a critical enough person, especially after the Ellenberger fight, to say, yeah, I lost four out of five, a lot of people would say hang ‘em up. It’s not a stupid thing or a ridiculous thing. If I was looking at from the outside, I may say the same thing.”

But as the one on the inside, the one putting on the gloves, biting down on the mouthpiece and actually stepping into the Octagon, Brown makes it clear that the way he feels now, he’s far from done.

“I feel like I haven’t reached my peak and I know what I’m capable of and what I’m able to do,” he said. “I’ll probably retire the day I feel like that I’m not capable anymore. I didn’t come to the UFC to be number two. And the fact that I know that I’m capable of it at this point, is part of what continues to drive me. Being able to realistically look at yourself objectively and see when you’re not actually capable anymore is the hard part.”

Knowing that such a possibility is there shows just how far Brown has come since his days as an almost surly character prone to short answers while not letting too many people get through his guard. Today, he knows the importance of telling his story, to show where he’s been, where he’s at, and where he’s going. And it’s not just for himself. 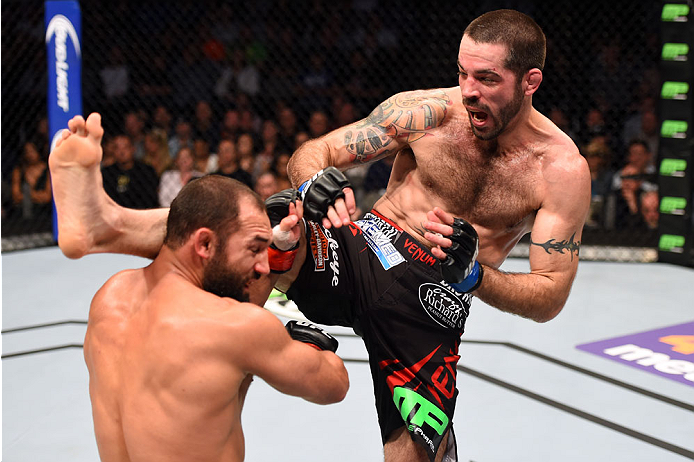 “I think I’ve progressed and evolved as a person and I think this sport has made me a better person,” he said. “It’s made me stronger, more confident and more intelligent and self-aware. I could go on all day. And I’ve realized that opening up isn’t a weakness either. It’s okay to say what you feel, and I’ve had so many messages about people I’ve inspired and there’s nothing more powerful. It’s great to have things for yourself, but when I hear someone say that they were on the verge of destruction and they watched my fights and I brought them back, there’s nothing better.

“I want people to know that you can come from a shitty, small town like I did, and have no hope and be a drug addict and still grow up and do something positive with your life and still be a well-spoken and intelligent person and represent the sport,” Brown continues. “I don’t have to be some Neanderthal; I can be a spokesman for the sport and people can look at me and say, ‘Man, he’s a great example for my kids getting into martial arts.’ This is a serious and deep, meaningful thing for me.”

It’s also a time capsule for his daughter and two sons, a way for them to one day look back and see where their father was at when he was punching people for a living. That’s a gift not many children have, and Brown is appreciative of it. But he’s also not the sentimental type when it comes to his day job, and he’s shown it during fight week in Toronto. Cerrone may be trying to keep it light, but Brown has nothing but bad intentions to deliver. On Saturday, it’s Brown or Cerrone, and “The Immortal” knows how important a win is.

“I realize that this isn’t gonna last forever and I’m doing everything I can to maximize myself and I still believe I have what it takes to be a champion,” he said. “I have the heart, the fists, the soul and the mind, and all I’ve got to do is put it all together when I step in there. I know I can beat any man on this planet at my weight, but things don’t always work out like that. Sometimes, even blind squirrels find nuts. (Laughs) So I can look at the reality of it and understand what it is.”

Does that reality indicate that the “mean” Matt Brown is still there?

“He’s definitely still there,” he said.