"I want to get to the point where it doesn’t matter what they’re about
anymore. I don’t care about them anymore; it’s about me now." - Matt Brown 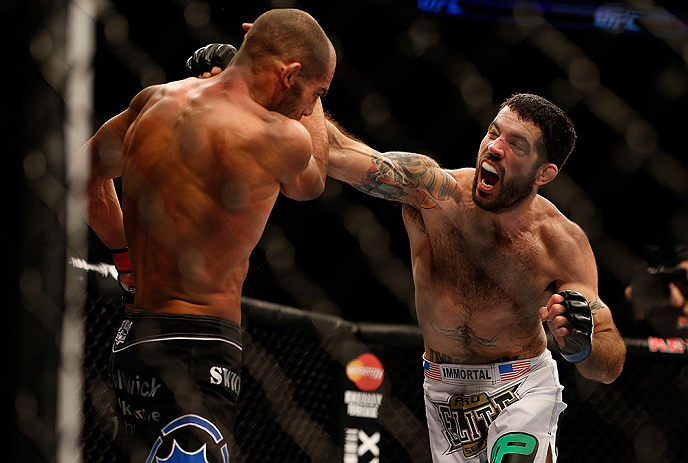 Former lightweight boxing champ Ray “Boom Boom” Mancini once told me that when he had gone through a fight with someone, he knew his opponent better than anyone – his family, his friends, even his mother. UFC welterweight Matt Brown, one of those fighters who can test a foe’s heart with his relentless pressure and refusal to go away quietly, would agree.

“You find out about the qualities that are hidden the deepest inside their subconscious,” he said. “It doesn’t necessarily give you a perspective on their whole life, but it definitely tells you where they’re at in that point in their lives. Sometimes you find that guys are extremely resilient and strong, and some guys are just the opposite.”

If that’s the kind of truth you’re not willing to reveal, then you’re probably in the wrong business and Brown is not the guy you want to be locked in the Octagon with. And though “The Immortal” has accepted the reputation he’s earned as the one fighter who will test you to a greater extent than most, even if you manage to beat him, he’s reached a time in his career where he’s not satisfied with just being a tough out.

“That’s something I’ve always thought about, and I want to find out, but I’m getting to the point now where it’s not enough,” he said. “I need to get past just finding out and I want to get to the point where it doesn’t matter what they’re about anymore. I don’t care about them anymore; it’s about me now.”

In many ways, it’s perfect timing. Once on the verge of being cut from the UFC roster after three consecutive losses in 2010, Brown is now one of the hottest fighters in the 170-pound division, having won four straight, including a December knockout of Mike Swick that was aired on FOX. On Saturday, he returns to network television for a showdown with Jordan Mein, a fight that replaced an injury-scrapped matchup with Dan Hardy. Not surprisingly, the 32-year-old Ohio native wasn’t too bothered by the switch.

“They’re actually pretty similar opponents in that they’re both more boxers than anything else,” he said. “But I think the biggest difference is that Jordan Mein switches southpaw a lot, so I had to bring in some southpaw training partners. That was probably the biggest change.”

Maybe not though. Perhaps the biggest change is that Brown is no longer looking over his shoulder wondering if a bad fight will earn him his walking papers. Today, it’s all about progress in fighting and in life.

“At this point, I don’t even think about that no more,” said Brown of the dicey moments in 2010. “It was a negative, external pressure you put on yourself, but it’s not a huge thing anymore. It’s not about keeping a job or anything like that; it’s simply about going out there and fighting the best I can. I feel like I haven’t performed to my own potential. I’m my own harshest critic, so that really irks me all the time. So that’s something that I’ve really been focusing on, just performing to my potential, and when you do that, you don’t have any regrets. Win or lose, it sucks when you don’t perform to your potential.”

After a rough start to his MMA career, Brown brought a 9-6 record into the seventh season of The Ultimate Fighter, won two fights before getting submitted by eventual winner Amir Sadollah, and then began an unlikely voyage in the UFC that has lasted nearly five years.

“I don’t know if I actually consciously thought about it, but I dreamed about it,” he said. “I didn’t go on The Ultimate Fighter to be on TV. I wanted to be in the UFC and I wanted to be fighting everybody. This is where I wanted to be, but whether it was a realistic expectation or not, it might have felt a little unrealistic at the time.”

There were peaks and valleys, as he went 5-5 in his first ten Octagon bouts. But then came the winning streak and a new lease on a career that sees him knocking on the door of the top ten in the world. He doesn’t address such matters though.

“I don’t think anything except April 20. Beyond that, everything will take care of itself.”

That’s got to be tough to do. Despite his reputation in the cage, he is human.

“I realized how fast everything can go down, and I learned my lessons from the losses and the wins too,” he said. “It takes some mental fortitude and discipline to not look past April 20, but that’s just something I focus on and think about. It’s not natural though, and it’s not easy. In the back of my head there’s absolutely that thought that I want to fight the top guys and fight contenders for the championship, but it takes mental discipline. This is a mental sport so it’s something that I work on and focus on.”

Now that’s as real as it gets.