Matt Brown: The Quiet Storm of The Immortal

"I keep my mind clear and allow things to
happen. That’s really what I believe the key to being a good,
successful fighter is, just allowing yourself to do as good as you can." - Matt Brown 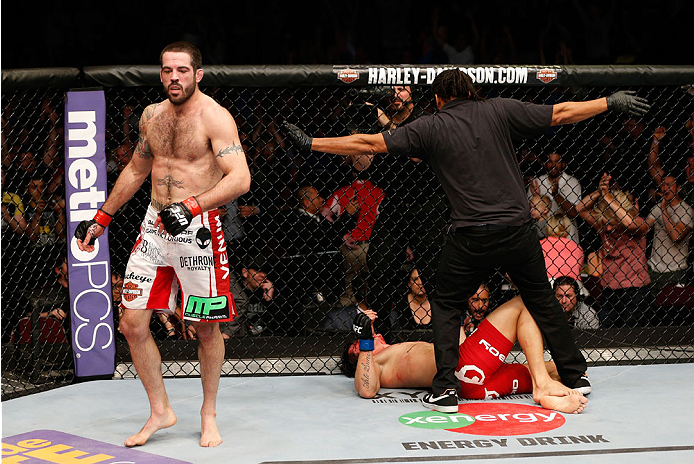 Matt Brown’s intensity is a tangible, living, breathing thing. Yet, his presentation is as calm as the Ohio skies in June.

That’s a testament to the personal growth he’s experienced after nearly a decade spent testing his own personal will, and breaking those of others in the fire of hand-to-hand combat.  Brown doesn’t step into the Octagon to shake hands and “bro hug;” he’s there to shred and destroy, and it’s a job he does far better than most.

That said, the 33-year-old Columbus native wasn’t always the “Apex predator” of the welterweight fold. In fact, the hard-scrabble father of two spent several years on the opposite end of the conflict equation. It certainly wasn’t for a lack of trying, as Brown’s natural determination and grit has always been remarkable, but the complex formula required to find success on the sport’s most prominent proving ground can be a taxing thing to fuse together on fight night.

Following his stint on the seventh season of The Ultimate Fighter, “The Immortal” stepped into the ranks of the UFC roster and battled to carve out his place. When success came it often did so in brutal fashion, as his punishing reputation was built upon highlight finishes at the expense of veterans such as Pete Sell and James Wilks. Suddenly, where Brown had stumbled a bit out of the proverbial gates, the hard-charging welterweight racked up an impressive three-fight winning streak.

He was finally starting to build some momentum in the shark tank of the 170-pound collective, but tides turn quickly in mixed martial arts, and 2010 proved to be a dark year for the Midwestern grinder.

Where Brown had previously found success in three straight showings, he found himself on the losing end of this his next three bouts - all of which came against opposition that would have ushered him to the next level. Not only was Brown defeated, but submitted in each of the three tilts, and after a “give one, take one” over his next two fights, it began to look like his time inside the Octagon was coming to a close.

Nevertheless, like the ever-popular Honey Badger of Internet fame, Brown came raging back with a vengeance.

What began at the expense of Chris Cope at UFC 143 in February of 2012 has carried the former laborer turned mixed martial artist to the top of the most competitive division under the UFC banner. In a two-and-a half year stretch, Brown has notched an insane seven-fight winning streak, with all but one coming by way of knockout.

Every time out he’s looked more ferocious, hunting down the opposition relentlessly and garnering respect and acclaim along the way as he’s forged himself into a legitimate title contender. While he attacks like a log-chipper from the opening bell - and his aggression has become the thing of MMA folklore - the man himself has been the portrait of quiet intensity.

“I don’t really know what it is,” Brown said about the contrast of chaos and stillness. “I just go out there and fight. I keep my mind clear and allow things to happen. That’s really what I believe the key to being a good, successful fighter is, just allowing yourself to do as good as you can. I think a lot of times we have a problem with holding ourselves back for whatever reason. It can be many different reasons why we do it, from mental blocks and physical problems to fear and nerves. It can be a bunch of different things, but I think the biggest key to success is allowing it to happen and letting it go. Then you are stepping on the pedal and letting the wheels turn. You’re not putting your foot on the brake. You are keeping your eyes on the windshield and not the rearview mirror.”

The surging contender will square off with former title challenger Robbie Lawler in the main event at UFC on FOX 12 this Saturday in San Jose, a bout that will determine who will be the next man to face champion Johny Hendricks for the welterweight strap. The upcoming fight is the culmination of years of hard work, dedication, sacrifice and settling the opposition in abrupt fashion. Yet Brown is the walking epitome of the calm before the storm that will overtake San Jose on July 26.

“We are going to find out Saturday night,” Brown said. “It’s funny you ask about my mindset because I was just looking at certain things. My life could take such a huge turn this weekend. I could go way up or I could go back down the ladder. I was looking at realtor sites and looking at houses and areas I want to live in, and I realized I couldn’t even do that yet because my life could change very dramatically this weekend. It’s kind of funny how things in life work out. It’s funny how days will come along that can completely change your life.

“I have a clear mind. My mind is not cluttered and I’m content with whatever happens. I know on Sunday, July 27 I’m going to wake up a happy person no matter what happens on July 26. I’m going to see my wife and kids. Eat a pizza and it’s going to be the same day for me. Obviously, there could be a gigantic difference, win or lose. But either way, I’m going to be living a happy life. I’m not going to be any more or less of a person. I’m just more content and clear-minded in that sense.”

While the bout between Brown and Lawler will come with heavy implications on the welterweight title picture and is one of the year’s most anticipated scraps, the Ultimate Fighter alum turned knockout machine has kept his focus on center point. Much like the reputation he’s forged for unleashing violence inside the cage, “Ruthless” has also built a storied career upon the crumbled bodies of his opposition.

Where this is a fight that will determine the next title contender at 170 pounds, fight fans are also anxiously awaiting the opening bell in Brown vs. Lawler. When that moment comes, and the referee steps aside, Brown will be looking to apply his unique brand of pressure to the American Top Team product, and set about pushing him toward the place where all men eventually fold.