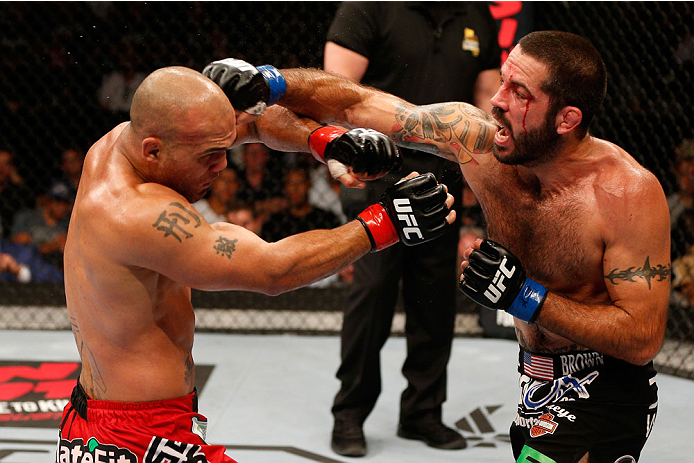 And, statistically, “The Immortal” is right.

The Ultimate Fighter 7 alum has more KOs inside the Octagon than any other welterweight in history, he has the second most finishes in general at 170 pounds behind UFC Hall of Famer Matt Hughes, and he has the second highest significant striking accuracy in the division’s history.

If that wasn’t enough, during Brown’s seven-fight win streak - tied for third longest at welterweight - Brown recorded five consecutive striking stoppages, a feat only matched by Thiago Alves and UFC Hall of Famer Chuck Liddell in company history. What more does he have to do to prove he’s the last welterweight in the world you want to stay standing against?

The 34-year-old Ohio native is currently the fifth-ranked UFC welterweight following his path of destruction win streak that eventually came to an end last July as Brown lost a decision to current UFC welterweight champion Robbie Lawler. Despite what the scorecards read, Brown actually outstruck “Ruthless” in three of the five rounds. Loss or no loss, it was another classic performance only Brown could achieve as he marched down his opponent while attacking with punches, kicks, knees and elbows, whether at range or in the clinch.

“I welcome that battle,” he said. “I’m not going to back down. I love that. If he wants to stand up and trade shots with me, I’ll gladly oblige that. If he wants to fight in the clinch with me all day, I’ll gladly oblige that too. I don’t have any qualms with where I’m at in striking. I don’t think anybody can stand with me for too long. When I’m at my best, I think I’m the best striker in the UFC - easily.”

With his 12-6 UFC record including 10 finishes, Brown’s stock in the weight class didn’t drop an inch from the loss as The Immortal exits one title eliminator to a collision with the division’s former champ, Johny Hendricks, at UFC 185 this Saturday. Much was written about Brown’s welterweight ascension after losing three straight inside the Octagon in 2010, but that was a lifetime ago. Today’s Brown isn’t struggling to find a place for himself on the roster; today’s Brown is arguably one impressive win away from challenging for UFC gold.

“I always say you have to see it to be it, and I have to see myself as that person to be that person at the top,” Brown said. “Before, it was always a dream to be at the top of the UFC and to be a champion or even in the top 10. It was hard to envision. That is something that has changed over time in my mentality, because now I see it. I believe it. I see myself as the champion, I see myself as a legendary champion. Whether that’s an Anderson Silva or Georges St-Pierre or Fedor Emelianenko. That’s what I see myself becoming in the future. The only way for that to happen is for me to see it first.”

Up next, Brown battles “Bigg Rigg” Hendricks. Coming off a decision loss of his own to Lawler in December, Hendricks is a force to be reckoned with as he climbed to the top of the division with one-punch knockouts and Fight of the Night bonuses. The former two-time NCAA Division I National Champion wrestler has never been finished in his pro MMA career and his two most recent losses have been highly controversial split decisions to Lawler and Georges St-Pierre with the UFC title on the line.

While this momentous scrap is third billed on the UFC 185 card behind a pair of title fights, it’s very questionable if either of those fights could top this tangle in anticipation.

“Me and Johny are the main event for this fight,” Brown said. “The fights after us are just fillers. It’s all about me and Johny. We might not be the last fight on the card, but we’re the main event. It’s pretty obvious what he does. He’s powerful, strong, explosive and he can just about out wrestle anybody. That’s what he does. That’s what I got to deal with. We’re going to find out who can deal with who. It seems that if you look at my record that it would be in his best interest to look for the takedown.”

This Saturday at the American Airlines Center in Dallas, welterweights will war as The Immortal aims to prove he’s title-worthy by taking out Hendricks. “I really enjoy the pressure of being in the spotlight and I think I perform better when the pressure is on,” Brown said. “First, I have to worry about beating him, but I don’t see why I wouldn’t be the next in line if I do all that. First things first. Take care of Johny and then go from there.”