Matt Brown: 'A Dog Fight is My Kind of Fight'

"If it becomes a dog fight, it is my type of fight.” - Matt Brown 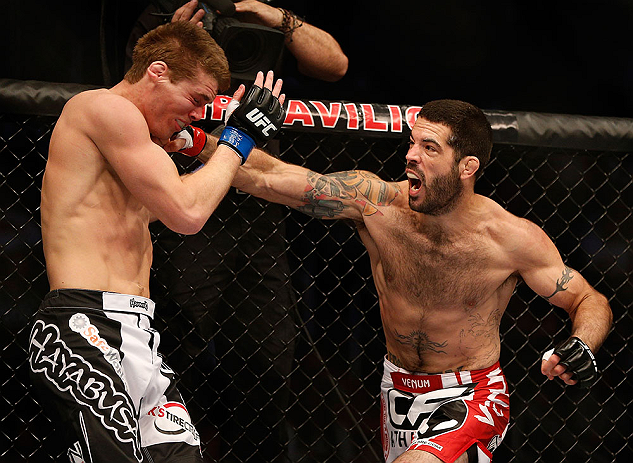 Back in 2010, Matt Brown found himself on a three fight losing skid and with his back against a wall. The Ultimate Fighter season 7 veteran had a reputation for toughness and a penchant for exciting fights, but knew that he was uncomfortably close to losing his job in the world’s best fighting organization.

In fact, Brown was certain that he’d get cut from the UFC. Turns out, “The Immortal” fights well when all hope is lost.

“I was definitely worried,” Brown tells UFC.com of having his head on the chopping block.

“I’d lost three in a row. Anytime anybody loses that many in a row, you have to assume you are going to get cut. And I did. I actually just began assuming that, no matter what, I was going to get cut. It actually kind of took the pressure off of me. I assumed I was already cut so, ‘hell, I don’t have anything to lose.’”

Brown went on to gain a great deal, reeling off five consecutive wins and positioning himself on the cusp of title contention. On August 17th, Brown tries to make it six in a row against the also red-hot Mike Pyle at UFC Fight Night in Boston.

The bout will be Brown’s second of 2013, a healthy pace at the top level of MMA, to be sure. In 2012, however, Brown fought and won an incredible four times.

The Ohio-based fighter says he prefers to stay active, and is happy that things worked out that way last year. “I’d rather be more active, but at the same time it is good to get a break for your body.”

“Break” is a relative term for Brown’s body, however. The 32-year-old admits to using some down time for gardening, family activities and even to develop his new line of exercise equipment - Immortal Combat Equipment – but not a day goes by, even during “vacations” where Brown isn’t in the gym sharpening his sword for future battles. It is a trait he shares with the welterweight division’s champion, Georges St-Pierre.

When St-Pierre finally did get around to taking vacations once his UFC career began to take off, he insisted on always staying active during them. Visiting exotic Brazil, for example, only to spend a couple hours in a gi and on the mat, working on his Brazilian Jiu-Jitsu.

According to Brown, “hard work, staying consistent and being in the gym every day” is the only key to success he knows. It may be for this reason that he can envision himself successfully challenging a guy like St-Pierre.

St-Pierre first defends against Johny Hendricks at UFC 167 in November, of course. If Brown can beat Pyle for his sixth straight win, he’ll undoubtedly deserve to be on a short list of potential title challengers for whoever comes out on top in the St-Pierre vs. Hendricks bout.

What’s interesting about Brown’s title talk is not that he says he deserves a shot, but that he actually thinks St-Pierre is a “good matchup” for him.

“You never know what’s going to happen but I do think that [St-Pierre] is one of the best fights out there for me, matchup wise.”

The feared brawler elaborates. “I think a lot of people see what [GSP] does, he has barely lost a round, and they don’t think anybody can do anything to him. But they underestimate what I can do.

“I think my style is a bad matchup for him. I’m a pressure fighter and I think I can stifle his takedowns and make him fight the whole time. I have a, I don’t know if you’d call it a ‘talent,’ but I’m good at making people fight. I’m getting a lot better at wrestling and the grappling parts. I believe if I can do that and turn it into a dog fight, then it’s a win for me.”

Brown divulges all this only at this writer’s repeated prompting, however, and he remains singularly focused on the man he’ll face at UFC Fight Night, Mike Pyle. “[Pyle] is extremely good. I’ve trained with him before. He’s crafty, slick, smart and does everything well. There are no really big holes in his game,” Brown says, echoing comments Pyle has made of him in the media.

Brown doesn’t think having trained with Pyle in the past will be a negative or positive. “When we trained together that potential of fighting one another was always there. It was a long time ago. We are both different fighters now. I don’t think it will make a huge difference in the fight,” he says.

And whether it is Pyle in the immediate future or a Georges St-Pierre in the future, Brown is confident that not just his junkyard dog style of fighting, but the thoughtful strategies that his team of coaches puts together for him will help bring him victory. “My coaches get the strategy together for me,” he says.

“We do have a strategy. It is a far deeper strategy than me just making it a dog fight. That’s the case for GSP or for Mike Pyle. But I also know that if it becomes a dog fight, it is my type of fight.”