Matt Brown Is Always Looking To Do More

While Matt Brown Has Likely Seen It All In His 29 Fights In The UFC, The Storied Veteran Is Always Looking To Learn More, See More, Do More
By Thomas Gerbasi, on Twitter @TGerbasi • Mar. 22, 2022

Having the record for most knockouts in UFC welterweight history is an impressive feat, but perhaps Matt Brown’s most notable streak is that no one has ever gotten into a pre-fight trash talking war of words with “The Immortal”.

Or has someone dared to cross the Ohio native?

Don't Miss Any Of UFC Columbus On ESPN/ESPN+

“You know, to be honest, probably the most trash talking I ever dealt with in my career was when I fought Stephen Thompson,” said Brown.

Okay, interview over. How can anyone get into a war of words with the nicest person in mixed martial arts?

“It wasn't necessarily from Stephen himself,” he said. “But his fanboys, they were just rabid. It was constant. They were sending me messages all the time and I wasn't saying things in interviews; I was just being confident, like, 'Yes, I'm gonna beat him,' and things like that, and they would just take it so personal. It was kind of annoying. But it really motivated me and drove me to train even harder.”

Brown beat Thompson that night in April of 2012, spoiling the perfect record of “Wonderboy”. A decade later, both are still competing against the best in the game in the shark tank known as the UFC’s welterweight division. And yeah, no one has been brave enough to start some war of words with Brown.

“I don't know, I don't think there's too many scared fighters out there,” he laughs. “It's certainly a motivator, but it also doesn't matter. It's not something I'm really interested in. It's not really up my alley and I'm not a good trash talker, either.” 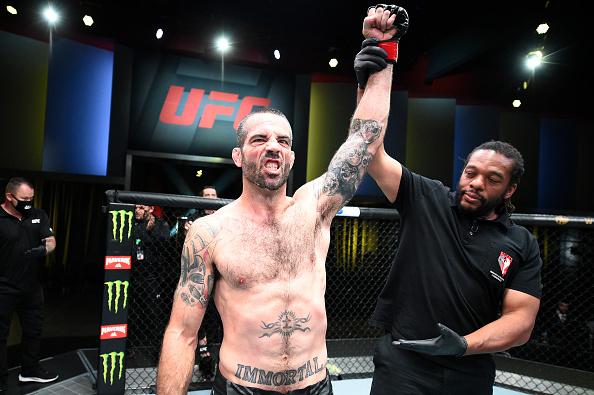 Matt Brown reacts after his knockout victory over Dhiego Lima of Brazil in a welterweight bout during the UFC Fight Night event at UFC APEX on June 19, 2021 in Las Vegas, Nevada. (Photo by Chris Unger/Zuffa LLC)

Why bother with trash talk when one stone-faced glare from the veteran can be intimidating enough? And it’s been that way for most of his 41 years.

“Growing up, I remember getting bullied and kids pushing me around and stuff, and I never really said anything, but I would just punch them,” Brown said. “That was my way of dealing with them. If I'm to the point where I'm gonna say something like that about you, I'm just gonna punch you - we're just gonna fight about it.”

Well, there’s that, but maybe the reason why his opponents keep it strictly business is because Brown has earned his respect in the game the hard way – he’s battled through the good, the bad and the ugly and he’s still standing 28 UFC fights later. On Saturday, he makes the walk to the Octagon for the 29th time to face Bryan Barberena, and these days, when opponents talk about Brown, the word “legend” is often attached to it.

“I don't feel like I'm a legend,” said Brown, and that’s not a surprising comment coming from the self-effacing vet. “I feel like I still got a lot of big things to do and I'm still growing and developing and progressing all the time. So I don't look at it that way, but it's certainly flattering that people say those kind of things about me. It makes me feel good about what I've done in the past, and it keeps me confident that I can still do more.”

His performances since snapping a three-fight losing streak in 2017 prove that he’s still got it. Owner of a 3-2 slate in his last five, with the only losses coming against Miguel Baeza and Carlos Condit, Brown has scored highlight reel finishes of Diego Sanchez, Ben Saunders and Dhiego Lima, putting him one KO away from tying Derrick Lewis for most knockouts in UFC history.

“Age, it don't mean s**t to me,” Brown said. “It's easy to let that get into your head, but I tell you what, I think I feel better now than I ever have. I'm pretty stoked for my 40s. I think I'm gonna do some good things.

“Well, we'll see what happens,” laughs Brown, who takes both a philosophical and practical approach to competing at a high level at an age when most of his peers have already walked away.

“I've always felt that age is just a number, especially in this sport,” he said. “There's so many ways to win and so many variables that go into it, so I don't think it plays nearly as big of a factor, and I just gotta look at the positive of it. Now I have more experience over everyone.

“And I think a lot is having training knowledge and training smarter and not just going in every single day and going all out,” Brown continues. “I don't know how I made it through the first five, ten years of my career, because I just trained all out every single day. That's what training was to me - it wasn't really training, it was fighting.

"I was just fighting every day, so I don't know how I got through those. (Laughs) Nowadays, I'm actually training, getting better, and learning how to work with training partners and learning how to get the most out of myself in every session, things like that. And of course, I think the nutrition, the strength training, all the supplementary stuff, goes a very long way. And I've always been very well educated on all of those, so I think that's made a huge difference.” 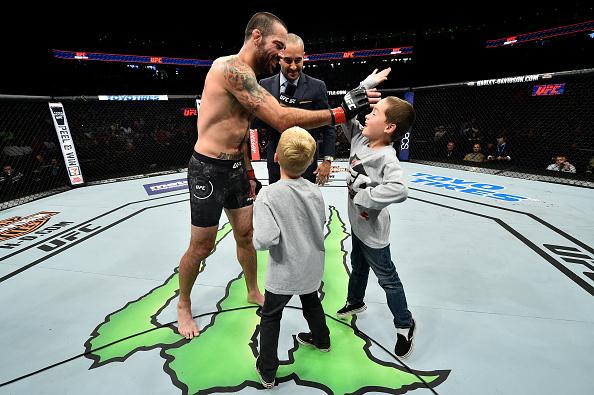 Matt Brown celebrates with his children after defeating Diego Sanchez in their welterweight bout during the UFC Fight Night event inside the Ted Constant Convention Center on November 11, 2017 in Norfolk, Virginia. Matt Brown won by KO. (Photo by Brandon Magnus/Zuffa LLC)

And once preparation is settled, all that’s left is the fight, but as Brown knows, the best training camp in the world can go for naught in a split second before or during the match.

“If you think about it, you've got 15 minutes to get it done,” he said. “There's been a lot of fights where I won and maybe if that fight happened ten minutes earlier, he probably would have won. It's just a picture in time of where you're at in that exact moment. And that's what this sport is - you've got those 15 minutes and you gotta get it done right then.

"That's why I'm so impressed with guys like (Kamaru) Usman and Jon Jones - these guys that go on these undefeated streaks - because we all have bad days in there, wake up on the wrong side of the bed, have a tough weight cut. I've had things happen in the locker room five minutes before I walked out, and to be able to put all those things behind you and go out there and perform, that truly makes a special fighter.”

He may not admit it, but Brown is a special fighter. No one has nearly 14 years in the UFC without being one, and more often than not, he has performed when the lights are brightest. Some can’t, at least not consistently, and that’s what makes MMA so compelling.

“It's the beauty and the curse of this sport,” said Brown. “That's certainly what makes the stakes so high, and when those guys are getting announced by Bruce Buffer, that's what makes it so intense. This is your time, and this is your only time, buddy. That's what makes it so great. I just hope that people can recognize that and show the respect. I just hate when someone loses and they're like, ‘He sucks,’ and things like that. They just gotta look past that and see it for what it is.”

Reading the comments is a downside that has become a greater part of being a professional athlete in this day and age, and Brown believes it’s more prevalent in MMA than in other sports. 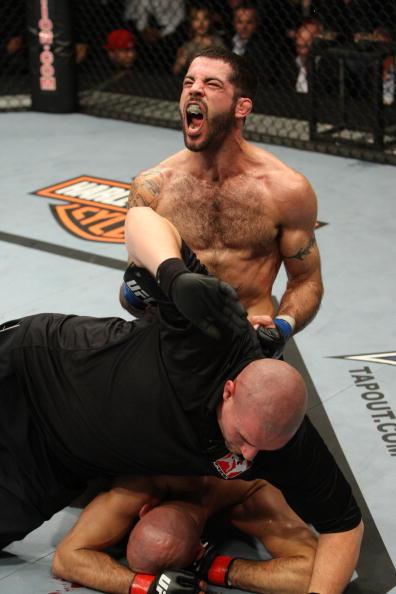 That’s not likely to change, and while that’s disappointing, Brown still finds his joy in the little things taking place far from the bright lights of fight night.

“I enjoy it more than I ever have,” he said. “Well, I don't know if enjoyment is the right way to say that. (Laughs) It's so stressful, it's so scary, you're so anxious and all these things, but when I say I enjoy it, I'm talking about the day-to-day grind, the camaraderie with your brothers and just laying there in a pool of sweat after a day of training and being picked up by your brother.”

The father of three and owner of the Immortal Martial Arts Center tells of a routine in his gym where after an hour’s worth of rolling on the mats, a local pastor comes in and gives a sermon. It’s not necessarily a religious service, but a talk about life. Brown muses about this time with his teammates and admits that when it comes to the “R” word, it has nothing to do with missing the actual fight.

“We're all scared of retirement, and I think that's what we're really scared of, losing that.”

Not yet, Matt Brown. Not yet.