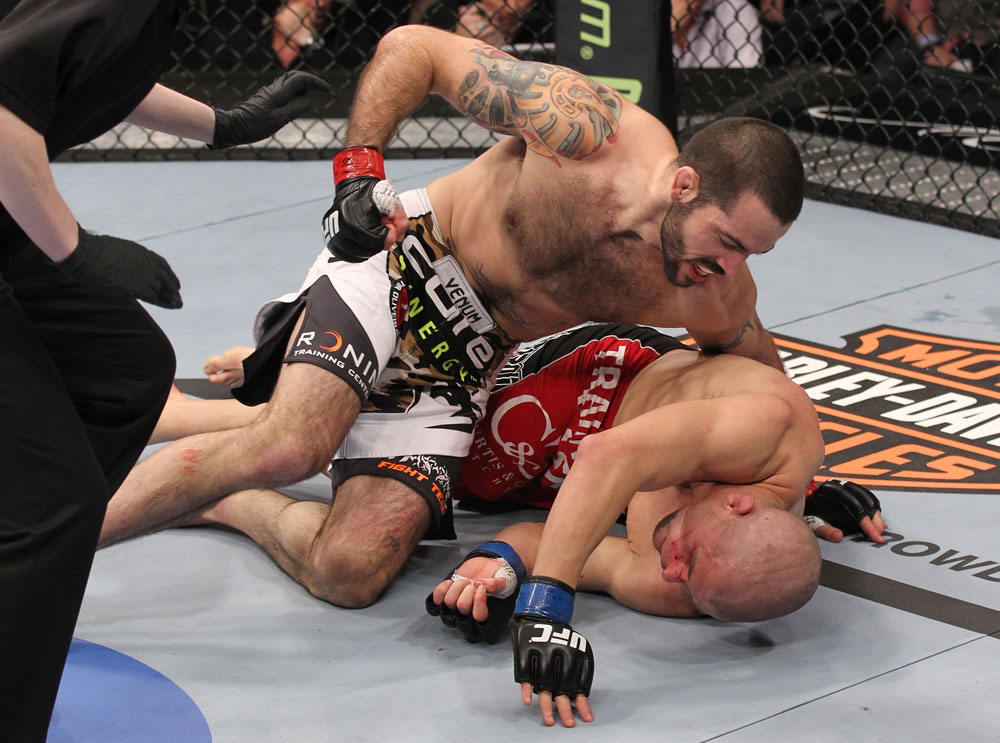 Life is a mystery, but sports are not. Whether it’s a team or a single person, the side that finishes first or with the most points is usually the winner.

In the UFC, both of those outcomes are true. The first fighter to finish the other by KO/TKO or submission wins, or if it goes to the judges’ score cards the one with the higher round totals wins. Between all the training camps, gameplans, different martial art styles, diets, nutritionists, strength & conditioning regimens, studying video tape, contract negotiations, sponsorships, press conferences, questionable judging, and, now, Twitter, sometimes the original idea to win in combat sports gets lost in the shuffle: hit your opponent more times and harder than they hit you.

For welterweight Matt “The Immortal” Brown, this abridged attacking attitude is what fueled his latest UFC victory and will continue to push him literally forward against his next opponent, Stephen “Wonderboy” Thompson, at UFC 145.

“A fight is not that complicated of a thing,” states Brown. “I think there are times when I've overcomplicated it. I think I've learned from my mistakes. Now, it is simple. I have to find a way to punch you, kick you, and knee you. That's what it comes down to. It's not a whole lot more to it.”

The 31-year old father of twin boys with a professional record of 15-11 believes he has come to an understanding with his in-cage identity. After four years in the UFC, including 11 Octagon appearances and time as a cast member of The Ultimate Fighter season 7, Brown has broken down his game into two easy categories: what works and what doesn’t. To be able to reach this point of clarity, he has had his ups and downs in the crucible of competition, and Brown has learned from them all to be the better fighter that he is today.

“I just kind of simplified everything and went back to the basics of who I am as a fighter,” tells Brown. “I learn so much all the time in the gym training and I'm always trying to add tons of new things for every fight. For this fight, I felt it necessary to be who I am and not really try to add anything new and special. Going forward, I’m going to do what I'm good at and not try to be something I'm not. I think I have made that mistake in some fights. There's a point where you need to learn new things to evolve, but you have to be very good at the new thing you learn before you use it in competition. I think I was trying some things that I hadn't necessarily proved I was good at; I hadn't practiced it enough or implemented it in the gym enough. I was trying it in the middle of the fight and that can be a problem.”

It’s not about just taking the center of the Octagon, Brown’s “bread and butter” is getting right into his opponent’s face and hitting them with all eight points of contact until the ref stops it. “My style is I'm aggressive,” says Brown, who is a versatile fighter and fight finisher with all of his wins except one coming by submission or KO/TKO. “That's my style to push a high pace and grind out the fight and make it a dirty fight. I have the technical abilities to have a technical fight, but I think it's best to stick with what you are. I perform at my best when I'm pushing the action and I'm creating a tough, dirty fight.”

Fight fans witnessed the latest exciting stoppage by Brown at UFC 143 with a TKO over TUF 13 alum Chris Cope. “He was a good standup fighter, so that played into my game,” remembers Brown, who quickly dispatched Cope in the second round with a right hook that dazed his foe and a left hook that ended it. “I knew he would try to be in and out a lot and try to stand with me. I knew it was a matter of the opening coming at the right time. I was kind of trying to set him up with some different things in the first and one of the setups opened up in the second.”

Next up for is undefeated kickboxing ace Thompson, who bested Brown for “Knockout of the Night” honors at the February event. At UFC 145 in Atlanta, Georgia, the plan is for a welterweight showdown inside the Octagon between Thompson’s Kempo Karate and Brown’s Muay Thai. A native of Simpsonville, South Carolina, Thompson has maintained an unfettered winning streak through amateur and professional kickboxing as well as MMA, with the majority of his wins coming by knockout. Thompson made his organizational debut at UFC 143 with the first round head kick finish of fellow debutant Dan Stittgen.

“He brings a lot of techniques that are not seen every day and he does them very well,” admits Brown. “It's like I've said from the beginning, I don't think he's faced the best guys in his kickboxing career or in MMA. He hasn't faced nobody really tough. I think his kickboxing is overrated - all the hype - and he's overrated altogether. This I think will be the first time he's facing a true fighter and a true professional. I'm coming in and looking to put it on him and looking to break him and see if he can handle a real fight.”

To put it mildly, Brown believes there are mitigating factors that favored “Wonderboy,” like Thompson’s wealth of experience coupled with Stittgen taking the fight on short notice. “Even if he had a full training camp, your first UFC is scary s**t and Thompson is not the kind of guy you prepare for in a week or two,” explains Brown, who is an Octagon veteran that has never been knocked out and won’t be fazed by fancy records or famous training partners. “The guy came in on short notice, it was his first UFC fight, he probably had never seen Stephen Thompson fight before, he probably had Googled his name and seen 60-0 kickboxing, trained with GSP, blah blah blah, and all the hype. He was probably scared out of his mind. Believe me, the UFC is an intense experience.”

In preparation for Thompson, Brown has stuck to training all over his home state of Ohio once again. He criss-crosses the city of Columbus, from Westside Barbell to Scott Sheeley’s Iron Tiger, even to the Ohio State University campus for wrestling. Also, there are the occasional trips to Jorge Gurgel’s gym in Cincinnati and up to Akron to Ryan Madigan’s Evolve MMA. For Brown, it’s all in an effort to hone his ‘come forward and often’ attack for fight night. “We're in there to find out who is better, so why not punch each other to find out who is better.”

This Saturday, nothing will be left to the imagination, as fists and feet will fly between Brown and Thompson. “I'm looking forward to the future and there's one thing on my mind and that's beating this guy,” affirms Brown, believing that his aggressive attack will be the first on the record books to overwhelm and defeat the technically sound Thompson. “I want to show the world that his kickboxing ain't what everybody makes it out to be. I think my Muay Thai is better than his kickboxing. I've said it before, I think Muay Thai beats Karate nine out of 10 times and I'm set out to prove that when we get into the cage.”

If Brown and Thompson have the striker’s duel that everyone is praying for, the only mystery will be how much their “Fight of the Night” bonus is.