Mateusz Gamrot Is Rocketing To The Top

Making waves in the UFC lightweight division has been a perennially difficult venture over the years, and accomplishing the feat may never have been harder than it is right now.

Reigning champ Charles Oliveira needed eight consecutive victories to garner a title shot, while current contender Islam Makhachev has earned nine straight wins, including a trio of terrific finishes in 2021, and still has to get through Beneil Dariush in February before a title opportunity can even be discussed.

For every known commodity in the 155-pound weight class working their way up the divisional ladder, there is an unheralded fighter doing the same thing in the shadows, and it seems like with each successive event, another competitor submits their name for Top 15 consideration.

Which is why Mateusz Gamrot entering the year without a victory in the UFC and closing out 2021 at No. 12 in the rankings is a major accomplishment and something to pay close attention to in 2022.

Gamrot arrived in the UFC in the fall of 2020 as a two-division champion under the KSW banner, brandishing a 17-0, 1 NC record. He was considered by many to be one of the top fighters competing outside of the Octagon, and a potential impact addition to the lightweight division.

But he lost his debut by split decision in a Fight of the Night-winning clash opposite fellow newcomer Guram Kutateladze, resulting in Gamrot losing a little of that shine and people questioning whether the Polish competitor was someone that thrived in a smaller promotion, but couldn’t replicate those efforts on the biggest stage in the sport.

His first chance to prove that wasn’t the case came in April opposite Scott Holtzman, a veteran with a 7-4 record inside the Octagon and the kind of pop, athleticism, and constant pressure that would trouble an overmatched adversary and produced previous victories over the likes of Alan Patrick and Jim Miller.

After controlling things in the first round, Gamrot uncorked a rapid-fire one-two just over a minute into the second frame that landed clean and took Holtzman off his feet. Competing inside the empty UFC APEX, the sound of the blows exploded through on the broadcast — thwap-THWAP! — and instantly made it clear that “Gamer” wasn’t someone that was going to be going away any time soon. 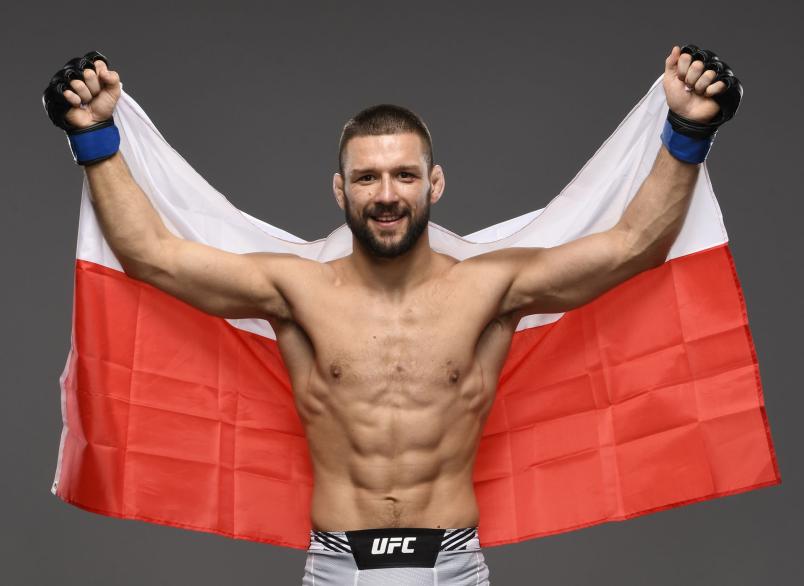 Mateusz Gamrot of Poland poses for a portrait after his victory during the UFC Fight Night event at UFC APEX on April 10, 2021 in Las Vegas, Nevada. (Photo by Mike Roach/Zuffa LLC)

If the victory over Holtzman set a baseline for where Gamrot fit within the 155-pound fold, his second appearance of 2021 carried the potential to show that his ceiling remained undefined, as he welcomed Jeremy Stephens back to the lightweight division for the first time in nine years.

Stephens, who moved into fourth place on the all-time appearances list in UFC history when he stepped into the Octagon in July, entered on a five-fight run without a victory, but each of his four losses during that time (he had one no contest in there) came against elite contenders in the featherweight ranks — Jose Aldo, Zabit Magomedsharipov, Yair Rodriguez, and Calvin Kattar.

Having missed weight for his lone appearance of 2019, Stephens was moving back to lightweight and looking to get things back on track by stopping Gamrot’s momentum before it even really got started.

Right as Michael Bisping recounted that Stephens referred to Gamrot as “an ankle-biter,” the promising Polish fighter changed levels, grabbed hold of a leg, and spun the American veteran to the canvas. Stephens started fishing for a kimura, but Gamrot spun away and attacked one of his own, pulling the veteran’s hands apart and torquing his right arm behind his back, securing the tap. 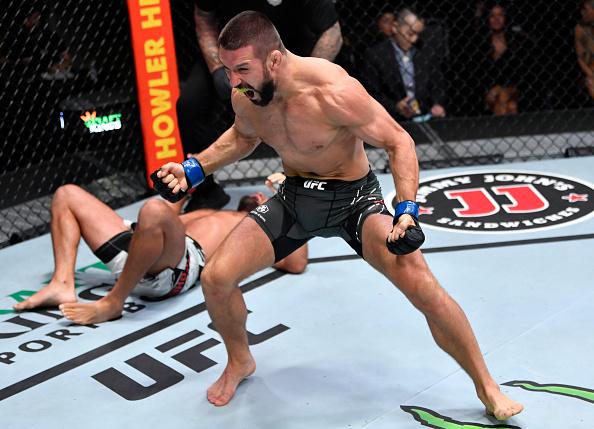 Mateusz Gamrot of Poland reacts after his submission victory over Jeremy Stephens in their middleweight bout during the UFC Fight Night event at UFC APEX on July 17, 2021 in Las Vegas, Nevada. (Photo by Jeff Bottari/Zuffa LLC)

Say what you will about Stephens’ recent form, but no one had run through the “Lil’ Heathen” like that in 33 previous UFC appearances, which made it clear that Gamrot was a real person of interest in the lightweight ranks as the second half of the year revved up.

A week after celebrating his 31st birthday, Gamrot wrapped up his year with a third appearance, taking on Top 15 staple Diego Ferreira on the main card of the year’s final event. It was the type of step up in competition that often tripped up imposters or those not yet prepared to swim in the deepest depths of the division, but could serve to catapult Gamrot into the rankings if he emerged victorious.

And victorious he was.

Following a fast-paced first round where Ferreira controlled the center and Gamrot controlled the action, hunting for takedowns and connecting with crisp counters, it was more of the same through the first half of the middle stanza. Both men appeared to be slowing ever so slightly after sprinting through the opening seven minutes and change, but their cat-and-mouse battle remained close.

With just under two minutes remaining in the second, Gamrot changed levels again, spilling Ferreira to the canvas by snatching his ankle off the mat. The Brazilian scooted to the fence with Gamrot chasing after him, settling into position behind Ferreira with his hands connected around his chest, the Top 15 fixture on a knee.

Gamrot dug a knee into Ferreira’s right side and the Brazilian winced and motioned to referee Jason Herzog that something was wrong. There was a little confusion as Herzog checked to ensure Ferreira wanted the fight to be halted, with Gamrot attacking the neck and grabbing onto a choke, unaware of what was happening.

When the two separated, Ferreira was in clear pain as he grabbed at his rib cage. Whatever the problem, it was caused by a nasty, legal knee by Gamrot, and gave the emerging contender a third straight victory.

A few days later, he debuted in the rankings, checking in at No. 12.

As fans, we can be infatuated with and leery of unbeaten fighters, often at the same time; the fact that they’ve never tasted defeat serving as both a reason to project them to great heights, but also question the level of competition they’ve faced.

And once they do lose — because everybody loses at some point (except for Khabib Nurmagomedov) — we often put a great deal of stock in that individual result, overlooking or undervaluing everything that came before it.

For fighters, I would imagine there is something freeing about getting that zero out of the loss column — an unnecessary weight and pressure cleared from your shoulders that both fills you with motivation to get back into the win column, but also allows you to fight without being concerned about protecting your pristine record.

RELATED: Where Do Things Stand In The Lightweight Division?

It’s likely doubly challenging when you arrive on the biggest stage in the sport without a loss and carrying a great deal of international acclaim, and while I can’t say for certain, I would wager that Gamrot felt both those things after getting edged out in his debut.

The result was a three-win campaign, with three finishes, and a move into the lightweight rankings, positioning the Polish fighter to enter 2022 as a dark horse contender in the ultra-competitive division.

The challenges are only going to get more difficult from here on out for him, but with the way he dominated over his last three outings, don’t be surprised if he’s in the championship conversation by this time next year, if not sooner.