Mateusz Gamrot Is 'Obsessed' With Winning The Belt

Mateusz Gamrot Hopes To Build Off The Momentum Of His First Win At UFC Fight Night: Makhachev vs Moises
By E. Spencer Kyte, on Twitter @spencerkyte • Jul. 13, 2021

Mateusz Gamrot arrived in the UFC last October with an undefeated record, a ton of hype and carrying lofty expectations, some his own, others foisted upon him by observers that watched him claim titles in two weight classes under the KSW banner.

His maiden voyage into the Octagon was hastily put together as he stepped up to replace Renato Moicano a little more than a month before the event, only to his have opponent withdraw two weeks out, resulting in Gamrot facing fellow newcomer Guram Kutateladze.

“I felt so happy and excited,” Gamrot said, reflecting on his debut as he readies to make his third appearance inside the UFC Octagon this weekend when he takes on veteran Jeremy Stephens. “After many years of hard work, I found myself in the Champions League, where I can prove I am one of the best fighters in the world.”

The fight didn’t go as he had hoped, with Kutateladze coming away with a narrow split decision win that even the victor conceded felt a little unmerited. 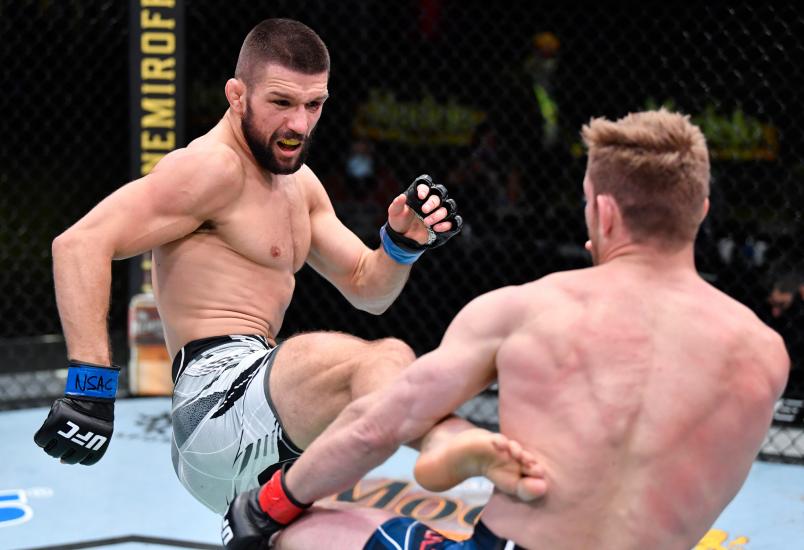 “At that time, I did three fights in four months, and the fight with Guram was the last of them,” offered the Polish standout, who earned a stoppage win over UFC veteran Norman Parke in July and a unanimous decision victory over Marian Ziolkowski at the end of August before matriculating to the UFC. “In that fight, I did not lose to an opponent, only to the judges; Guram himself even admitted this in an interview after the fight.

“Losing on points only gave me more motivation,” continued Gamrot, who rebounded from his initial setback with a second-round knockout win over Scott Holtzman in April. “Now I have even more fire and determination to dominate in the Octagon.”

In addition to the bitter taste of defeat, Gamrot draws a great deal of motivation and inspiration from the all-star cast he’s surrounded himself with at American Top Team in Coconut Creek, Florida.

Long recognized as one of the top collectives in all of combat sports, it has continued to be a premier drop-in destination for international talents looking to round out their training camps by working alongside a who’s who of elite fighters and coaches, with Gamrot one of several international stars who has opted to finish his preparations with the South Florida squad.

American Top Team is the best gym in the world and I have been watching them for a long time,” began Gamrot, explaining his reasoning for making the transatlantic journey to put the finishing touches on each of his last two training camps. “At the beginning of the year, I flew to American Top Team and trained under the legendary Mike Brown with the ATT army. I trained with Edson Barboza, Jorge Masvidal, Dustin Poirier, Renato Moicano, Thiago Moises and many more from the team, gathering a lot of experience and confidence.

“My confidence and experience went way up,” reiterated Gamrot, who showed off the full range of his skills in his April victory over Holtzman, having success with his grappling in the opening stanza before putting “Hot Sauce” on the canvas with a crisp, clean 1-2 that came 80-some seconds into the middle frame. “I am now a completely different fighter; much better and much wiser.”

While training at American Top Team is just a “working vacation” at the moment, the 30-year-old Polish lightweight has considered permanently relocating his family to Florida in the future.

After collecting a Performance of the Night bonus for his sharp stoppage win over Holtzman in April, this weekend’s pairing with Stephens presents a grand opportunity to secure another extra check on Saturday.

One of the longest tenured fighters on the UFC roster, the 35-year-old Stephens will be making his return to lightweight this weekend when he makes the walk to the Octagon for the 34th time, breaking his tie for fourth place on the all-time starts list with Brazilian veteran Demian Maia.

A fixture in the featherweight Top 15 for the last seven years, Stephens arrives looking to halt the longest run of his career without a victory — a five-fight stretch that has seen him collect four losses and one no contest verdict while sharing the Octagon with Jose Aldo, Zabit Magomedsharipov, Yair Rodrigruez, twice, and Calvin Kattar. 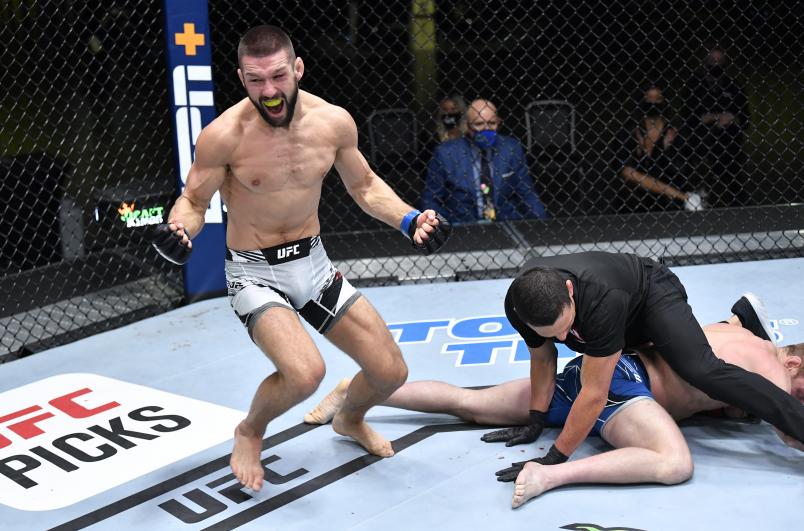 Mateusz Gamrot of Poland reacts after his knockout victory over Scott Holtzman in a lightweight fight during the UFC Fight Night event at UFC APEX on April 10, 2021 in Las Vegas, Nevada. (Photo by Chris Unger/Zuffa LLC)

Though the results haven’t been there, the quality of the competition Stephens has continued to face suggests that the now grown up “Lil’ Heathen” is still a potential force in the middle of the lightweight ranks, and a tremendous measuring stick to use to gauge where Gamrot fits within the division this weekend.

“Jeremy has a very big name in the United States and I am very happy about this,” said Gamrot, detailing why he’s excited to share the cage with the battle-tested veteran on Saturday night at the UFC APEX. “He is very experienced, a UFC legend, and it is a pleasure to fight with him because if I win, my name jumps up to the next level.

“I am hungry for success and obsessed about winning the belt,” continued the laser-focused Poland native, citing former strawweight champ Joanna Jedrzejczyk and current light heavyweight titleholder Jan Blachowicz as major inspirations as he sets out in earnest to become the third fighter from Poland to claim UFC gold.

“I am really glad that he is the champion now,” he said of Blachowicz, who successfully defended his title for the first time in March and is slated to put his belt on the line again later this year against Glover Teixeira. “I am one step, maybe two steps behind him, and just like him, I am obsessed with winning the belt.”

And he believes a victory over Stephens on Saturday will be the next step towards making that dream a reality.

“I’m growing every day at American Top Team; my skills and my power are improving and I’m chasing my dream,” he began. “My name is Gamrot, I am from Poland, and I want to go out and show the best version of myself.