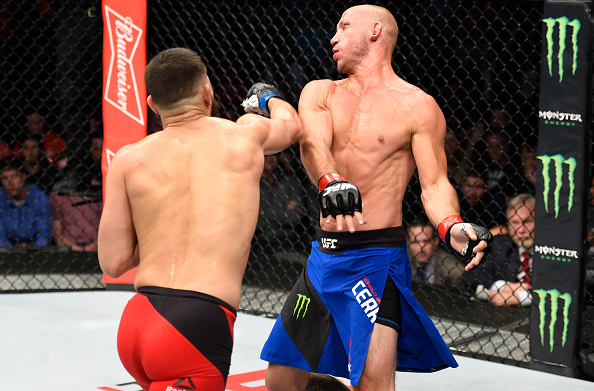 For a long time, Jorge Masvidal made no secret of his desire to fight fellow welterweight contender Donald Cerrone. On Saturday at Pepsi Center in Cerrone’s hometown of Denver, Masvidal got his wish and delivered on his boasts, stopping “Cowboy” in the second round of their co-main event showdown.

“I’m a real fighter,” Masvidal said. “I don’t take pictures on social media and all that, that’s why my name ain’t out there. But I kick ass. If you like watching people that kick ass, tune in.”

There was no shortage of action in the first round, with both fighters basically standing at close quarters and trading shots for much of the opening five minutes. Not surprisingly, Cerrone’s weapon of choice were the leg kicks that bruised Masvidal’s legs, while Masvidal’s punching attack raised a welt over the right eye of Cerrone and dropped him hard in the closing seconds, with referee Herb Dean nearly stopping the fight before the horn intervened.

Cerrone was still wobbly as round two began, and Masvidal knew it. But the Floridian took his time before lowering the boom, and when he did, he put Cerrone on the deck a second time. Cerrone gamely rose to his feet, but a follow-up barrage of body blows brought Dean in to wave the fight off. The official time was 1:00 of the second round. 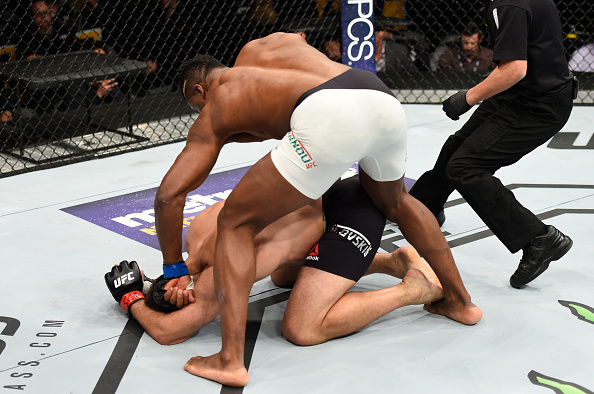 Five UFC fights, five wins, five finishes. That’s the slate thus far for Cameroon’s Francis Ngannou, who scored the biggest win of his pro career, knocking out former UFC heavyweight champion Andrei Arlovski in 92 seconds, further establishing his credentials as a fighter who could one day rule the division like Arlovski once did.

The action was tense as the fight began, as a flush blow from either heavyweight could spell the end of the fight. And that was certainly the case, in the second minute, as an Arlovski flurry was interrupted by an Ngannou uppercut that put “The Pit Bull” on the canvas. A few follow-up shots later, referee Adam Martinez had seen enough, stopping the bout at 1:32 of the opening round.

In the main card opener, Jason Knight’s third UFC win was his biggest, as he submitted featherweight veteran Alex Caceres in the second round.

Caceres’ speed and angles kept Knight guessing for much of the opening frame, but in the closing minute, it was Knight charging ahead, as he scored a flash knockdown of “Bruce Leeroy” and then slammed him to the mat and nearly sunk in a rear naked choke before the horn intervened to end the round.

A scramble to the mat in the second minute of round two allowed Knight to take Caceres’ back once again, and the Mississippi native fired off several hard punches and elbows as he searched for the choke. Caceres’ defense and veteran savvy held up for much of the round, but eventually, the tenacious Knight sunk in the rear naked choke and Caceres was forced to tap out at the 4:21 mark of the frame.