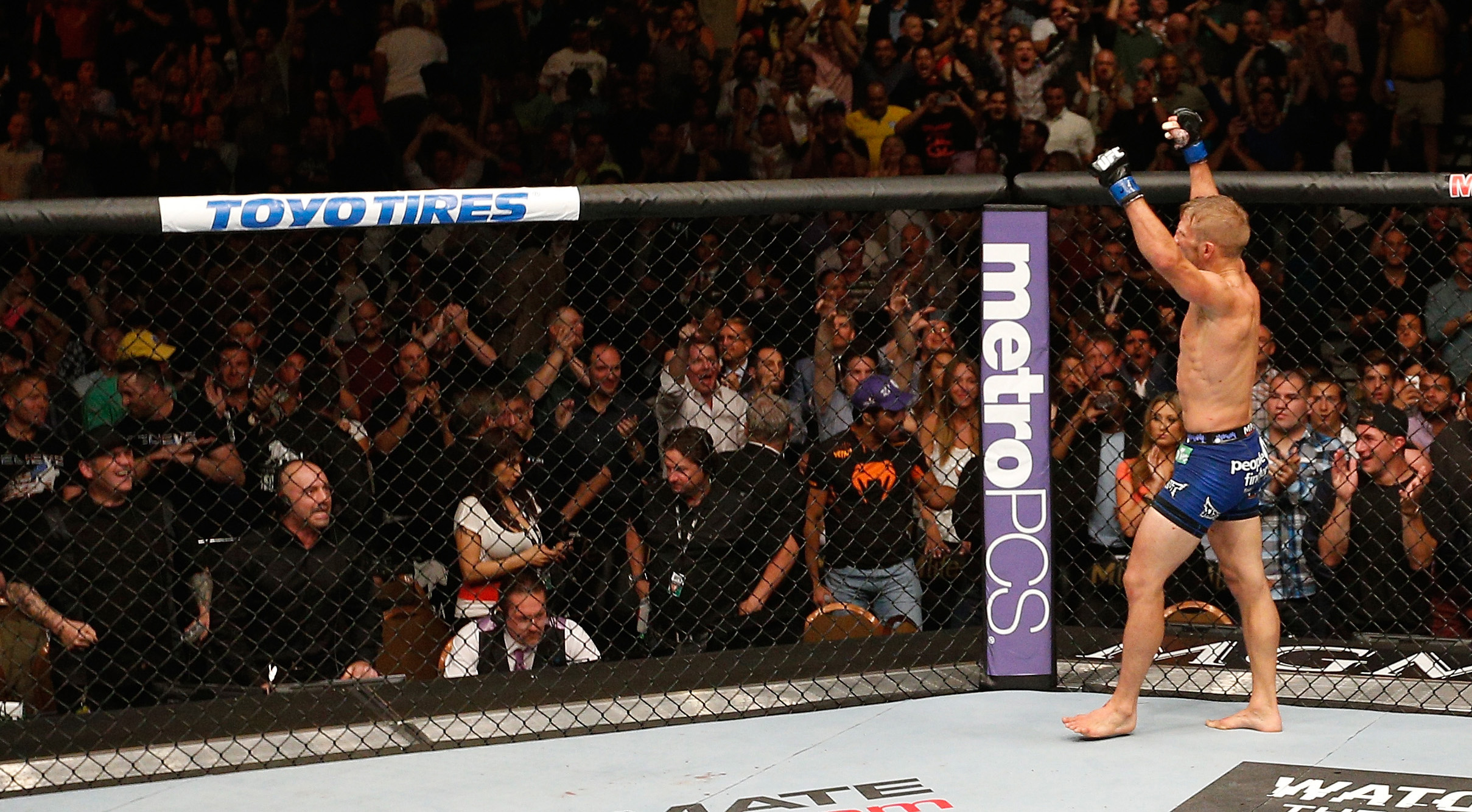 LAS VEGAS, May 24 – There are a number of stories you can take away from TJ Dillashaw’s UFC 173 win over Renan Barao Saturday night at the MGM Grand Garden Arena. You can talk about the end of Barao’s 35-fight unbeaten streak, the dominance the challenger from California showed, his win being one of the biggest upsets seen in recent years, or him giving departing coach Duane Ludwig a going away gift of epic proportions.

But you may just want to stick with the basics, and in one of the most brilliant efforts in recent years, the bantamweight division has a new champion, with Dillashaw stopping the seemingly unstoppable Barao in the fifth round.

“I’ve been looking up to the guy, he’s the best in the world and that brought the best out of me,” said Dillashaw. “I had to bring my A game.”

“It was really a tough fight,” said Barao, who had not lost a fight since his pro debut 2005. “I have to congratulate him. I’m coming back”

Both fighters fired off a variety of strikes to begin the bout, hoping to catch the other napping. That didn’t happen, but it also didn’t prevent Dillashaw and Barao from both setting a fast pace, the challenger showing no fear of his foe and Barao trying to let his opponent know who the boss was. Midway through the round, Dillashaw got the attention of the Brazilian with stiff shots to the face and his confidence seemed to be growing as the seconds ticked away. If Barao was rattled, 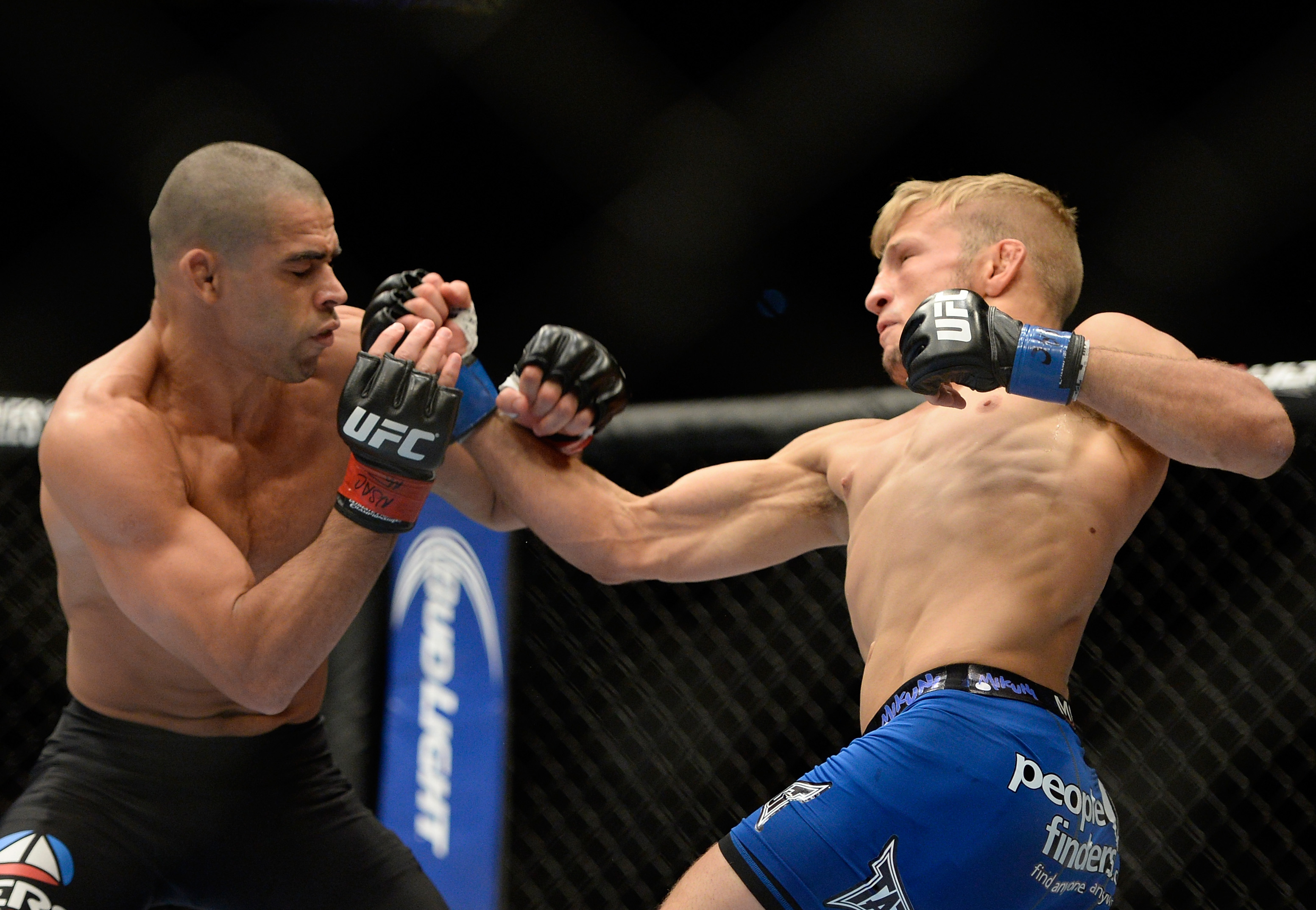 he wasn’t showing it, but suddenly a right hand dropped the champion hard to the mat with a minute left. A furious assault from Dillashaw followed, with the challenger taking Barao’s back and trying two rear naked choke attempts. Barao escaped and got out of the round, but the underdog from Sacramento was biting back – hard.

Barao opened the second with a nice 1-2, and Dillashaw – cut around the right eye, fired right back. This was a fight now, and as Dillashaw tried to take what the Brazilian had, Barao was ready to dig as deep as he had to in order to keep it. Just past the midway point of round two, Dillashaw attempted to take the fight to the mat, but Barao defended well. A low kick from Barao moments later brought a brief halt to the action, but as soon as it resumed, they picked up where they left off, Dillashaw confidently landing with a blinding series of punches and Barao doing his best to not just stay in the fight, but to win it. Dillashaw wasn’t making that task easy though.

If Dillashaw’s pace wasn’t fast enough, he tried to go into another gear as round three opened. That would normally be a suicidal tactic against a fighter like Barao, but Dillashaw made it work as he tagged “The Baron” over and over, bloodying his nose and forcing him to even switch stances in a futile effort to alter Dillashaw’s rhythm. And with less than a minute left, Barao got rocked again, putting the stamp on another round for the challenger.

By the time the fourth round arrived, Dillashaw wasn’t going anywhere and the only thing keeping Rio de Janeiro’s Barao going was his heart and the occasional spinning back kick which had lottery-esque intentions but not the execution or power behind it. After one such missed kick, Barao stumbled to the mat with Dillashaw following him there. Even there, the 28-year-old Dillashaw was in control, and as the horn sounded, he was five minutes away from a championship. 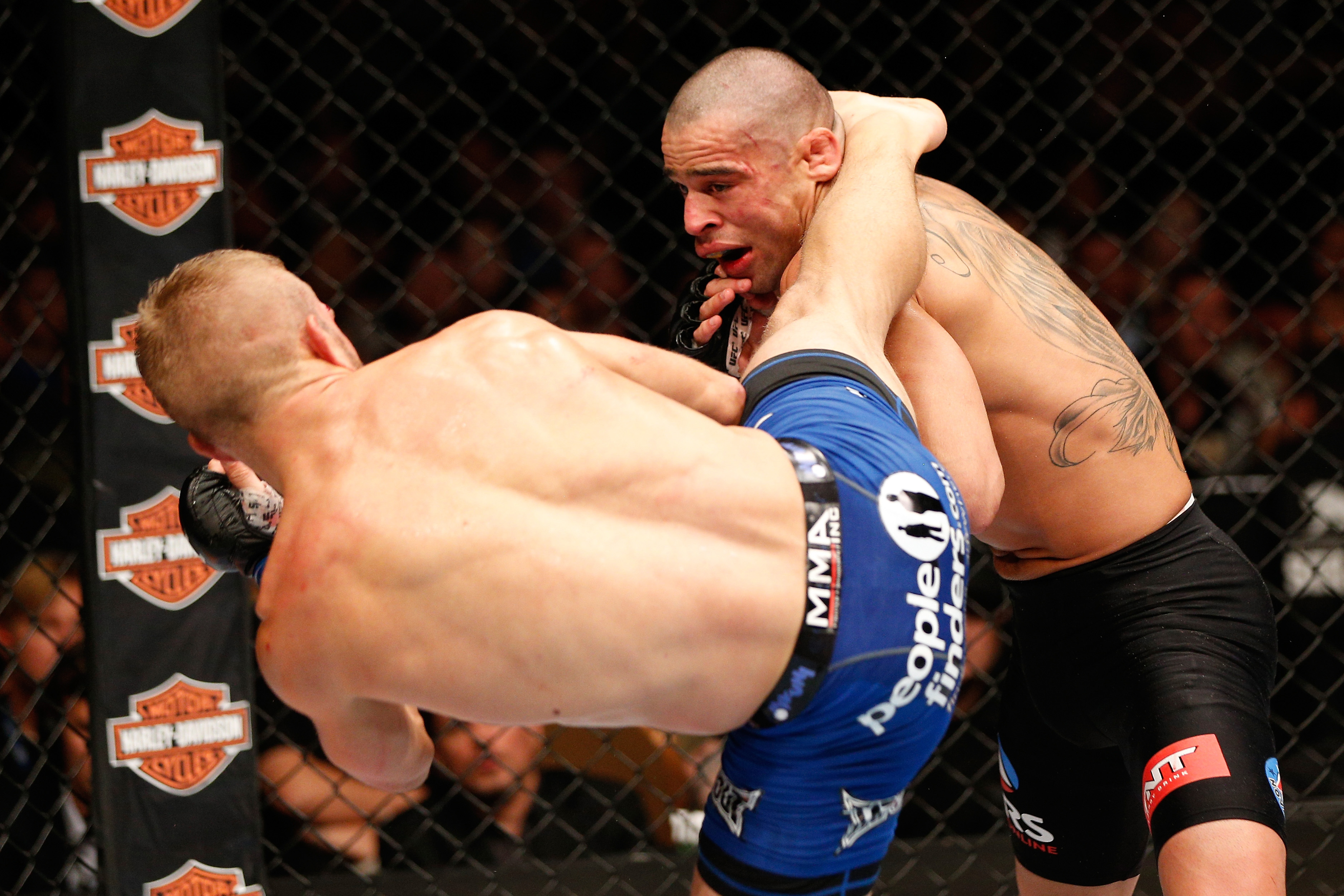 But it wouldn’t take that long.

Continuing to press the action and fire off flush shot after flush shot, Dillashaw closed the show in the fifth round, and with the bloodied and battered Barao still trying to fight back, the final punches sent him sprawling to the canvas. A few unanswered blows later, and referee Herb Dean intervened at the 2:26 mark.

Just like that, a champion was born. Now that’s your storyline.