"Right now I think I’m in the right place at the right moment and I don’t feel my age at all right now." - Patrick Cote 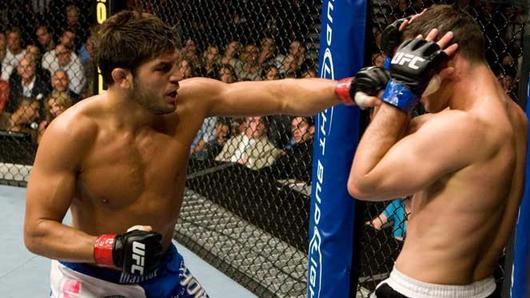 As Patrick Cote approaches the tenth anniversary of his UFC debut against Tito Ortiz back in October of 2004, I had to ask him whether it feels like nearly a decade since that first fight in the Octagon.

“Sometimes when I wake up,” he laughs. “But seriously, no. I think with the knowledge of nutrition and training, you can go a little bit further in your career when it comes to age. I just turned 34, but I feel so good. I’ve never felt better, and I know it sounds cliché, but I’m seriously in the best shape of my life, and that’s the truth. I’m more mature, I’m in great shape, and I know a lot more than when I was just 25 or 26. Back then I just wanted to go into the cage and fight no matter what, and there was a little less strategy and more of just wanting to give a good show. Right now I think I’m in the right place at the right moment and I don’t feel my age at all right now.”

On Wednesday, “The Predator,” now a 170-pound welterweight and not a 205-pound light heavyweight like he was against Ortiz at UFC 50, will face Kyle Noke in the traditional season end meeting of coaches from The Ultimate Fighter. With a win, Cote will have won seven of his last eight bouts, leading credence to the idea that like a fine wine, he is getting better with age. He’s not a bad coach either, as the two TUF Nations final bouts contain four members of his Team Canada.

“That was our goal, to have a Canadian fighter as champion of The Ultimate Fighter, finally, after so many seasons,” said the Quebec native. “I came close to being the first one, but I lost in the final on season four. And though I did what I wanted to do with my guys, at the end of the day, they fought. They fought really hard and trained really hard and I’m just happy that those guys are in the final, and I wish the best to the four guys there.”

It wasn’t exactly full circle for Cote, who was a UFC vet before appearing on the comeback season of TUF back in 2006, but it was a reminder of what it was like to be the hungry kid hoping for his shot in the big show, while also helping him remember that in the fight game, simple is often best.

“When you coach, you realize that sometimes some really simple things work, and you go back to the basics,” he said. “That’s how you win fights. You don’t win a fight with flying armbars or flashy stuff; you win the fight when you do simple stuff and you do it well. Training with those guys, I could see the game from the outside as a coach, and I saw those guys improving throughout the season and that was awesome. I took advantage of the coaching aspect to put back into my fighting style. For me, it was a great experience and I just have good things to say about it.”

He also has good memories of the Ortiz bout, even though it served him his first loss, and in his UFC debut no less. But we have to remember that there were extenuating circumstances surrounding the decision defeat.

Originally scheduled to make his UFC debut against Marvin Eastman in the first prelim fight on the card headlined by Ortiz’ bout with Guy Mezger, Cote instead got a call to replace Mezger, who was removed from the fight due to medical reasons. That call came four days before fight night.

“I was probably the last one they asked to fight Tito Ortiz,” laughed Cote. “They probably asked everybody else on the card, everybody else on the UFC roster too, and the last choice was me, and I said ‘why not, let’s do this. Four days later I was in the main event of my first UFC fight against a guy who was on the screensaver on my computer and he wanted to kill me.”

It was a gutsy move for the Canadian, just 5-0 at the time, to take on an established fighter like Ortiz, a former light heavyweight champion who was arguably in his prime at that moment.

“It was a good thing because I didn’t have time to get nervous,” he said. “Everything went so fast. I blinked and I was in the cage, and after that, it was done.”

Cote went the distance with Ortiz, losing a unanimous decision, but in the process he hurt “The Huntington Beach Bad Boy” in the first round and earned respect as a “real fighter.”

“I made my name with that fight, even though I lost,” he said. “In life, you have some opportunities in front of you and you have to choose if you’re gonna take it or not. A lot of people say that I was lucky to have the opportunity, and they’re right, but at the end of the day I said yes.”

And he almost pulled off an epic upset, but looking back, Cote is happy with the way things eventually turned out.

“Thirty seconds into the first round I rocked him, but after that I made a couple of rookie mistakes,” he recalled. “But I’m going to tell you the truth – the best thing that happened to me was losing like that. It sounds crazy, but I wasn’t in the right weight class or at that level at that moment. Can you imagine if I knocked Tito Ortiz out in the first round when Tito was still on top? Who’s next? At that time it was Vitor Belfort, Chuck Liddell, or Randy Couture. So what happened was the perfect thing. I gave a good performance, I showed that I was durable, I received maybe 300 elbows in my face (Laughs), but I was still on my feet at the end, and I changed weight classes after that.”

From there, it was a rollercoaster of good nights and bad nights, a 2008 middleweight title fight against Anderson Silva that ended prematurely due to injury, and eventually, a move to welterweight that injected new life into his career. Yet through it all, Cote’s end game is the same as it always was.

“For me, the goal is always the same - I want a title fight, I want to be the champion,” he said. “If you don’t do this to be the best, I don’t know why you do it. I woke up every morning for the last 13 years to be a world champion in the UFC, and it’s not gonna stop tomorrow.”