Marvin Vettori: No One Can Stop Me

Middleweight Contender Marvin Vettori Has His Sights Set On Defeating Kevin Holland And Proving He's The Best In The World.
By Zac Pacleb, on Twitter @ZacPacleb • Apr. 8, 2021

After what was a mad scramble to Marvin Vettori’s first main event in December, the intense middleweight found himself in a back-and-forth affair with a Top 5 middleweight, often with the upper hand. Vettori rocked Jack Hermansson early and, in the end, “The Italian Dream” scored the biggest win of his career in a Fight of the Night effort.

Notorious for his intensity at all times but particularly during a fight, Vettori said his first experience fighting five full rounds in the Octagon unlocked a new level of calmness for him in the cage.

“It’s different,” Vettori said. “I’m an animal. I’m a machine. Last time, I was prepared, but I wasn’t prepared to go five rounds, and I did go because I’m still prepared, and now I’m really prepared for five rounds. I’m a different animal, and I can’t wait to show it.”

Vettori made it a point to show respect to Hermansson immediately after the fight, telling him they “both got better” because of the fight. Of course, Vettori was the one who came out with the better position, and perhaps no fighter made a more opportunistic rise up the rankings in 2020.

The circumstances around Vettori’s big win over Hermansson added to its magnitude. Scheduled to fight “Jacare” Souza a month later at UFC 256, Vettori stepped in when COVID-19 forced Kevin Holland to pull out of the fight with Hermansson, giving Vettori the spotlight for which he’d long been pining.

"There is nothing that these guys can do to stop me."@MarvinVettori didn't mind the switch of opponent from Darren Till to Kevin Holland because he believes the result would be the same 🔊⬆️ #UFCVegas23 pic.twitter.com/DN0DRel7kq

“I think I showed the division that I belong to the Top 5,” Vettori said. “I believe I’m the best in the world, and I’m going to show it. I also learned about myself. You always learn, and it was good.”

Coincidentally, Holland stepped in to face Souza at UFC 256, scoring a big knockout win, and because Darren Till was forced to pull out of the fight with Vettori due to injury, the two are set to face each other in the main event on April 10, live on ABC.

When Vettori first learned the news about Till, frustration naturally set in. Much of Vettori’s 2020 campaign was held up with an on-again, off-again matchup with Karl Roberson that finally saw its definitive end when Vettori scored a first-round submission last June. Although the circumstances around Till pulling out are understandable, Vettori’s overall frustration with losing fights is clear.

“The responsibility is still to show up and defend your spot and defend what you stand for,” he said. “If you can’t do it, then, by default, I’m taking your spot. It’s a battle. This is not just an appointment like, ‘Oh, I’ll see you at three o’clock,’ and you don’t show up. This is a battle. I’m coming to take your spot, and not just your spot, your head. You don’t show up, to me, you lose by default. I don’t know, man. It’s messed up that not normal is almost becoming normal for me where I always have these people falling through, and I’m still showing up, and I’m still doing everything right. It just shows that I’m an elite professional, and I do my job to the fullest.”

That job now requires his eyes and mind to shift to the fast-talking Holland, who just a few weeks ago fought in his own first UFC main event against Derek Brunson. The performance disappointed some, however, and it ended with Brunson earning a relatively dominant unanimous decision win.

As “Trailblazer” has made his signature, though, he jumped at the chance to headline another card within a month’s time, and naturally, Vettori is not flustered by the last-second change, even against someone as casually unpredictable as Holland.

“He’s a wild guy,” Vettori said. “I almost think that he doesn’t even know what he’s going to do right before entering the cage, so you have to be prepared for the unknown, in a sense. I just do me. I stay methodical and pressure him and use my skills. Fundamentals and technique will always beat wildness. Always. Always. It’s just a fact. I’m just a way better fighter. I’m going to pressure him and create those cracks and capitalize on those mistakes and that’s it. Whatever he’s going to do, if he thinks that talking will help him in the fight, do it. I’ll do me. I’ll focus on myself.” 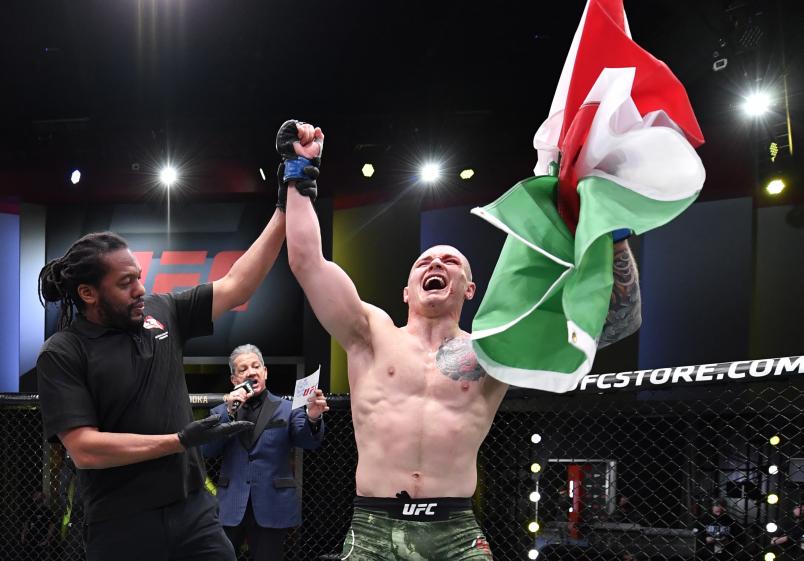 Marvin Vettori of Italy reacts after his unanimous-decision victory over Jack Hermansson of Sweden in a middleweight bout during the UFC Fight Night event at UFC APEX on December 05, 2020 in Las Vegas, Nevada. (Photo by Chris Unger/Zuffa LLC)

If things are going Vettori’s way, it often means his domineering presence in the Octagon is controlling the pace, action and flow of the fight. A solid, powerful striker with good, technical grappling, Vettori is one of the best in the UFC at negating his opponent’s attacks and keeping them off-balance. Vettori’s goal is always to make his opponents “quit.” He claims he saw Roberson quit, and he even said he saw Hermansson do the same but gave the Swede props for recovering to make a push late in the fight.

Naturally, he expects to do the same against Holland despite the last-second change from Till’s southpaw, Muay Thai-based attack to Holland’s rangy striking from a mostly orthodox stance. Even so, Vettori and his crew from Kings MMA feel supremely confident that he’ll show once again he is worthy of his Top 5 status in the division, and soon enough, a shot at the middleweight belt and another crack at Israel Adesanya.

“At the end of the day, different guy, same result,” Vettori said. “The little adjustments that had to be made have already been made, and as much I’m ready to go, there’s nothing that these guys can do to stop me.”