Marvin Vettori Keeps Betting on Himself

To watch Marvin Vettori fight – or just observe him in general – is to watch the personification of controlled intensity. It radiates off him in the way he marauds around the Octagon, and in certain instances like his recent first-round submission win over Karl Roberson, it erupts.

When asked about where that fire comes from, he laughs knowingly before providing a self-evaluation.

“All the people, when they talk about me, they say I’m an angry person,” Vettori told UFC.com. “I don’t know if I’m angry. I definitely have a lot of energy. I don’t know. Every day of my life, I wake up, and I’m away from my family. This means a lot to me. I live where I live just to follow my dream and just to become number one at what I do. There’s no way for me to not think that way whenever I wake up in the morning. If I had to choose, I wouldn’t live in California. The fact that I live here when I wake up in the morning, it reminds myself every single f***ing day that I’m here for a f***ing reason, and I’m never going to forget that. I know how hard I work, and that’s one of the reasons why I work so hard because I remind myself of that, and I know the sacrifices that I made.

“A lot of people talk about sacrifices. Real sacrifice is leaving a place you love, leaving everything and just following your dream by yourself.”

His home for the time being is Huntington Beach, California, the home of Kings MMA and half a world away from his home country of Italy. Before making the full-time move to California in 2016, Vettori spent time in England as well as a period splitting time between Italy and California for camp.

It’s from there that he is driving to Las Vegas to step into a main event slot against Jack Hermansson on short-notice after Kevin Holland pulled out of the bout due to a positive COVID-19 test. It’s a fitting way for Vettori to find his way into his first main event – he’s had a string of cancelled and rescheduled fights in the last year – but Vettori’s deadpan confidence remains unflappable amidst all the change.

“To be honest, I think I’m going to destroy this guy,” he said. “In all honesty, I think I’m better than this guy anywhere. He thinks he’s a good grappler. Guess what? I’m a better grappler than him. If you want to grapple, let’s grapple until he’s dead tired, and then I’m going to knock him out. To be honest with you, I know he beat Jacare (Souza), but from my standpoint, I think it’s actually a better matchup for me. If I was him looking at my fights – and I’m sure he’s saw me before – I’d be asking myself a lot of questions.”

While that’s a bold statement to make when facing the No. 4 middleweight contender in the world who is fresh off a first-round submission win over Vettori’s Kings MMA teammate, Kelvin Gastelum, all one needs to do is look at Vettori’s record to understand his belief.

Since returning from a USADA suspension that kept him out of action for a year, Vettori is 3-0, and his only loss in the last three years came in a split decision against middleweight champion Israel Adesanya. The only thing that gives him any slight pause is the prospect of fighting five rounds for the first time, but even then, the 27-year-old is – you guessed it – confident in his ability to swim in deep waters if need be. 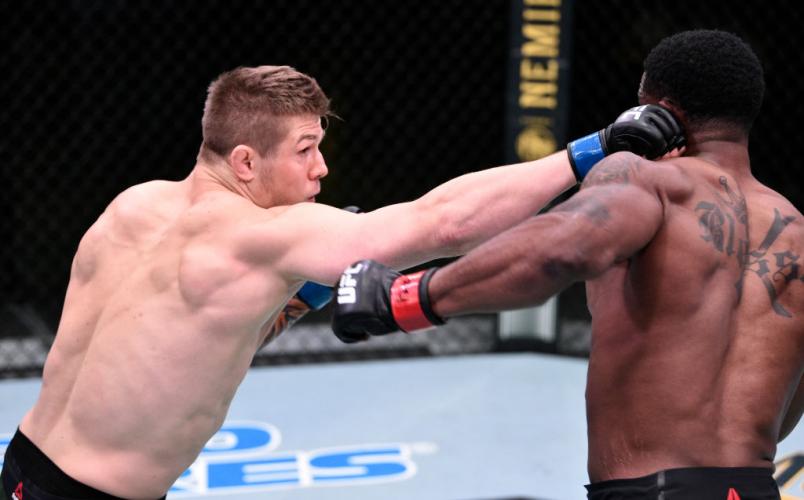 In Hermansson, Vettori knows he faces a fighter who enjoys a fast start – five of Hermansson’s eight UFC wins have come inside the first round – but he isn’t concerned about matching that work rate.

MORE UFC VEGAS 16: Montana De La Rosa Is Coming Into Her Own As A Fighter | UFC Vegas 16 Fight By Fight Preview

“I know I have a helluva push,” Vettori said. “I’m not worried, man. I train to fight tired, too. Obviously, it’s not ideal, but you also have to learn how to fight tired and to keep composure through tiredness and through adversity, through when s*** doesn’t go your way. I’m ready for that. I saw a couple of fights where he quit. He has a quit in him. He can grind it out for a long time, and he fought a lot and won decisions, but when he gets hit hard and when he takes good shots, he doesn’t like it. He doesn’t like that at all. I’m looking forward to finishing this fight actually earlier than five rounds, but if it goes to five rounds, let’s do it.”

To exude such belief in his preparation ahead of the biggest fight of his life is a credit to his everyday work ethic. Vettori said he hasn’t ever really considered moving back home to Italy since relocating to California. It’s just the reality of the sacrifices necessary to live out his dream.

Vettori has built his bulletproof mentality on the mantra, “adapt and overcome.” It’s what drove him to leave for England at 18 years old not knowing any English, and it’s what pushed him to the California coast when it became evident that traveling all over Italy to find quality training couldn’t come close to the quality he could find at Kings MMA.

“If I compromise, I know I’m going to compromise for the worst,” he said. “A lot of people try to convince themselves (otherwise) because it’s too hard to make it happen, to stay that way, to stay constant, and to make this sacrifice day after day. I know a lot of people that came here for a while, and it’s hard. It’s f***ing hard.”

When Vettori makes the walk for his headlining bout on December 5, he’ll make history as the first Italian-born fighter to headline a UFC card. It’s a milestone he takes pride in, admitting he smiles every time someone brings it up to him.

He hopes the “massive” moment inspires those back in Italy, especially aspiring mixed martial artists. But at the same time, he is aware he didn’t get to this spot just through sheer work and determination. He earned results, and he knows results are the only way to achieve his goals of becoming champion (and getting another shot at “The Last Stylebender”) in 2021.