Martinez Has Mind Set On Being Ranked

Jonathan Martinez is a bantamweight, and he’s only three fights into his UFC career, but he does have a little bit of a Chuck Liddell thing going on when it comes to his demeanor. See, the “Dragon,” like “The Iceman,” doesn’t particularly care for talking about himself, but since it’s part of the gig, he’ll do whatever’s asked of him.

I thought it would be to do a hundred interviews.

“Oh man,” he laughs. “That’s the worst part right there. I forgot who told me, they were like, ‘Jon, you need to talk. If you don’t talk they’re not gonna want to interview you. I said, ‘Okay, that’s good.’”

Martinez laughs again, not exactly warming up to the process, but not looking at it like a walk to the electric chair, either. And like Liddell, he’s a heck of a nice guy. Interviews are just not his thing. So let’s change the subject to his homecoming fight in Houston on February 8 against Andre Ewell. 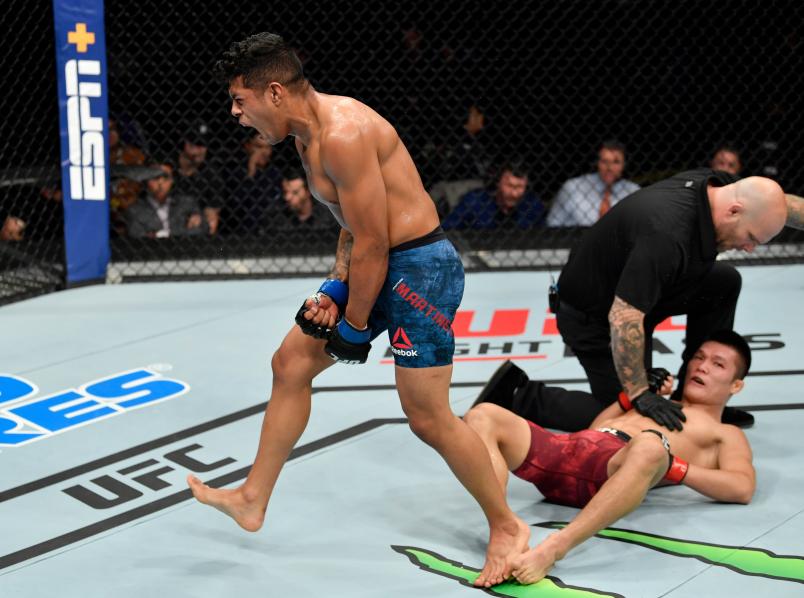 SACRAMENTO, CALIFORNIA - JULY 13: Jonathan Martinez celebrates after knocking out Liu Pingyuan of China in their bantamweight bout during the UFC Fight Night event at Golden 1 Center on July 13, 2019 in Sacramento, California. (Photo by Jeff Bottari/Zuffa LLC/Zuffa LLC via Getty Images)

SACRAMENTO, CALIFORNIA - JULY 13: Jonathan Martinez celebrates after knocking out Liu Pingyuan of China in their bantamweight bout during the UFC Fight Night event at Golden 1 Center on July 13, 2019 in Sacramento, California. (Photo by Jeff Bottari/Zuffa

But that’s not really a homecoming, since it’s a nine-hour drive from Plainview to Houston. But hey, it is Texas, and if it’s in the United States, Martinez’ family is making the trip.

“It’s far away, but it feels good,” said Martinez. “Still, even though it’s nine hours away, my parents and family travel everywhere I go if it’s here in the United States. They don’t mind driving nine hours. The last time I fought (against Liu Pingyuan), I fought in Sacramento, so they took a trip over there.”

And if you’re a Texan, it doesn’t matter where in Texas you’re from – you’re getting cheers in Houston. But Martinez knows that when the Octagon door shuts, it’s still all about business.

“I just look at it as a fight,” said Martinez, who currently trains with the Factory X squad in Colorado. “It doesn’t really matter where they put me; it’s the same Octagon, so honestly, I don’t even get nervous if it’s in my hometown or close to home. I just go in there and fight.”

It must be nice being at home, though, considering that he’s collected stamps on his passport from Canada and Australia in his first two UFC bouts. Especially Australia and that notoriously long flight down under.

“I wouldn’t mind,” he said of returning to Melbourne, where he earned his first Octagon victory over Wuliji Buren last February. “My teammates Youssef (Zalal) and Devonte (Smith) had to wake me up and see if I was okay because I slept the whole way. (Laughs) I woke up and we were three hours away.”

Now he’s just showing off. And as far as the fighting went, he got a victory, then followed it up in Sacramento in July with a Performance of the Night knockout of Liu that upped his UFC record to 2-1 and his overall slate to 11-2.

“Yeah, it feels good now,” he said. “I feel pretty good fighting in there and getting wins.”

“My debut fight I was nervous,” Martinez said of his October 2018 loss to Andre Soukhamthath. “I was in the back, looking at the TV and the people around, and I’m like, ‘Man, I’m in the UFC and I’m about to come out right now.’ And then I wasn’t nervous walking in, but once they mentioned my name, that’s when it’s like, ‘Oh man, I’m about to fight.’ And I got really nervous. But after that, when I fought in Australia I wasn’t nervous, Sacramento I wasn’t nervous.”

That doesn’t mean he’s overlooking Ewell. For this “Dragon,” he looks at every fight as the toughest of his career.

“To me, every fight is hard,” Martinez said. “I just go in there and do my job. I train hard every day at the gym, so it’s just another opponent.