Martin Kampmann - "The Hitman" Takes Aim at the Welterweight Division 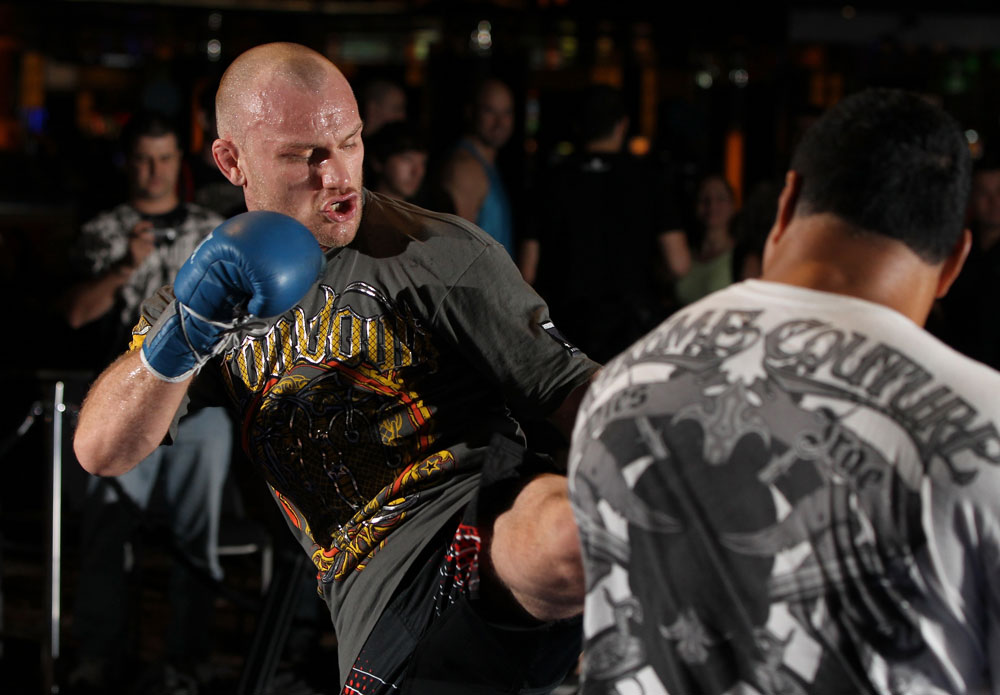 With all the turbulence at the top of the welterweight division, it’s easy for a contender or two to get lost in the shuffle, overlooked in the discussions of who will emerge from the 170-pound ranks by the end of the year.

Between the Condit-Diaz-St-Pierre situation and the rise of Johny Hendricks and Jake Ellenberger, one fighter who has slipped into the shadows is Martin Kampmann, the 29-year-old Dane known as “The Hitman.”

Part of what has pushed the long-time Xtreme Couture team member into the background is just how well he embodies his nickname inside the cage.

Kampmann is one of the most technical strikers in the sport, and he’s sneaky good on the ground as well. He’s quick, precise, and accurate, with very few wasted movements. Everything is crisp, clean, and on the mark, and at times, that ability to pick opponents apart gets overlooked by the judges in favor of the more demonstrative efforts of his opponents.

You could make a case that Kampmann should be entering Saturday’s UFC on FX 2 main event against Thiago Alves in the midst of a five-fight winning streak. Prior to beating Rick Story at UFC 139 last November, Kampmann dropped a pair of close, debatable decisions to Diego Sanchez and Jake Shields.

The former still eats at him nearly a year later, while he uses the latter as a learning experience.

“I definitely feel that I got screwed when I fought Diego,” Kampmann says curtly, clear evidence that the unanimous decision victory handed to Sanchez still stings a year later. “I should have won that, and everybody knew that I won that fight. He was hurt and beaten up after that fight, and I won it, but I got screwed by the judges.

“When I was fighting Jake Shields, I kept going for submissions, and I ended up losing the fight. If I had played that fight safe and just stayed on top like he was doing, I would have won the decision. I was trying too hard to finish and get a submission, which was a mistake on my part. I should have just stayed on top and pounded him out. I gave that fight away by fighting stupid.”

Eight months after the controversial loss to Sanchez, Kampmann systematically picked apart Story in San Jose, peppering the aggressive and powerful wrestler with his precise boxing.

By all accounts it was a clear victory for Kampmann, which is why a look of panic and confusion swept across his face as UFC ring announcer Bruce Buffer read off a split decision (a unanimous decision was later revealed to be the correct verdict).

“You can see the look on my face when that decision was being announced. I thought `What the F?’ I couldn’t believe what I was listening to when they announced that. I was disappointed I didn’t get the finish, but I was relieved that I got the win; I needed that.”

Though he was happy to get back into the win column for the first time since systematically picking apart Paulo Thiago at UFC 115 in June 2010, Kampmann wasn’t satisfied with going to the judges.

“I really wanted to get that finish. I’m tired of going to judges’ decision, especially because they don’t seem to see things my way at all. It doesn’t matter what I do; they have something against me, I guess. I’m going in there to finish Thiago Alves, and the judges won’t have a say.

“I used to always get finishes, but sometimes when you fight the best guys — when you’re fighting top guys — sometimes it can be hard to get the finish within those three rounds. When you’re fighting the best, it can be tough to finish, but I’m definitely going in for the kill. I used to have a bunch of first round finishes, and I used to get finishes all the time. I want to go back to that; I want to finish people.”

After earning three first round finishes in his initial four UFC victories, Kampmann has only earned two finishes since, stopping Alexandre Barros in the second round of his welterweight debut at UFC 93, and submitting Jacob Volkmann just over four minutes into the opening round of their encounter at UFC 108.

His 13 fights in the UFC have produced a 9-4 record and carried him into the top 10 in the welterweight division. More importantly, perhaps, they’ve helped the analytical Kampmann fine-tune his approach in the cage, identifying what works best, and what pitfalls to avoid in his upcoming bout with Alves in Australia.

Kampmann sees what he calls “Intelligent Aggression” as the key, not only in Friday’s UFC on FX 2 main event, but long term. He credits Paul Daley with teaching him the importance of this particular approach.

“If I get hit with a good, solid punch, my first instinct is to step in the pocket, and start firing back because I want to hit that sucker back, but sometimes that’s not the smartest decision. Sometimes you’ve got to take a step back, circle a little bit, take a couple seconds to get your composure back, and then you can go in and try to get him back. It doesn’t have to be right away; that will put you at risk. I definitely learned that from fighting Paul Daley.

Like Kampmann, Alves has drifted into the background of the UFC’s deep and talented welterweight division.

After piling up seven consecutive victories en route to facing Georges St-Pierre for the welterweight title at UFC 100, “The Pitbull” hit a rough patch, losing two of his next three fights after dropping a one-sided decision to St-Pierre.

Two weeks before Kampmann rebounded with his win over Story at UFC 139, Alves earned his first submission victory in the UFC, forcing newcomer Papy Abedi to tap to a rear naked choke in the opening round of their encounter at UFC 138.

It was the best Alves has looked in two years, but Kampmann is confident that he has the approach and arsenal needed to beat the long-time American Top Team trainee, and anyone else in the welterweight division.

“Thiago’s a tough opponent; he’s fought some tough guys. He’s beaten some really tough guys like (Josh) Koscheck, and (Matt) Hughes. He’s not an opponent to take lightly, but I’m going to go in there and beat him, and we’ll take it from there after that.

While some see this contest as a chance for Kampmann to emerge from the shadows and establish himself as a contender, the talented Dane completely disagrees with that assessment, and where most people put him in the pecking order.

“I am a contender, man!” Kampmann barks, frustrated by the insinuation that he’s one the outside looking in when it comes to the welterweight title chase. “I’m a contender already. I got screwed against Diego. Jake Shields — you could make an argument for that fight even though I gave that fight away by fighting stupid. I can beat the best there is, and I’ve proven that. I am a contender, and I want to fight for the title.

“I’ve got a win over (Carlos) Condit,” Kampmann adds, citing his April 2009 split decision victory over the current interim champion as further proof that he deserves to be considered amongst the top contenders in the welterweight division. “I’m the only guy in the UFC with a win over him, and I’d love to fight him again.”

In fact, Kampmann is the only man to defeat Condit in the last five-and-a-half years. Given the opportunity, he can hang with the interim champion or anyone else in the 170-pound ranks for that matter, because as good as he’s been so far, “The Hitman” promises that the best is yet to come.

“I want to fight the best guys in the division. I’ve fought some of the best guys, and I’ve shown I can beat the best, and I still have a lot more to show. The UFC hasn’t seen the best of Martin Kampmann yet.”