Read on for the latest installment in UFC.com's weekly series of articles on proper nutrition from the biggest names in mixed martial arts...this week, Martin Kampmann

No offense to Diego Sanchez, but there is no doubt in my mind that Martin Kampmann deserved to have his hand raised after their bloody fisticuffs. And Kampmann vs. Jake Shields … well, I believe the wrong guy (Shields) got the nod that night, too.

So, in my view at least, Kampmann has rattled off seven straight wins against a virtual murderers row in the UFC’s welterweight division. When I study the Denmark native’s trail of conquests over the past three years – including Jake Ellenberger, Thiago Alves, Rick Story and Paulo Thiago - I am dumbfounded as to how such a crowd-pleasing, top-notch fighter isn’t more revered and appreciated by fans. The Las Vegas transplant should be knocking on the door of stardom, to be honest. The fact that he has thus far been underappreciated must be somehow tied to his relatively low-key personality, because when it comes to drama and action, even the great Georges St-Pierre’s fights pale in comparison to a Martin Kampmann bout. The latter leaves it all in the cage every time and always daringly hunts for the finish.

So I’m plenty hyped to watch Kampmann battle heavy-handed Johny Hendricks Nov. 17 in the UFC 154 co-main event, mindful that the outcome might determine the No. 1 contender at welterweight. I caught up with Kampmann this week and picked his brain about the nutrition plan he relied upon to get down from 205 pounds for the most important fight of his life.

AFTER HIS LAST FIGHT IN JUNE (KO OVER ELLENBERGER)

I had knee surgery after the fight and got up to 205 pounds. After a fight I’ll eat anything. I like meat but don’t eat much meat during training camp. After a fight, though, I might go to Texas de Brazil and go crazy. Or I’ll stock up on Ben & Jerry’s ice cream and I’m glad that only comes pint-sized and in small sizes because otherwise I’d eat too much of it. If I’m not training for a fight I love In & Out Burgers. They’re great. But I can’t eat three Double-Doubles at In & Out, have a milkshake and then go train. You wouldn’t want to eat that and then get punched in the stomach, that’s for sure.

After the Ellenberger fight I went home to Denmark and ate a lot home cooking. I didn’t get to do any cardio or MMA training so I got a little heavy.

I have been heavier for this fight than usual because of the knee surgery. A week and a half ago I weighed 195 (pounds). So I’ve had to worry about my weight a little earlier than normal. Usually I don’t think about it until two weeks before the fight. But this time I started cutting down early on how much I eat.

But usually cutting to 170 is no problem at all. Even when I was fighting at 185, I could eat whatever I wanted and then, two weeks before the fight, I would start cutting down on my calories.

When I’m in Denmark I eat a lot of seafood. We have a lot of good dairy products, including a special kind of chocolate milk. The milk in stores is guaranteed to come from the cow within the past 24 hours, so it’s very fresh.

Of course we have good Danishes and candy stuff, though I don’t eat them as much. I love Smorrebrod, which is an open-faced sandwich that most Danish people eat. It’s a special kind of dark bread covered with salami, seafood – any kind of toppings. You eat it with a knife and a fork. I love that.

I eat a big bowl of raw (uncooked) oats with unsweetened soymilk every day. I’ll put some raisins or 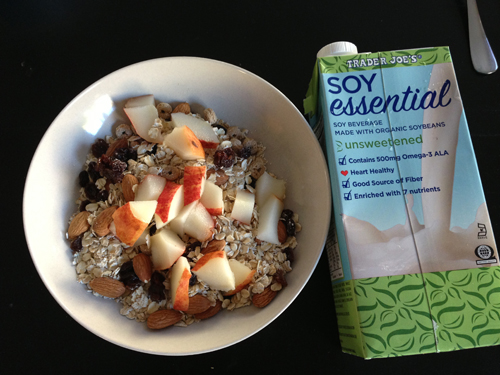 strawberries on top. I eat it like it’s cereal. It’s a solid meal that gives me good energy and keeps me going the rest of the day.

After my morning practice I’ll usually eat some brown rice or quinoa with vegetables. I try to eat healthy. I stay away from red meat during camp and eat a lot of fish and salmon. Sometimes I will eat Rugbrod (the dark and seeded bread that is popular in Denmark), which is like a Rye bread and is very healthy (high in whole grains and fiber).

For dinner I eat similarly. I’m very fortunate to have a wife that cooks. She makes me lasagna, salmon, stuff like that. Maybe some brown rice or quinoa, baked yams, onions, beets or a salad on the side.

THE HITMAN’S TAKE ON SUPPLEMENTS

I’m not a big supplement guy. Sometimes I might take a greens supplement or a multi-vitamin, or a protein powder with no flavor and little additives. I might mix the protein powder into a fruit smoothie with orange juice and frozen strawberries, otherwise it tastes like s---. I don’t like taking protein powders with additives because you don’t really know what that stuff is and it’s probably not good for your body.

I like to eat organic. The more organic, the better. My wife does the grocery shopping and she tries to buy organic, but we’re also price conscious so she won’t buy organic if something is ridiculously expensive.

I’ve trained with Johny lots of times. He helped me a lot with my wrestling and I helped him with his striking so we know each other pretty well. But that won’t be a factor in our fight.

When Johny and I sparred he was pretty raw. He was pretty much a wrestler who was learning jiu-jitsu. He had a good ground game. His boxing at the time wasn’t very technical but he still had heavy hands so you had to respect that. But I feel good about this fight with John and I’m confident that I will beat him.