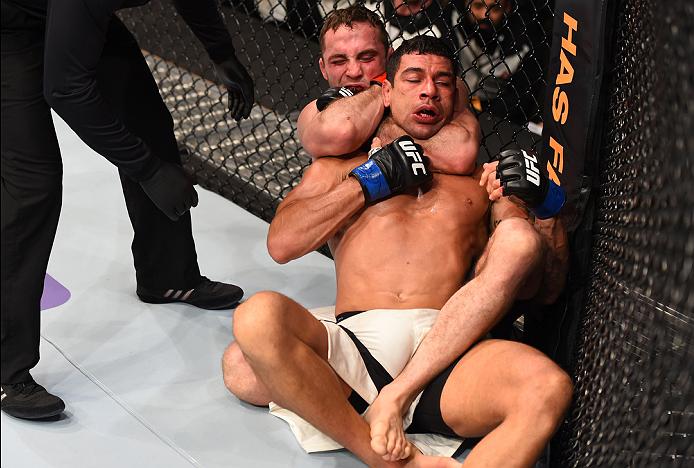 Fighters are not like the rest of us. UFC lightweight Tony Martin is a prime example.

Dating back to 2014, the Illinois native and Boston resident lived through a familiar pattern before fights. He would train hard for a month, and then when his fight was three to four weeks away, the pain would get bad enough that he had to sit out a week of training.

That rest always worked, allowing him to get back to work and get through his fight. He had mixed results, going from an 8-0 record on the regional circuit to a 2-3 slate in the Octagon. It could have been due to an uptick in competition, but it was likely something other than that.

And after his January 2016 win over Felipe Oliveiri, he took a July fight against Michel Prazeres and found out what that something was. In the midst of camp, like clockwork, he got that pain in the neck as the fight got closer. This time, the rest didn’t work.

“I took the week off, I was feeling great after the week, and literally the first training session, I roll on my neck just a little bit and it shut my whole body down,” Martin said. “I never felt anything like that and I knew something was seriously wrong.”

Martin went to the doctor and was told he needed to get into surgery immediately.

“I had a bulging disc on my C6-C7 that was protruding my spinal cord by over half way,” Martin said, with his doctor letting him know that he had seen people with less damage get paralyzed by such an injury. It was the wakeup call of wakeup calls.

“Any time you go through that, you think about more than just fighting,” he said. “There’s more than just fighting in the world, and I eventually want to have kids and I don’t want to be stuck, feeling I’m half-crippled. I was definitely thinking long-term and more than just my UFC career. So I definitely got worried until I went to the doctor. One of my managers had the same surgery, so I knew some people who had been through it, and he still trains, so that helped ease all that.”

With the surgery a success and Martin given the green light to resume his UFC career, you couldn’t find a happier young man anywhere, and when he returns to the Octagon on Jan. 15 to face Alex White, it’s a fight that almost feels like a new start for the 27-year-old, who has had a pain-free camp for the first time in a long time.

“It’s weird because I’ve been able to train through these last few weeks,” Martin said. “Every single camp, three weeks out we had to start taking everything away and I had to tone back everything. This time, we amped everything up three weeks out. This is going to be a whole new ballgame when I get in there and I’m going to feel that I can easily go three rounds at a hundred miles an hour.”

And despite being in a lightweight division many feel is the toughest in the sport, Martin is now confident enough that he won’t just be able to hang with the big dogs at 155 pounds, but that he can beat them.

“My confidence is at an all-time high right now,” he said. “I’ve never felt more confident in my physical and mental games in one. I always thought I had the physical tools, but then stuff would happen with the neck and you start having doubts. You take short notice fights and I’m cutting all this weight, but this time there’s nothing. There are no excuses. I can’t say anything negative about this camp. I had the best camp of my life, the best everything, so I’m at a point in my career now where I think we figured everything out. I figured out the game, now I’ve just gotta put everything together when I get in there. Physically and mentally, I think I’m more than prepared to not only beat Alex White, but beat anyone in the world right now.”

About the only negative about this whole situation is that he can’t tell his wife Kate that he can’t shovel snow this winter because his neck hurts. Martin laughs.

“My wife’s my biggest supporter,” he said. “I’ve been with her before I even thought of fighting, and she’s been through all the ups and downs with me. She knows how hard I work, and she works just as hard, if not harder than me at everything she does.”