Martin To Begin His Push In Wichita

Anthony Rocco Martin has faced plenty of trials and tribulations since making his UFC debut just over five years ago.

He picked up some impressive victories but also endured a few crushing defeats as he cobbled together a 4-4 record through his first eight fights inside the Octagon.

Following a heartbreaking split decision loss to Olivier Aubin-Mercier in a fight that he accepted on short notice, Martin knew it was time to make a serious change in his career if he was ever going to accomplish his lifelong dream to become a UFC champion.

The first move that Martin made was relocating to Florida, where he began training full-time at American Top Team.

The world-class facility has housed numerous UFC champions over the years, not to mention a training staff comprised of some of the best minds in striking, grappling and mixed martial arts. Martin had actually trained there earlier in his career, but as he looked for a fresh start, he felt that calling ATT his home on a full-time basis would be the best move for his career. 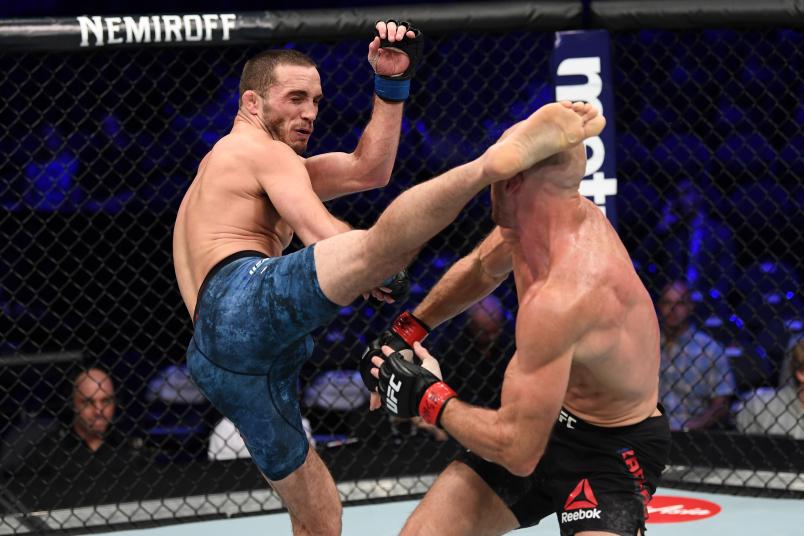 “It’s been huge,” Martin said about his move to Florida. “Mike Brown has been the lead trainer down here for me so I’ve been working with him every day. [Steve] Mocco helps out and then I work with Thiago Alves with some striking. It’s the best partners in the world.

If changing his training to American Top Team was the first piece of the puzzle in place, the second was going to involve Martin testing the waters in a new weight class.

HOW TO WATCH UFC WICHITA ON ESPN+

For the entirety of his UFC career, the 29-year old veteran had been cutting down to 155 pounds to fight in the lightweight division because that’s where he felt like he could compete the best.

What he failed to realize was that going through that rigorous weight cut was doing far more harm than good because just making the lightweight limit was almost harder than anything he was doing to prepare for his upcoming fights.

That’s when he decided to stop torturing himself and opted to see how life treated him at welterweight instead.

“The move up has been huge,” Martin explained. “It’s one less aspect you have to worry about. That was a full-time job. The one split decision I lost, I took on five weeks’ notice. I was 195 [pounds] five weeks out and that was the worst weight cut I ever had. After that, I said that’s it. I can’t be doing this to my body because then I can’t fight right away because I balloon up. At 170, I can fight two or three weeks after if I needed to.

“There’s so many stresses in this sport — your personal life, your training, getting prepared for a fight, there’s so much financial gain attached to winning — it’s just one less thing that you can just take off. I think it’s been a tremendous relief in my life. It’s one of those things where you’re not fighting two battles at once.”

Since moving to welterweight, Martin has looked virtually unstoppable.

He’s currently 3-0 in the division with a knockout and a submission added to his record during that time and now Martin is eyeing a move towards the top 15 rankings in 2019.

Ideally, Martin hoped to get a ranked opponent after his last win, but with Moraes holding an 8-1-1 record over his past 10 fights with his only loss coming to new welterweight champion Kamaru Usman, this is the perfect test to prove he deserves those fights going forward.

“In a perfect world, I want to be in the rankings. I want to be in contender fights. I want to be in fights where the number is by the name so I can start working my way up so you know you’re making that push up to get to the title,” Martin explained. “But Sergio Moraes, I didn’t really know him too much when I got the call but I looked him up and he’s got a really good UFC record.

“He’s strong and he’s wild and he just tries to brawl out there and if he gets the takedown, he’s world-class on the ground. I would have loved to get a ranked guy but this is a fight where he’s always been on the edge of being ranked, so I take him out I feel like I’m right there for the rankings.”

Throughout his UFC career, Martin has definitely shown flashes of brilliance, but inconsistency in many of his performances came back to haunt him.

Now with the right team behind him and the weight class where he feels most at home, Martin is confident that he will add another victory to his record this weekend and continue his climb towards title contention in the near future.

“I feel like my submission game is one of the best in the UFC. I may not be the best wrestler but I feel my submissions are top in the game. That’s a dangerous fight for any wrestler. I have so many slick submissions off the takedowns. That’s been a big aspect of my game. I feel I have a pretty great right hand as well. I think I’m going to give a lot of people trouble,” Martin stated.

“I feel like I’ve always had the ability. Now I have the mental game and less stress in my life and I think it’s just my time. I’m 29 years old now, I’ve been in the game eight years, now everything has come together. Mentally, physically, everything. I think it’s going to be a great showcase fight.”