Martin aware of mental game, knows he has to believe he's best

Tony Martin is like most athletes. When it’s time to compete, he believes he’s the baddest man on the planet. Yet as he points out, just thinking it isn’t enough.

“To be an elite athlete in any sport, you gotta believe that you’re better, you’ve got to believe that you’ve put in the harder work and that you want it more and that you’re willing to give more to be the better athlete,” said Martin, who faces Johnny Case this Sunday in Oklahoma City. “I have to go into every fight with that mentality. But to help with that, you’ve got to put the work in because you can’t lie to yourself and tell yourself stories. When you’re in the room by yourself, you know what you did and how hard you trained.”

It’s why Martin drives all around his adopted home region of New England to get the proper training in. From Boston to New Hampshire, the 27-year-old is piling up the miles, and while he’s keeping his career as a pro fighter going, that’s a price he’s willing to pay.

“Mostly when I go places, all I do is train,” he said. “Everything I do is based around my training, and they have good training around here. I have to drive around a little bit, but it’s one of those things where my job is to fight and become the best fighter I can be, and in order to do that, I have to train every day. I don’t do a lot of the normal activities that other people do.”
RELATED CONTENT: Best fights to look out for | OKC Fantasy Preview | Chiesa vs Lee: Fight Before the Fight

Like eat? He laughs, making it abundantly clear that following Sunday’s bout, food establishments everywhere should be on the lookout for the rampaging lightweight, who may be closing in on middleweight by the end of next week. But in the meantime, he might be a little cranky.

“Most of the time when I’m in camp, I’m not able to eat the normal foods that I like, so I’m the party pooper for sure,” he laughs.

Yet as he will say without hesitation, that’s part of the gig at this level of the sport. And while he may not want to say this too loud around his peers, his competitive nature has him embracing every part of the game – even the weight cut. 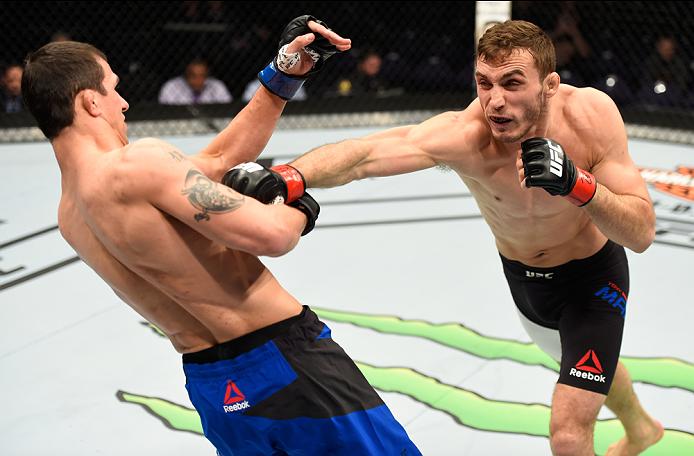 “I strive to be the best and to do that, you have to make certain sacrifices,” he said. “The weight cut is part of the fight. And it’s a very big mental part of the game, so I kind of enjoy it a little bit. Obviously, I’m not the most enjoyable person to be around all the time, but it makes you feel like you’re in a fight at all times. It’s a mental game and I enjoy competition, no matter what it is. You name it, I’m trying to win, no matter who you are.”

And after a slow 1-3 start to his UFC career, Martin has won two straight over Felipe Olivieri and Alex White that have momentum on his side heading into Sunday’s matchup with a fellow prospect he doesn’t care too much for in Case.

“We grew up on the same circuits a little bit,” Martin said. “He’s from Iowa, I’m from Minnesota and we have some history. I’ve been trying to fight him since the regional scene, and him and his management have not wanted this fight.”

Moving on to the UFC, Martin continued to pursue a fight with Case to no avail. Some social media back and forth followed, and eventually, Martin got the bout.

“He said some things that rubbed me wrong, he’s kind of disrespectful and I just don’t like that about him.”

On fight night, though, Martin will not let emotion get in the way of the primary task: to win. Again, it goes back to the mental game that Martin tries to hone as much as he does his physical one.

“If I had to put a ratio on it, I’d say it’s 75-25 for the mental game,” he said. “It is so important because you’re not always physically healthy, so the mental game is what’s going to counteract all those thought processes. Then you have those doubts creep in, and there’s the reality of being in certain situations, so the experience is also a huge part that plays into it as well. The mind is the biggest tool that you need in martial arts and that’s one thing I think a lot of people don’t truly understand.”

But Tony Martin gets it.