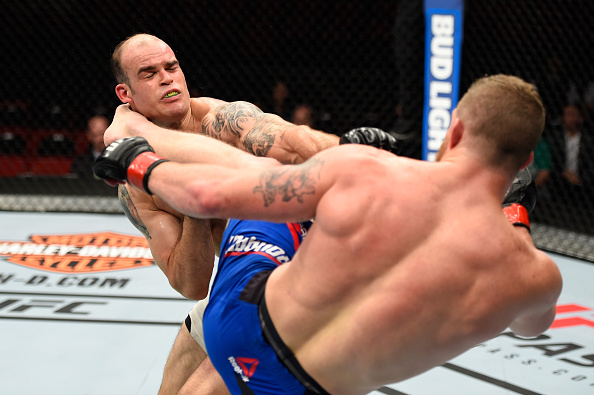 Middleweight veteran Nate Marquardt is not done yet. That was made evident in the Coloradan’s 56th pro fight Saturday night at Portland’s Moda Center, as he knocked out Tamdan McCrory in UFC Fight Night action.

The fighters primarily traded kicks in the opening two minutes before Marquardt shot in and got a takedown. McCrory looked for submissions off his back, but Marquardt’s defense was airtight.

McCrory began to land more shots in round two, but when “The Barn Cat” got too aggressive, Marquardt took his foe back to the mat, showing off his veteran experience. Marquardt kept McCrory grounded until referee John McCarthy restarted the action, and that proved to be all Marquardt needed, as a right hand hurt McCrory and a left kick to the head finished him, with McCarthy calling off the fight at 4:44 of the second frame.

Ion Cutelaba picked up his first UFC victory in impressive style, putting on an action-packed performance in shutting out fellow light heavyweight up and comer Jonathan Wilson over three rounds.

Cutelaba immediately started the fight throwing bombs, briefly jarring Wilson with a right hand. Wilson shook off the effects of the blow and briefly clinched. After breaking, Cutelaba kept throwing heat, but Wilson countered well with his left hand, and at the end of the round, it was Wilson landing the more telling blows.

A low kick by Cutelaba brought the action to a halt in the opening moments of round two, forcing Wilson to take the full allotted five minutes to recover. When the action resumed, Wilson had his moments, but Cutelaba quickly took over, as he kept his offensive work rate high.  Wilson wasn’t out of the fight though, as he bloodied Cutelaba and had him on the defensive late.

It was Wilson playing aggressor in the third round, but Cutelaba got his offense back into gear soon enough, and by the midway point, he was winging punches and stalking the Californian once more, thrilling the crowd and guaranteeing that he would get the nod on the scorecards.

Moldova’s Cutelaba moves to 12-2 with 1 NC with the win; San Bernardino’s Wilson falls to 7-2. 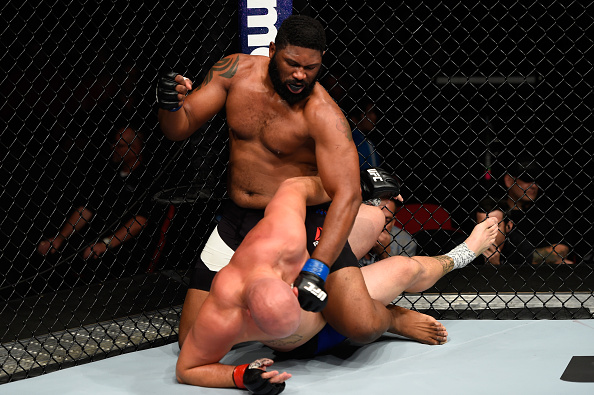 In a meeting of heavyweight prospects, Curtis Blaydes emerged victorious in his bout against Cody East, stopping East via strikes in the second round.

Blaydes got East on the deck twice in the opening two minutes. The first didn’t hold, but the second allowed Blaydes to feed East a steady diet of ground strikes as he kept his foe against the fence. East eventually fought free and rocked Blaydes on the feet, but another quick takedown bought Blaydes time until the two rose and traded takedowns, “Razor” eventually keeping his opponent on his back until referee Dave Hagen restarted the bout with 30 seconds left. That’s all East needed to land more bombs before he delivered his own takedown just before the horn.

Clearly winded as round two began, East got hit with some hard shots before Blaydes took him down in the opening minute of the frame. This time, Blaydes didn’t let him back up, with a series of unanswered elbows prompting Hagen to step in at the 2:02 mark.

After battling on fairly even terms early on, Vieira tripped Faszholz to the mat and kept her there for the rest of the opening frame. The Manaus native opted for a similar strategy to kick off round two, but after the action stalled, referee Dan Miragliotta restarted the action with 1:42 remaining. Faszholz tried to implement her kicking game, but Vieira caught one and put the bout on the canvas again. It was only a brief visit though, as Miragliotta restarted the fight quickly.

Told that she needed to finish in round three, Faszholz went on the attack to start the final round, tagging Vieira with hard punches upstairs as she marched forward. Two clinches stalled her momentum, but when at range, the Californian was able to dominate. With under two minutes though, a Vieira slam ended Faszholz’ run, as the Brazilian was able to keep her foe grounded until the final horn.