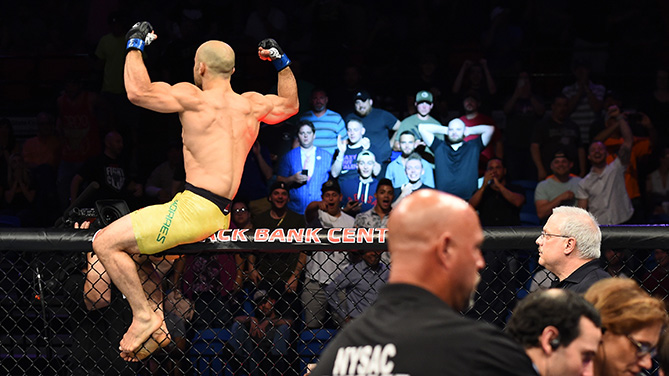 “In the next few years Marlon Moraes is gonna mean what Anderson Silva and what Vitor Belfort meant to Brazil. Thanks to all his hard work and effort, he will become a reference to Brazlian mixed martial arts.

Moraes’ jiu-jitsu coach, Ricardo Almeida, has high expectations for the 21-5-1 fighter. Almeida views the Brazilian bantamweight as one of the top fighters in a talent-rich division.

Almeida isn’t the only person who sees this type of potential in Moraes. Nearly all of those who work with the 30-year-old on a daily basis at RA BJJ/ Iron Army in New Jersey, see Moraes as a top contender. Moraes joined Iron Army in 2012 after being invited by fellow Brazilian stand-out Edson Barboza.

Barboza and Moraes are childhood friends who have been training Muay Thai together for almost 20 years. So when Edson was called by coaches Almeida and Mark Henry to be a part of Frankie Edgar’s camp for his UFC lightweight title rematch against Benson Henderson at UFC 150, he brought his training partner along with him, and his success was immediate.

“The nice thing about Marlon is that the only thing I did was introduce him, I never needed to advertise for him because I knew that when he arrived there, he was gonna speak for himself,” says Barboza. “When I came to the United States, that’s what happened. The kid has his own shine.”

“I was blown away”, added boxing coach Mark Henry, “He sparred with Frankie (Edgar) and a couple days later I took him to Philadelphia, which is a great place for boxing sparring, just to see how he would do. I put him against a few pro boxers and he did amazing.”

By that time, Moraes had a professional MMA record of 7-4-1, something that drew interest from new instructors witnessing his increased potential.

“Marlon was coming off a loss and even considering retirement,” said Almeida. “Me and Mark were very impressed by him. We said, ‘This kid is an amazing talent, why doesn’t anybody give him some credit and put faith in him’?’”

“One of his last teams even said that maybe he should just hold pads for a living,” added Henry. “I thought ‘Someone is doing something wrong with him.’ He definitely had championship potential. He was the first guy I ever saw that I thought should have been in the UFC right away. I usually think people need more time, but he was ready since day one”.

But his arrival in the UFC would take five more years, a period in which the Brazilian competed in the World Series of Fighting, winning all of his 11 fights - seven of them by KO/TKO or submission. Moraes would go on to capture the bantamweight title and defend it five times.

During his time with the World Series of Fighting, Moraes strengthened his ties with former UFC lightweight champion and former UFC featherweight title-challenger Frankie Edgar. Moraes believes that Edgar’s tutelage has directly contributed to his development into a force at the top of the UFC’s bantamweight division.

“If I had to name one main training partner I have had for the last six years, that would be Marlon.” says Edgar. “I train with him every day, so I know his skills. He’s a complete fighter. Everyone sees him as a striker for his last two knockouts, but he is a well-rounded mixed martial artist. He’s a great wrestler, he’s great in jiu-jitsu, he’s good at everything.”

“Now he’s very tight with Frankie, they do all the workouts together and they’re very close,” added Henry. “To learn from someone who has good habits like Frankie, who knows how much to train, how to train, that makes a big difference”.

In his first trip inside the Octagon the Brazilian saw his undefeated streak come to a halt, losing a close fight against Raphael Assuncao, who was awarded the a split decision win at UFC 212.

What came next for Moraes was a powerful resurgence and three consecutive wins against top competition in the 135-pound division. A decision against John Dodson and massive knockouts over Aljamain Sterling and Jimmie Rivera have propelled Moraes straight to the title-shot conversation.

“We knew from the start he was one of the best of the world, he just needed to get to the UFC to prove it,” said another team member, the sixth-ranked light heavyweight in the world: Corey Anderson. “Now that he got there, he’s doing just that.”

In the eyes of his teammates, there is no doubt that Moraes can become the next great Brazilian star in MMA.

“I think he already is,” said Edgar. “I have known for a long time what the rest of the world is about to find out very soon.”

“Marlon is not a prospect anymore, he is reality. He is one of the biggest names in Brazilian MMA today,” added Barboza. “His nickname speaks for itself: he is ‘Magic’, and it has always been that way.”