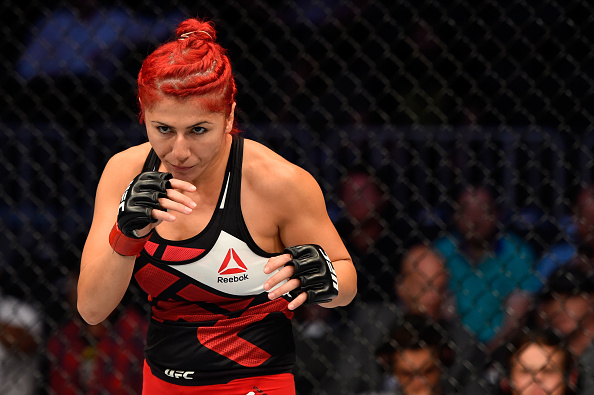 The vision is clear. Randa Markos, bundled up for the Canadian winter, running through the snow like Rocky Balboa preparing for Ivan Drago.

Well, not quite, but the Ontario strawweight admits that it isn’t the same old training camp for her Sunday bout against Carla Esparza.

The boxing gym is just one stop during the many daily travels for the 31-year-old. These days, there’s no single place where Markos perfects her trade and prepares for the most pivotal match of her UFC career. She’s become a nomad of sorts, going wherever she needs to go to get the best work in each particular MMA discipline.

“I felt like I didn’t get what I needed from MMA gyms,” she said. “I’m sure in the future I’ll be looking for something a little different but, right now, I really needed to work on my wrestling and I really needed to get back to the basics. So I went back to my old wrestling club and worked there, I went to a boxing gym and worked on my basic boxing, and then did my conditioning at a separate gym, and jiu-jitsu with my jiu-jitsu coaches. I wanted to break everything down, start from the bottom and work my way up.”

“It’s been a crazy ride, a lot of finding myself and realizing what I need to do. I needed to take the steps that I did to figure it out, and hopefully, I’ve figured it out." --Randa Markos

Entering her third year on the UFC roster, Markos isn’t in a position where she has to reinvent herself, but with a 2-3 Octagon slate, there is a need to find consistency so fans will see her talent every time she makes that walk. Hence, the decision to go back to her roots and figure it all out on her own.

Thank you to everyone from Windsor Vortex wrestling club and Tecumseh Vista for all your help. Lots of amazing people in this pic that have been there from the first day I started martial arts. Love you all #ufchalifax
A post shared by Randa "Quiet Storm" Markos (@randamarkos) on Feb 13, 2017 at 7:41pm PST

“What I was really looking for was a main coach, somebody to guide me through everything, and it’s really hard to find that,” she said. “I found that when I went to the big gyms, there are so many fighters and so many talented people that you kind of get brushed aside. So I took it in my own hands and rearranged my training to what I think is best for me. That’s really where it all began.”

Out of action since an August loss to Cortney Casey, Markos is confident in her return against a former world champion, one she had plenty of bad blood with when the two were on season 20 of The Ultimate Fighter. And you can throw in that when fighting in Canada, the “Quiet Storm” is unbeaten in five fights.

“That’s one of the reasons why I’m glad this fight is in Canada, and I’ll hopefully continue on that winning streak,” she said.

That’s just one of the positive motivators she has on her side, and beating Esparza would be the perfect way to put to rest the rollercoaster ride of the last two years and get back to the business of chasing a world title. So how would she describe her stay in the Octagon thus far?

“Not what I want,” Markos said. “It’s been a crazy ride, a lot of finding myself and realizing what I need to do. I needed to take the steps that I did to figure it out, and hopefully, I’ve figured it out. But I’m going to continue learning and growing as I keep going. It’s been a challenging couple of years, but I’m not satisfied, so I’ll continue and hopefully I’ll end up satisfied eventually.”

In the meantime, she’ll continue to do what she needs to in order to prepare for bouts and then deliver on fight night. It’s not a glamorous process, but it’s one Markos is willing to go through.

“I have the potential, I just haven’t been able to show it,” she said. “I know I have it. Every time I look in the mirror, it’s like, ‘I know you have it, you can’t quit now. You’ve got to keep going.’”

“I’m looking to show off that potential, break down everything and continue to grow and improve,” Markos said. “I really want to impress people and impress myself and go out there this year and turn some heads. I think this is a great start by fighting a former champ, and if I can do this, I think people should never underestimate me.”