Mark Striegl's journey to his UFC debut has been a rollercoaster, but now that he's here, he's ready to make a splash.
By Gavin Porter, On Twitter @PorterUFCNews • Oct. 16, 2020

Mark Striegl’s journey to the UFC has been a rollercoaster.

In August, he traveled from his home in Baguio City, Philippines to Las Vegas to make his long-awaited UFC debut. Little did he know that he would have to continue waiting for that moment, as he was diagnosed with COVID-19 during fight week and his bout was cancelled.

It wasn’t an easy moment for Striegl (18-2, 1 NC) but the 32-year-old Filipino wasn’t deterred from his dreams one bit.

“It’s a rollercoaster, I mean MMA is a rollercoaster in general, especially during these COVID times,” Striegl told UFC.com. “Coming from Baguio City to Manila to Las Vegas, getting COVID when I thought that was the last thing that would happen, then getting rescheduled and rebooked onto Fight Island and then finally being here, it’s been an absolute adventure but all part of the journey and I’m just super excited about it.”

One of the things that excites Striegl the most about his opportunity to face Said Nurmagomedov on the UFC Fight Night: Ortega vs The Korean Zombie card this weekend is the chance to put on for his country.

Striegl plans to bring honor to the Filipino flag by bringing the type of fight that gets fans off their couches. And in order to deliver the performance that he envisions on Saturday, he’ll need to avoid any UFC debut nerves.

“It’s, for sure, overall excitement and anticipation - a whole jumble of all sorts of emotions for sure,” Striegl said when thinking about the emotions he’ll experience on fight night. “But it’s all about keeping it under control and keeping the breathing under control, going out there and taking care of business.”

MORE: Fighters On The Rise | Jimmy Crute Is Back

So far in his career, Striegl’s favorite way to take care of business has come on the canvas, with 14 of his 18 victories coming by submission. With wins by guillotine, keylock, rear naked choke, scarf hold armlock, armbar and triangle choke, it’s clear that Striegl is as dangerous as they come once the fight hits the floor. 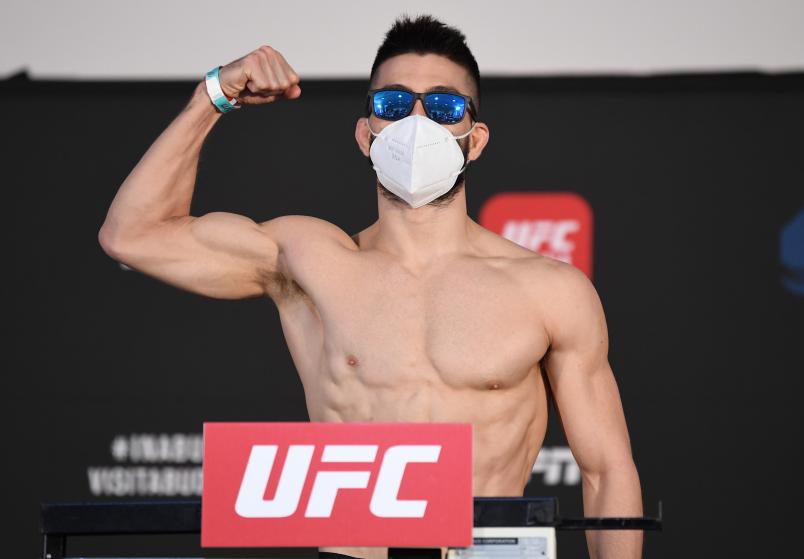 Due to his ground game, he isn’t sure what to expect from Nurmagomedov in the Flash Forum arena this weekend. Regardless of his opponent’s game plan, Striegl plans on bringing fireworks to their bout.

“I think we are both explosive fighters and I just feel that I match up very well against him. It’s just going to make for an action-packed fight,” Striegl said. “I’m an action-packed fighter. I’m never in a boring fight so the fans can expect a high pace, a lot of aggression and me getting my hand raised. That’s it.”

Make sure you catch Striegl’s Octagon debut in the first fight of UFC Fight Island 6 live on ESPN+ at 4pm ET / 1pm PT.