Mark Munoz: Out of the Darkness and Into the Octagon

"Right now, I’m feeling super-excited about this fight. I feel like I’m prepared, and I’ll be in there able to give my best." - Mark Munoz 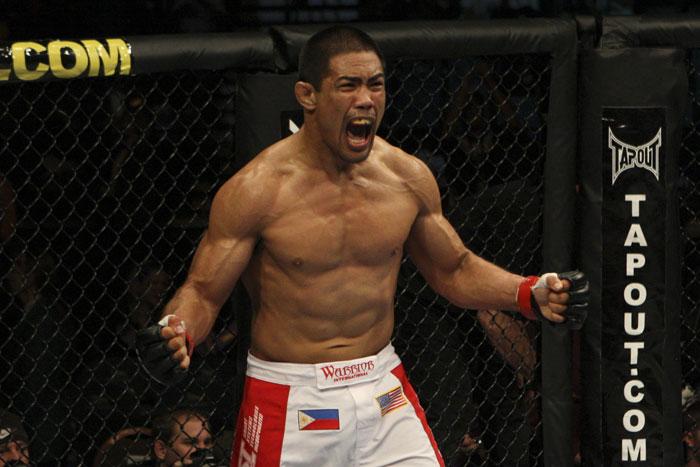 “I’m in the best shape of my career. I’ve never felt this good before.”

We’ve heard it a thousand times from a thousand fighters. Some break out one of the sport’s chief clichés every other fight. It’s gotten to the point that we just accept it to be a half-truth.

After all, what fighter is going to tell the reporters hovered around them at a media event or the guy on the other end of the phone asking questions that training camp hasn’t gone as well as it could; that they’re a little heavier than they’d like to be heading into fight week, and that ideally, they’d have two or three additional weeks to prepare?

Rather than just say the words, Mark Munoz showed everyone that he is, in fact, in the best shape of his career.

Seven days before he was set to step into the Octagon with fellow middleweight contender Tim Boetsch at UC 162, “The Filipino Wrecking Machine” took to social media, posting personal “Before and After” pictures, or as he called it, “From Obese to A Beast.”

On the left, 260-pounds of frustration and disappointment – a fighter forced to the sidelines by injuries that ate his way towards the heavyweight limit to combat the dark feelings inside him.

On the right, a smiling, chiseled specimen – an athlete one week away from returning to competition, and someone with a brand new approach to pursuing his dream of becoming a world champion.

Nothing about 2012 went as planned.

In January, Munoz was forced to withdraw from a #1 contender bout with Chael Sonnen that would serve as the co-main event on the first full UFC on FOX show due to an elbow injury.

“Then I got offered Chris Weidman,” recalls Munoz, laying out the series of events that led the former Division I National Champion wrestler to his lowest point. “They gave me that fight, and I was kind of wavering between should I fight or should I not fight. I ended up fighting, but I was taking a fight too soon. I rushed back into it still having a bum elbow, and in the process, I actually felt a couple pops in my foot.

“I lost that fight – Weidman threw that elbow – and after that fight, I went to the doctor, and the doctor said I had a broken foot. That was the straw that broke the camel’s back right there because if it wasn’t one thing, it was another, and I just couldn’t get a break.

“Losing that fight was hard for me. I’m the kind of guy that wears his heart on his sleeve, and I take losses hard. I know that they’re all part of it, so I knew I had to rebound, but it was really hard because one thing kept happening right after another. When the news came that I broke my foot, and then he said, `You’re probably going to be out for a year,” I was just like, `Oh my gosh, man. You’re kidding me?’”

The news sent Munoz into a tailspin.

He sought comfort in food. A trip back to the Philippines brought about a large family gathering, and large Filipino family gatherings mean copious amounts of food. Roasted pig, lumpia, and adobo followed plates of kare-kare and dinuguan, and when he returned to Lake Forest, California, he didn’t stop eating.

“I went through depression; I really did,” explains Munoz, who has amassed a 7-3 record over his first 10 UFC appearances, and carries an overall 12-3 mark into his meeting with Boetsch on Saturday. “I never thought I would ever be someone that goes through depression, but it happened. I don’t ever take back what happened in my life because I know there are lessons to be learned in life’s adversity. In retrospect, I’m actually glad this happened to me.

“I’ve got a wife and four kids, and I feel like I missed a lot of events in my kids’ lives, I wasn’t as thoughtful to my wife, and now that has given me a different perspective about family. I had so much in my mind about getting that golden belt around my waist, but I have precious jewels at home.

“I’ve read this thing that said, `You cannot prioritize your schedule; but rather, schedule your priorities.’ That’s something that rang true in my heart,” he continues. “Now I’m not trying to control everything as part of my schedule; I’m trying to schedule my priorities. My family comes first, and I’ll put my training in between. I’ll always get my training in, but for me, my family is most important – that’s my lifeline – and I know that all that has to be in harmony before I feel like I’m training good and feeling good.”

It’s obvious from the stunning transformation on display in his “Before and After” photos that things in Munoz’ life are now harmonious.

While his time away was a forced hiatus as opposed to a scheduled sabbatical from fighting, it was something Munoz needed, but probably never would have opted to do himself.

Since winning his debut fight in July 2007, the longest the now 35-year-old middleweight had gone without competing was an eight-month stretch between his final win on the California regional circuit and his successful debut under the WEC banner.

His first nine fights in the UFC appearances came in the span of 31 months, a clip that exceeds the torrid pace light heavyweight champion Jon Jones kept during his climb up the rankings to the top of the 205-pound weight class, and one that came while Munoz was still making the transition from standout collegiate wrestler to mixed martial artist.

Stepping into the cage every three or four months leaves little time to let the nagging injuries that accumulate and persist from fight-to-fight and training camp-to-training camp properly heal. Instead, they fester, limiting what you’re able to do in the gym and in the fight.

“Going through this whole experience that I went through last year, I feel that I’ve matured big time,” says Munoz. “I’m not going to adopt that wrestling mentality of `tape it up and go’ anymore. I have to heal my body, make sure it’s right, and make sure I get the rest and recovery I need in order to come back stronger.

“I’m at my prime right now,” he continues. “I feel like I’m just getting into where I’m being more well-rounded and more the fighter I want to be. I’ve matured a lot in this sport. Being 35, I feel great, and I feel like I’m in my 20s. I just needed that time to get my body back because I was on the grind for a long time. I was fighting consistently, ignoring the little injuries that I had, and fighting through it.

“I’ve been knocking on the door of #1 contender and potentially fighting for a title, and now I have to do it again, just in a different way.”

Despite being out of action for nearly a year, Munoz has the potential to get right back into the thick of the title chase with a win over Boetsch on Saturday. In the time he’s been out, the divisional landscape has both shifted and stayed the same, with new contenders emerging and overtaking him in the rankings, only to be rebuffed and sent back down the ladder to try again.

All the while, Munoz was keeping tabs on things, and while a date with “The Barbarian” wasn’t exactly what he expected, squaring off with the 32-year-old AMC Pankration representative is a perfect fit as far as the former Oklahoma State Cowboy Munoz is concerned.

“I was keeping close track of our division, seeing what was happening, and there is definitely a lot of parity there. There are some fighters that were in the top five that fell off, and some that were in the top 10 that were coming up, but then they ended up losing too, so there is a lot of parity. I just knew that I was still in the mix. I was ranked as high up as #5, and then down to #8, and then back up to #6 because there were guys that were losing.

“I knew that I was going to have a good fight coming back, and I was preparing for that. I’m a UFC vet – I’ve been in the UFC for quite some time now – and I didn’t want to get some newcomer, and have to build up from there. I was thinking it was going to be someone like Lombard or somebody of that stature, but I’m happy with the matchup. We’re both coming off a loss, and we’re both looking for that win that will get us back in the title hunt.”

The excitement in his voice picks up as he talks about his impending return to the cage, and facing off with Boetsch. It has been a long, challenging year, but the payoff is within sight.

“A setback is a set-up for a comeback,” he says, dropping what has become one of his signature phrases on the road back to the Octagon. “This fight is going to be nothing short of fireworks. Every time I fight, I look to finish – everyone knows that – and at the same time, you’re going to see a new and improved version of myself. You’re going to see it technically, and even physically.

He’s not just saying that either. He’s got the pictures to prove it.