Mark Munoz: More than a Fighter 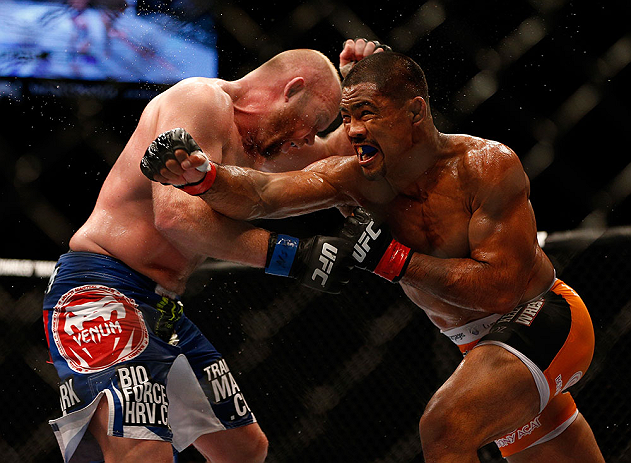 Those who were around Mark Munoz saw the warning signs for a while. Finally, the situation had reached its breaking point. There was going to an intervention at the Reign Training Center in Lake Forest, California.

“My management, my training partners, my coaches, they all came up to me and they ran an intervention, like I was a drug addict or an alcoholic,” Munoz chuckles. “They were like ‘hey, you need to be more selfish.’”

It was an intervention like no other, but it made perfect sense if you know Mark Munoz. The pound-for-pound nicest person in mixed martial arts, Munoz was always there for everyone, but when it came time for him to get ready for his fights, he was still putting everyone else above himself. This wasn’t lost on his teammates and friends, and they let him know that it was all right if he focused on himself sometimes. Better yet, when he did, they would be there for him.

“There were so many guys telling me that ‘we understand when you can’t coach us; we understand that. You gotta take care of business, so don’t feel like you have to do all these things.’ Then my manager said ‘insanity is doing the same thing over and over again and expecting a different result.’”

It was like this for six years, but now, Munoz is starting to let go.

“It’s a hard thing for me to do,” he said. “I’m an old dog, but I’m being taught new tricks. It’s humbling, but at the same time it’s better for me because I’m not having to spin all these plates and keep them spinning.”

Returning to action this Saturday for the first time since a May loss to Gegard Mousasi in which he tore his MCL and PCL and strained his ACL before being submitted late in the first round, Munoz has had plenty of time to realize that at 37, he can’t train like he did when he was tearing up the wrestling mats at Oklahoma State. It’s just not physically possible without reminders – in the form of injuries – that you’re not a kid anymore.

“For the better part of almost six years, I’ve been training like a madman,” he said. “I feel that nobody trains harder than me, but then that’s not the smartest thing to do. I’m getting older and I’m still training as if I was 20 years old. And I’m not taking any time off between doing these anti-bullying campaigns, running my gym, and I have a wife and four kids. My plate was so full and I kept stacking things on top of it. And then training at the same time and at the same intensity every time, training five, six hours a day. My body was giving out on me. So I didn’t have the year I wanted to last year because I had so much going on.”

He promises this year will be different, starting with his UFC 184 bout against Roan Carneiro. It’s a chance to get back in the win column after back-to-back defeats to Mousasi and Lyoto Machida, as well as fight in his Southern California backyard. As far as training, the new regimen is coming along.

“When I go hard I go hard, when I go light, I need to go light,” he said. “I’ve got to stay on it because I have to take care of my body and I have to be smart in training. It’s been a process for me, but I’m very excited. I’m very excited to fight in LA, in my home area. And then when the Philippines got announced, I was even more excited. That’s more added motivation. I’m training very hard and making sure I cross all my Ts and dot all my Is so that I’m ready, prepared and healthy when I go in there.”

“The Filipino Wrecking Machine” has already made it clear that no matter what, he wants in on the UFC’s first visit to Manila in May, and despite trying to be objective, you have to cross your fingers that he’ll get his shot to fight on that card. It’s only fair after everything he’s done for those around him and the sport that a little good karma comes back to him. But then again, you’ll never hear Mark Munoz ask for anything like that. It’s just not in his nature, and it’s why when it’s all said and done on his athletic career, his impact outside of the Octagon will still be felt.

I asked him if he was cool with that being his legacy, and he told me a story about his son wanting to drop soccer and baseball, two sports he was having a lot of success in, for wrestling.

“I started breaking down,” Munoz said. “I just want him to love whatever he does. I could care less if he was a champion. But the lessons he will learn through the process, that’s what I care about it. Wrestling, like MMA, teaches you about yourself. I think these two sports mirror life so much.”

He returned to the question, though you knew the answer already.

“Am I content with having success outside the Octagon? Absolutely. I feel that I leave my legacy with everyone I come in contact with. For me, that’s what it’s all about.”