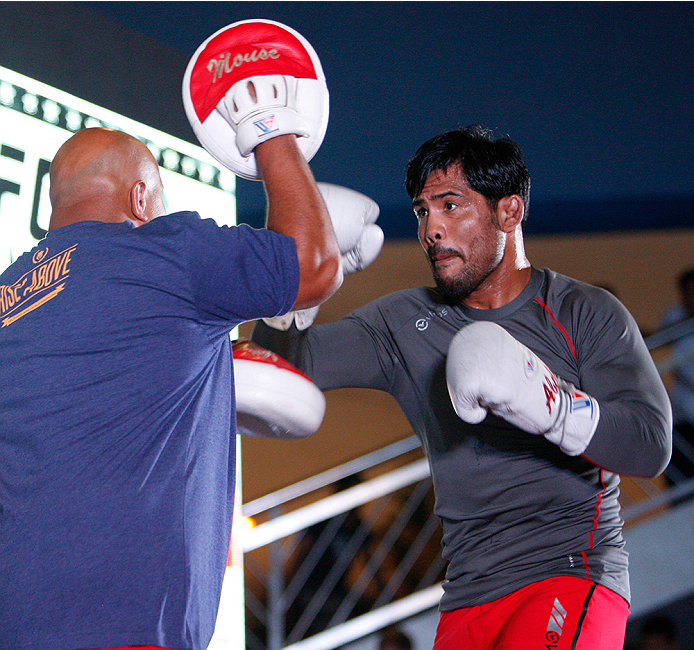 It’s fitting that for his last mixed martial arts fight, Mark Munoz will be on a card headlined by the man who dragged him into the sport back in 2007, Urijah Faber.

“He convinced me, because I wasn’t going to do it,” Munoz remembers. “But these were some of the best years of my life and I thank him for it.”

A former NCAA National champion in wrestling for Oklahoma State University, Munoz was coaching in the days after his mat career was over, but the competitive fire was still there. Enter Faber, and after some persuading, Munoz began to pursue professional fighting, turning pro in July of 2007 at the age of 29. It was a late start, but Munoz did a lot with the time he had, and now, nearly eight years after that debut, he prepares to retire, but not before one more fight, in the Philippines this Saturday against Luke Barnatt.

And though the past weeks have been filled with tributes and talk about life after fighting for the 37-year-old, the fact remains that until the final horn sounds for him in Manila, he’s still got a young, hungry prospect looking to punch him in the face this weekend. So for “The Filipino Wrecking Machine,” his final training camp isn’t about reminiscing; it’s designed to keep everything as normal as possible.

“What’s going through my mind is having a great fight,” he said. “My thought process hasn’t changed. I want to have a great showing in the Philippines, and I’ve got all my ducks in a row. My last few fights, I’ve either been injured or fighting my weight, so right now, everything is good for me and I’m looking forward to this fight.”

As for that getting punched in the face thing?

“I feel that with my experience being inside the Octagon and having training camps back-to-back that I’m prepared and I’m ready and Luke’s welcome to try and punch me in the face,” Munoz laughs. “But I’m gonna welcome him back with five or six more. I’m excited for this one and you might think ‘oh, Mark’s not mentally prepared for this because of his last fight,’ but he’ll see. When he’s locked inside the Octagon with me, he’s gonna feel like ‘oh man, I’m in trouble.’”

It’s the kind of thing you want to hear from Munoz, not just because you don’t want to see him get hurt for being unprepared, but because in any sport, when an athlete talks of retiring, he might as well go there before competing one more time with his heart not in it. This isn’t the case with Munoz, who is competitive as ever, something he admits he will carry with him into retirement.

“I’m a competitive person,” he said. “I compete against my wife all the time. If there’s a spot on the couch I want, I’m gonna get it. (Laughs) And she competes against me as well, so it’s a great relationship.”

That relationship with Kristi, as well as with their four children, will get even more attention in the coming days, weeks, months and years, as being around his family was a key catalyst for Munoz to decide to hang up the gloves. That’s a gutsy – and admirable – move for someone who probably still has enough gas in the tank to give his fellow middleweights a tough go on fight night.

Of course, that doesn’t hide the results of his last five fights dating back to 2012, as he’s gone 1-4 with all four losses coming by knockout or submission. That run puts his current record at 13-6, but whether he leaves active duty at 14-6 or 13-7, Munoz – who owns wins over the likes of Chris Leben, Demian Maia, Tim Boetsch, and CB Dollaway, just to name a few – will never see his career judged by wins or losses.

That’s rare, but Munoz is one of the rarest individuals you will meet, not just in sports, but in life. It’s been written so much that it’s almost become a cliché, but if you’ve ever been in the same room with Munoz, you will leave it feeling better than you did when you entered it. I tell him this and you can tell immediately that it means more to him than wins and losses.

“That’s what I’ve always tried to do and that was my goal,” he said. “Every time I come into contact with somebody, I want to leave a lasting impact on them. That’s just who I am. I’m a giver, I love giving, and in giving I received a lot from a lot of people. So it’s awesome to get that reception from people when they talk about me. Reputation is a great thing to have, especially if you work hard at keeping it. But the thing that I like the most are the relationships I’ve made through treating people the way I want to be treated. I really try to live by the Golden Rule and that’s how my parents brought me up, and being a man of faith, that’s how I want to be. I try to be a light to people where there’s darkness. When they’re sad, I try to lift them up and try to inspire and motivate them because I know that’s how I’d wanted to be treated if I was down.”

Munoz admits that when the gloves come off for the final time, he’ll miss the sport. That’s natural, but he’s not riding off into the sunset never to return.

“I’m going to miss it so much, but at the same time I’m still going to be around it, and you’ll see me around.”

He’s also not done with competition, though this time he plans on leading athletes, including his son, as a coach. To that end, he’s shut the doors of his Reign MMA facility but it’s not the final word on the team he built.

“This is not the end of Reign, the entity,” he said. “I’m keeping my wrestling program and I’m going to coach.”

Munoz is going to be a good one, not just because of the technical things he can teach his athletes. The Californian has a wealth of knowledge to share about life, with maybe the most important lesson when it comes to the fight game being to leave on your own terms. That’s the toughest thing to do in combat sports, a place where most are forced out, but not Munoz, who realized that while there were no world titles on his resume, a gold belt doesn’t always mean someone is a champion.

“I always wanted to stand out, somehow, some way and if it was being a champ, that’s great, but I wanted to be a champion off the mat more than I wanted to be on the mat or inside the Octagon,” he said. “To me, this is about passing on the knowledge you’ve accumulated throughout the years and helping people out.

“Obviously there are chapters in one’s life and I’m starting a new chapter in mine,” he said. “I’m excited to go forward, but my past chapters have led me up to this one. I want to be a dad, I want to be a coach, I want to be someone that leaves a lasting impact on those I come into contact with, and that’s what my career has led me to, and it’s kind of full circle. I was a coach before I got into MMA, and now I feel that I’m an even better coach because of all the experiences and life choices I ended up making throughout my career. So I’m very excited for this, but business is business. I’ve got Luke Barnatt in my future and I’m looking to put a stamp on my career in a positive way and everything is going as planned.”

But if he runs into Faber this week, does he thank him or curse him?

“I thank him,” Munoz said. “We were on the press tour in the Philippines and it was awesome to be around Urijah. He’s a brother from another mother for sure. He’s somebody that I look up to even though he’s shorter than me, and he’s somebody that’s been there for me, and I’m always going to remember that.”

And we’ll all remember Mark Munoz.