"I want to make the most of the opportunities I have right now and I can’t do that by focusing on the past." - Mark Munoz 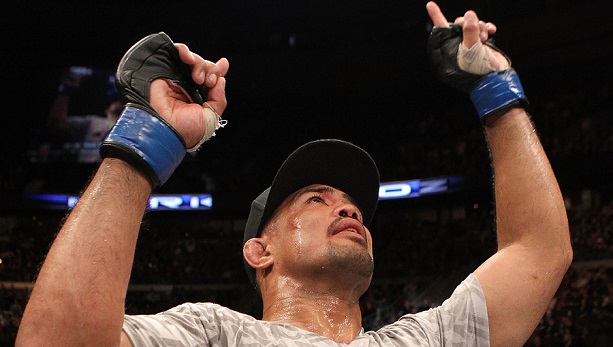 A setback is just a setup for a comeback.

While athletes draw motivation from a myriad of places, this particular mantra is one that has been burning in Mark Munoz’s brain for quite some time. It was December of 2012, sitting at a restaurant in Seattle, Wash., when those words first hit my audio recorder. In that moment, the former NCAA Div. I national champion wrestler turned surging contender in the UFC’s middleweight division was facing a set of circumstances far different from anything he’d ever faced.

Throughout his athletic career, Munoz had always been a winner. The Team Reign leader had parlayed a stellar stretch on the wrestling mats of Oklahoma State University into a successful run in the sport of mixed martial arts. In the two years that spanned from 2009-2011, Munoz tore his way up the ranks of the UFC’s middleweight division on the strength of an impressive seven wins in eight Octagon appearances. His only loss during that stretch came against perennial contender Yushin Okami, in a bout where the “Filipino Wrecking Machine” gave the Japanese powerhouse all he could handle throughout the three-round affair.

By the start of 2012, Munoz was on the cusp of becoming a legitimate title contender in the 185-pound fold. He was slated to face Chael Sonnen in the co-main event of UFC on FOX: Evans vs. Davis in Chicago, with the winner of the tilt a highly probable pick to face Anderson Silva in the pound-for-pound great’s next title defense. Everything Munoz had been working toward in MMA was lining up just the way he had planned, but in the strange way the sport mirrors everyday life, obstacles would arise and throw everything into chaos.

An unfortunate injury suffered in training would knock Munoz out of his bout with Sonnen in January and push him to the sidelines - his hopes of a championship opportunity skittered out the window. The “Gangster from West Linn” would go on to edge out Michael Bisping, who stepped in on short notice to replace Munoz in the bout, and solidify a rematch with “The Spider” in the process. 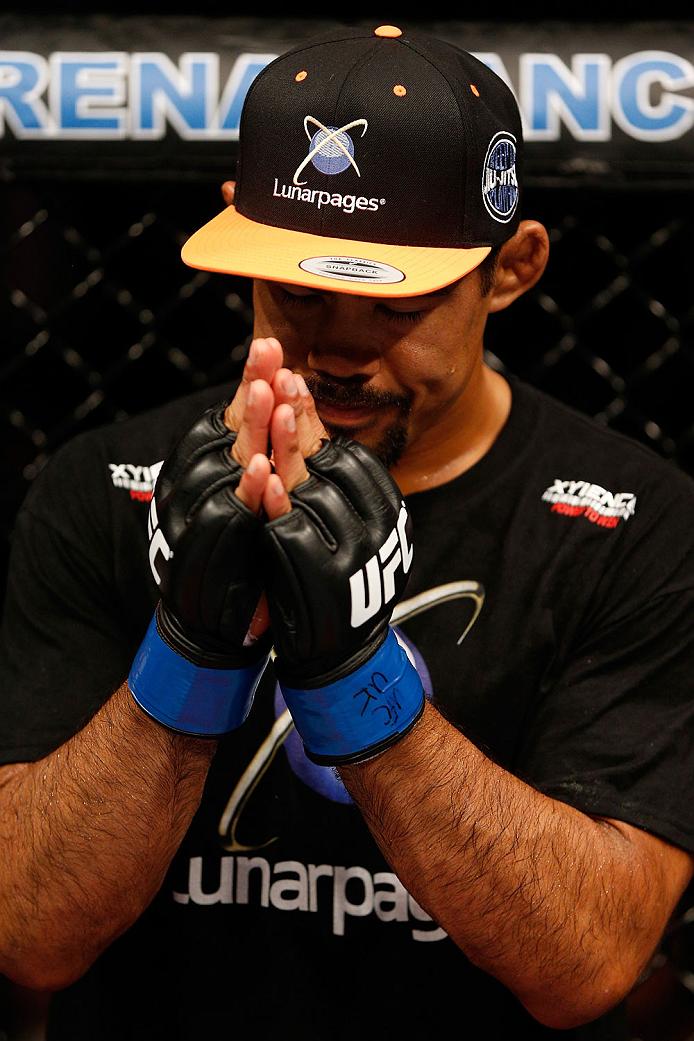 If those circumstances weren't enough to bring the 36-year-old’s spirits down, an extended layoff due to his injury being slow to heal was capped off by a knockout loss to then-upstart Chris Weidman in the second round of his return to action in July of 2012. In the aftermath of his loss to the Serra-Longo product, Munoz began to slide into a realm of depression where he would lose touch with the fire that once drove him to accomplish great things.

Where the goals he had long been chasing were once within striking distance, suddenly Munoz found himself back at square one. While lingering on opportunities missed and getting caught up on things that could have come to fruition is an easy trap to fall into, Munoz was determined to keep his focus locked on the things that matter in a positive realm.

“Those things do pop into my mind and I do replay them, but at the same time, I’m not going to waste time thinking about ‘what could have been,” Munoz said. “If I keep doing that I’m going to freak myself out, be anxious and I’m not going to train to my potential. But if I keep my focus on the here and now, and what is in front of me and the opportunities that could come from being successful in what I’m doing now, then I’m going to be moving in a positive direction. And that is what I have to work with because I can’t control the past. If I can’t control it, then why worry about it? I’m just going to drive myself nuts.

“When people do that they drive themselves insane and I just want to be realistic. I want to make the most of the opportunities I have right now and I can’t do that by focusing on the past. I would be lying if I said those things didn't pop into my mind from time to time, but I have learned from those experiences. When you keep a positive outlook, moments of adversity are only going to make you stronger, and I was determined to not allow those things to hold me back any longer.”

When our paths crossed that December night on the Seattle waterfront, there was something different in his eyes as he put a profound emphasis on his newly acquired mantra. “A setback is just a setup for a comeback,” he repeated with a smile that showed his signature positivity had returned, and over the next six months, he would work diligently toward making that comeback one to remember.

In the lead-up to his bout with Tim Boetsch at UFC 162 last July, the Southern California representative would put his blue-collar work ethic to the test as he prepared for his return. Munoz would melt down more than 60 pounds he had put on during his low period to emerge under the bright lights of the Octagon, appearing as if he was chiseled out of marble. In addition to his physical form being in peak condition, his performance against Boetsch followed suit as he rag-dolled “The Barbarian” en route to a unanimous decision victory in Las Vegas. 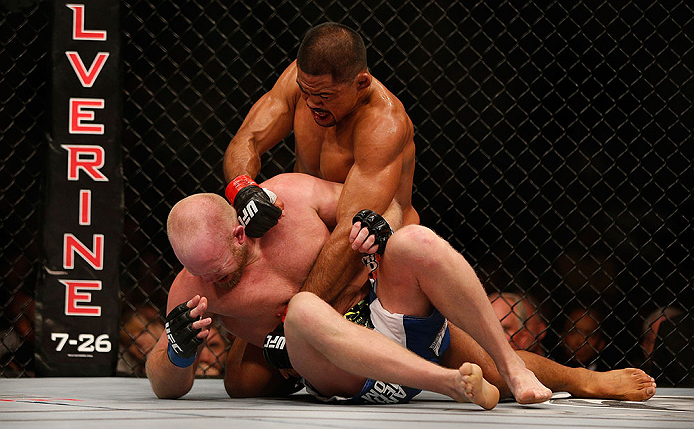 His victory over Boetsch marked the end of a chapter filled with trials and tribulations, and started another where the Munoz’s resiliency was the primary theme. While he would suffer another setback in his next outing against Lyoto Machida three months later in England, Munoz refused to allow his positive outlook to be forced into a backslide.

“I believe if you improve yourself every day, and you are better than you were yesterday, that progress is going to accumulate over time,” Munoz said. “There may be losses down the road, but you have to learn from them. There may be moments of difficulty and adversity in the gym, but you figure out ways to adjust what you are doing and rise above. I haven’t had the meteoric rise that some guys have experienced. I’m a veteran and I've grinded my way up the ladder.

“That’s my journey, man. That’s who I am and I use my story to inspire others. I want to have a lasting impact on people and show that hard work can make dreams come true. I have learned through adversity and those are things I can pass on as a coach, friend and training partner.”

With redemption burning in his brain, he set his sights on the next challenge on his path, and began his preparation for Gegard Mousasi. He will step in against the former Strikerforce champion in the main event of the UFC’s debut card in Berlin on May 31 in a tilt that will determine which fighter will remain in the hunt for a title opportunity at 185, and who will be reshuffled into the competitive middleweight deck.

While Mousasi presents plenty of interesting stylistic challenges, Munoz is determined to persevere. The comeback that started with Boetsch still has the potential to rage on, and he has every intention of making a memorable addition to his story this Saturday in Berlin.

“This is the first time the UFC has come to Berlin and I’m excited to be a part of it,” Munoz said. “It is a very historic city and it is going to be awesome.  Gegard is a very tough fighter and his style has presented a lot of challenges to fighters he has faced in the past. He does everything well, but there are some holes in his game I believe I can take advantage of.

“I believe I’m going to have an advantage in the strength department. Everyone that I fight has told me my strength is off the charts. I’m definitely not short in that area of my game. But it’s how well you use it and how well you are able to execute the technique in the fight. That’s what it comes down to.”

“If I have to think of one word to define my career it is resilience,” he added in conclusion. “I’ve weathered whatever storm has come my way and I’ve always battled back. That is what I’m going to do against Mousasi. I’m going to get back to the resurgence I started with my return against Tim Boetsch.”

A setback is a just a setup for a comeback…and the table will be set on Saturday night for Munoz to make all the sacrifice and hard work worthwhile.