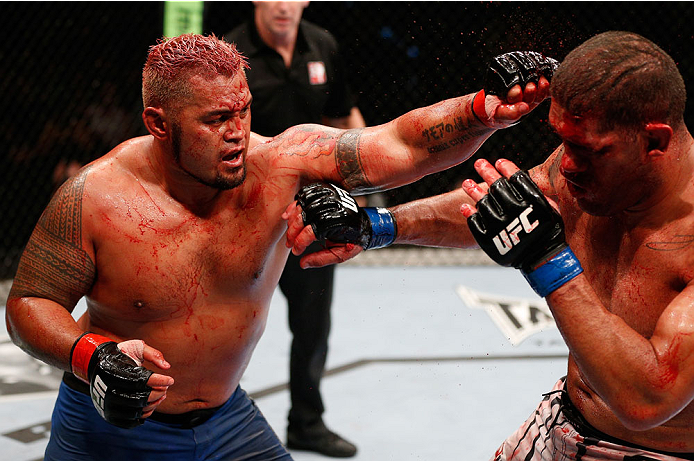 Some fighters lose their passion with age.  Their competitive fire is extinguished, and fighting becomes all about the pay check.

The opposite has happened for Mark Hunt, who fights Roy Nelson this Saturday in the main event of UFC Fight Night: Hunt vs. Nelson in Saitama Super Arena.

With six children (two adults and four under 10 years old) it’s fair to say Hunt has more responsibilities than ever.  But at 40 years old, the financial incentives aren’t the main motivator for the “Super Samoan,” who remains hungry for glory in the UFC’s Octagon.

“Of course, everyone’s gotta have money to live on and move ahead,” Hunt said when discussing his motivations. “Fighting was always about money but it’s not about money anymore for me; it’s about achieving a title shot and being one of the best fighters in the world like when I was in K-1. But I’m always thinking about my children. I’m a father and I always have to look after my children, and the responsibilities that I have now, the taxes and the rest of the jazz that comes with it, so part and parcel I say.”

Hunt has seen plenty of highs and lows in over 15 years in the fight game, as a former K-1 World kickboxing champion, and a veteran of Japan’s PRIDE FC Fighting Championships.  The New Zealand-born Sydney-based Hunt believes that experience makes him a hard man to defeat.

“You can’t really mentally hurt me in this game because I’m one of the most experienced fighters in there.  Of course my age and experience helps, everything helps, and I’m no beginner at this sport. I’m one of the best fighters on the planet, so of course.”

That’s not the first time the “Super Samoan” has referred to himself as “one of the best fighters on the planet” in recent times. It’s a phrase he’s become increasingly fond of. Perhaps that’s a sign of his growing confidence as he’s turned his career around. Hunt ended a six-fight losing streak in 2011, and has since scored KO wins over Stefan Struve and Cheick Kongo and earned a draw against Antonio “Bigfoot” Silva in one of the best matches in the history of the heavyweight division.  His only loss in recent years was against former UFC heavyweight champion Junior Dos Santos.

Now ranked in the top ten in the UFC’s heavyweight division, Hunt has plenty to be proud of.  Especially as a man who’s had his share of naysayers.

“It doesn’t matter what sport you do, you’ll always have your doubters, but it just gives you more fuel to the fire to push even harder and to achieve a lot more and be a lot more relevant,” Hunt said.  “For someone like myself to not be wanted in the UFC to being relevant in all these different countries and to headline, it’s a real honor for me to do that.  I feel really privileged as a fighter to be headlining for UFC in Japan.”

Part of Hunt’s renewed passion and purpose in fighting may be due to his becoming a born-again Christian.  These days, his fighting career has taken on a religious dimension and he does not see a contradiction between being a Christian and a professional fighter.

“It (my faith) helps me as a fighter,” Hunt said. “I believe in Jesus and God, and I believe in what I do, although people always give me a lot of stick about being a fighter, and beating up another man. But I use myself as a sacrifice to spread the gospel.  The scriptures say go out and spread the gospel, so a lot of people that do watch UFC that follow Mark Hunt as a fighter, they wouldn’t normally see what Jesus or God or faith is all about.  But that’s what the UFC platform provides for me. As a Christian I’m obligated and it’s one of the things I like to do.”

As he’s aged, Hunt has also refined his preparation for fights. While Hunt used to prepare with Florida’s American Top Team (ATT), he now trains in his birthplace of New Zealand.  While his current training camp may lack the name value of ATT, Hunt believes his fight camps are now going better than ever.

“Camp’s totally gone differently from the way I used to do things,” he said. “I’ve done the last five camps here in New Zealand with a group of great guys that are helping me now, so I’m getting much better and stronger. So back from when I was in K-1, to PRIDE to now, the camps have changed and I’m getting better.”

Preparing in New Zealand also gives Hunt the chance to fly back to his young family in Sydney.

“It’s (spending time away from family) part and parcel of what I do. I used to train in Florida and I couldn’t come back at all, so I’d spend 16 weeks at a time (in the USA).   Over here in New Zealand I can just jump on the plane on the weekend and go home.  Every two weeks I go back and see my family and then come back to camp.  Mentally it’s really good for me and it’s good for the family as well.”

This Saturday, Hunt faces an extremely tough test in Roy Nelson, a highly-regarded Brazilian jiu-jitsu black belt who is now better known for his brutal overhand right, and who most recently scored a vicious KO victory over legendary former UFC and PRIDE heavyweight champion Minotauro Nogueira.  Hunt thinks highly of his opponent’s skills.

But Hunt says he won’t be worrying about Nelson’s increasingly famous right hand.

While as a veteran of the fight game Hunt knows anything can happen, he does provide something close to a prediction.

“I think it’s gonna go depending on Roy and how much punishment he’s gonna take.  It might go five rounds, it might go short. It just depends.”

This fight marks another return to Japan for Hunt, the place where he won the K-1 World Grand Prix, and the veteran, who recently signed a new six-fight deal with the UFC, is eyeing a spot on the UFC’s November card in Sydney, Australia.  But first Roy Nelson stands in his way, a fact that’s not lost on the “Super Samoan”.

“Hopefully if I can get the win I can try and jump on the Sydney card, that’d be great. That’s what I’m trying to do, but first things first though (laughs).”