"Mark Hunt was one that wasn’t even wanted. He wasn’t good enough to be here, and he’s here knocking on the door for a title shot." - Mark Hunt 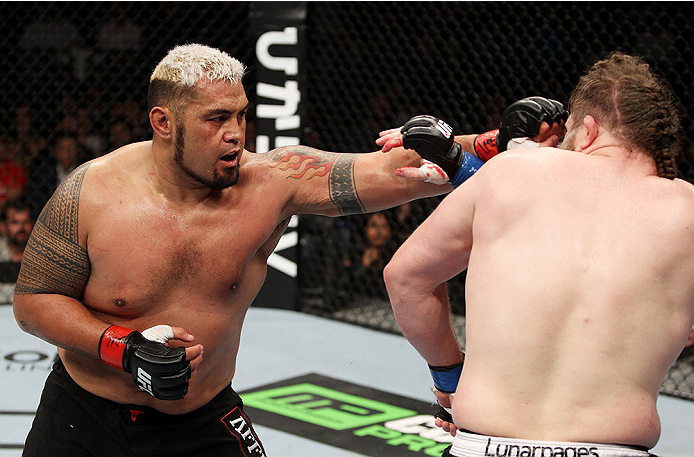 Four years ago, Mark Hunt was getting over a first-round submission loss to Sean McCorkle in his UFC debut and wondering where his career was heading. On Wednesday morning in his Australian home, he got word that he was going to be fighting Fabricio Werdum at UFC 180 on November 15 for the interim UFC heavyweight championship.

Hunt hasn’t forgotten those dark days and what people said about him back in 2010.

“Mark Hunt was one that wasn’t even wanted,” he said. “He wasn’t good enough to be here, and he’s here knocking on the door for a title shot.”

“The Super Samoan” laughs, content in the reality that since that fight with McCorkle, he’s gone 5-1-1 in the Octagon with four knockouts, five post-fight bonuses, and a fanbase that grows with each passing fight. And at 40, he’s still far from done.

“I think people like the underdog story, but I’m a real fighter,” Hunt said when asked about his appeal to the fans. “I’m a fighter for over half my life. 24 years of fighting in two different sports, and I’m still banging. I’m here trying to take these guys out. I haven’t got a martial arts pedigree or background; I didn’t even know I was going to be a fighter for all my life, but this is God’s will and this is what God wants me to do. This is the way I look at things, and I think that’s why people get excited. They want to see someone like myself, that’s overcome all sorts of obstacles, and he’s still here.”

Hunt isn’t making up the numbers though. Currently ranked fourth in the world, the New Zealand native is coming off an epic five-round draw against Antonio “Bigfoot” Silva in one of the greatest heavyweight fights ever last December, and last month in Japan, he scored a second-round knockout of Roy Nelson that had many talking him up as the next in line for the winner of the UFC 180 main event between champion Cain Velasquez and challenger Fabricio Werdum. But when a knee injury shelved Velasquez, Hunt got a phone call while taking his kids to school. And he didn’t hesitate to say yes when asked to fight in Mexico City in three and a half weeks.

“There was no hesitation,” he said. “I wanted this opportunity.”

That’s Mark Hunt. In fact, when asked about the difficulties he’s going to face on November 15, they really have nothing to do with Werdum.

“He (Werdum) provides the same difficulties as any other fighter,” Hunt said. “He’s a great fighter, but every fight’s the same – you throw one right on the chin and he’s gonna go out like everyone else. This is the heavyweight division. But I probably gotta lose about 20 kilos. It’s the only difficulty I’ve got now and the only thing I have to concentrate on - to make weight.”

That’s approximately 44 pounds in a little less than a month, but Hunt, who plans on leaving for Mexico City tomorrow, doesn’t sound too concerned. It’s part of the job, he’s been there before, and since the McCorkle fight, he’s had a new outlook on every aspect of the fight game.

“I think the difference is that I’m a Christian man and it’s God’s will,” he said. “I’m fighting the best fighters in the world and I’m still doing what I’m doing at my age. But I had to train and change my eating and everything like that. I train close to home so I can be with my family, and I do a lot of things (differently).  I said to myself that this is pretty much the end of your career and every fight, you must do it properly, and every opportunity that you get, you must take. And I never turned down a good opportunity that’s been put in front of me.”

They don’t get better than this, and if he wins, this miraculous comeback story will get a Hollywood ending. Does Hunt have a perfect scenario in mind?

“Only God knows how it’s gonna end, but I’m gonna try to end it by me knocking off Fabricio’s face and then going to get cake.” (Laughs)