Mark Hominick - Revving Up "The Machine" for Atlanta

"A lot of times in this sport, you’re only as good as your last fight,
so the way I kinda erase that is I go out there and I dominate."- Mark Hominick 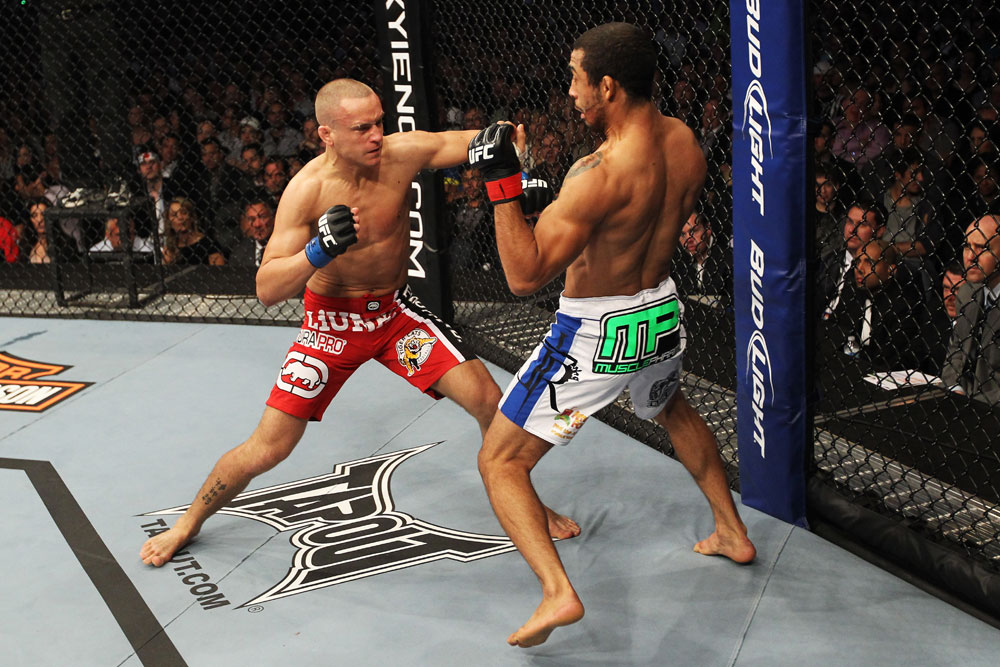 Not that Mark Hominick really needed any reminders, but hearing the joyous noise coming from his nearly year old daughter Raeya in the background during an interview before his UFC 145 bout against Eddie Yagin this Saturday is a friendly nudge to let him know what’s important in life.

“It definitely gives you a lot more excitement and a lot more focus,” said Hominick of fatherhood. “The path you’re going on changes a lot as well. That’s the biggest thing, just the day to day. We have so much fun during our time, so I really enjoy it. She comes to the gym too, so it’s nice. Our gym has a real family atmosphere and everyone’s a training partner to the people there, so it’s a big family, and she’s at home there.”

Family, both in and out of the gym, is what Hominick needed after what proved to be a trying 2011 year for him personally and professionally. The birth of Raeya to Hominick and his wife Ashley was the unquestionable high point, but the sudden death of his longtime coach Shawn Tompkins and two crushing UFC defeats were reality checks no 29-year old needs.

Yet while his five round decision loss to Jose Aldo at UFC 129 earned a Fight of the Night award and was a competitive 25 minute battle, his seven second knockout defeat at the hands of Chan Sung Jung at UFC 140 was harder to deal with, though he also learned how to let it go and move on.

“That last fight, it was such a letdown on all accounts – to myself, to my fans, and for me going in there and wanting to prove so much,” said Hominick. “So yeah, there are a lot of letdowns, but I didn’t want to sit and dwell on it too much because it was a seven second knockout. If I would have gone out there and got dominated for three rounds, then I could say ‘okay, I gotta go back to the drawing board and fix a few things.’ But I was in great shape, I just came in out of character and I paid the price for it.”

Hominick, now 20-10, also puts to rest any talk that the Jung fight came too soon after the August death of his mentor and coach.

“It wasn’t too soon,” he said. “I just went in there with the wrong mindset. I went in there with a chip on my shoulder trying to prove something as opposed to just going out there and winning. I just wanted to win so bad that I fought out of character.”

Having been down that road before, Hominick knows that after such setbacks, the best remedy is to get right back in the gym and in the Octagon. Hence Saturday’s bout in Atlanta, a fight originally scheduled for his native Canada, but later switched to the States. If UFC 145 landed in Montreal, it would have been his third consecutive appearance in his home country, but “The Machine” isn’t complaining about having a little more low-key outing this time.

“It was a nice change of pace,” said Hominick of the lead-up to Saturday. “There’s a lot of added pressure fighting in your home country. It (fighting at home) is definitely a huge opportunity and something I want to do moving forward, but it was a little quieter leading up to this training camp as opposed to the others, so it’s nice just to focus on the task at hand. This fight (UFC 145’s main event between Jon Jones and Rashad Evans) is so huge, and it’s kinda stealing all the hype for the fight, so it’s nice to be on the main card, but also having the responsibility to just focus on training.”

That training with his usual Team Tompkins squadmates, including Sam Stout and Chris Horodecki, has been supplemented by visits to Illinois to work with an old friend, UFC vet Jeff Curran.

“Jeff was with me for my first fight in the UFC at UFC 58 (vs. Yves Edwards) and he cornered me for my second fight against Jorge Gurgel, so we’ve had a longstanding relationship with Curran Martial Arts,” said Hominick. “And after Shawn passed, it was my first thought to go back there, but I almost had a chip on my shoulder with that last fight, because I wanted to go out there and prove that we’re not changing, we’re not going anywhere, we’re Team Tompkins. And we’re definitely gonna carry that name on, but I have to go in there and I need great coaching, and that’s what Jeff represents. He’s been with Team Tompkins for over eight years now.”

Hominick sounds as if he’s in a good place mentally leading up to the fight, and when he’s on, he’s tough to beat. And even though Hawaii’s Yagin isn’t a household name, Hominick is more than familiar with “The Filipino Phenom,” and he wasn’t surprised that he wasn’t given a more high-profile foe for the main card PPV bout.

“I’m coming off a loss, so whoever the UFC gives me, I’m gonna take,” he said. “I know Eddie very well. When I was 18 or 19 years old, I fought in Hawaii, and I remember him being the main event back then. So he’s been around a lot longer than me and he’s got a ton of experience. He just hasn’t had the exposure. So for me, I heard that name, and I’m like ‘okay, that’s a seasoned vet.’ Even though it’s a newcomer to the casual fan, I know him a lot better than a lot of guys that the casual fan may know. He’s got more of a track record, more experience, and more years in the game than a lot of the guys in our division combined.”

So expect a scrap on Saturday night, because that’s what Hominick is training for. He’s not looking forward to the rest of the year and the idea that a couple good wins can get him right back in the title race. He knows that without a win over Yagin, any such scenarios will fade into the background.