"I’m realistic. I understand my back’s against the wall here and I have to win this fight, and that’s what I’m gonna do." - Mark Hominick 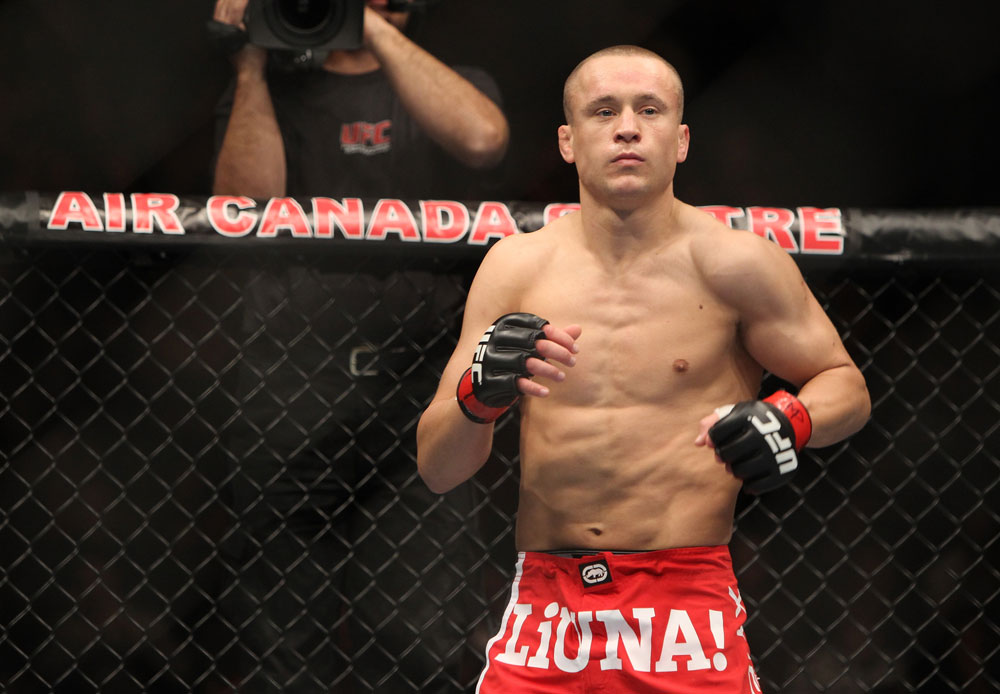 It’s the question no one wants to ask, but everyone has to. Luckily, when dealing with UFC featherweight Mark Hominick, he makes it as painless for you to ask it as it is probably painful for him to answer it countless times in the lead-up to his UFC 154 bout with Pablo Garza this Saturday in Montreal.

The question? How does he deal with the pressure of fighting to break a three fight losing streak this weekend?

“I’m realistic,” he said. “I understand my back’s against the wall here and I have to win this fight, and that’s what I’m gonna do. This is a fight where I’ve been given the opportunity to again be on the main card of the Pay-Per-View, and this is an opportunity not a lot of people get, coming off three losses, to be showcased like this. So I’ve got to go there and perform and win.”

He makes it sound so simple and so straightforward, though with all the variables that go into each and every fight, how could it possibly be? But Hominick, not just a gentleman but a true professional, has been down this ‘must win’ road before, and the way he’s approached the Garza fight is the way he’s approached each of the previous 31. As just the next fight.

“I really didn’t give it that much thought until I started hearing all the interviews, and for sure, that’s one of the first questions,” he laughs. “But I’ve always tried to keep a positive outlook from my last three fights, and yeah, I’ve had three losses, but in one I took one of the best pound-for-pound fighters (Jose Aldo) to his limit, I made a seven second mistake with “The Korean Zombie” (Chan Sung Jung), and the last fight was a split decision (against Eddie Yagin) in which I thought I could have earned the decision. So I look at it like I just gotta get the W and get the ball rolling back where I belong amongst the top in the division.”

No one could have put it any better when it comes to Hominick’s last three outings, and perhaps that’s why he’s still here and on the main card. Or maybe it’s because of something he neglected to mention, that the Aldo and Yagin bouts both earned Fight of the Night honors. And despite dealing with the blood, bumps, and bruises that go along with punishing bouts like that, Hominick still greets everyone with a smile and a kind word, a testament to his upbringing and his acceptance of his place in the game as not just an athlete, but a role model.

“Ever since I started martial arts, I definitely changed as a person,” he said. “I was 13 years old and it gave me a lot of direction and a lot of strength, but now I do think I have a responsibility as someone who can motivate others and be a role model whether it be kids or adults. I take that pretty seriously and it motivates me every day.”

At the same time, given his positive upbringing, it’s no surprise that his mom doesn’t particularly enjoy what her son does for a living.

“My family and my mom especially, they’re never gonna be fans of the profession I chose,” he said. “My mom’s not gonna be at the fight, sitting there cheering me on. My wife, I put her through heart attacks every time I step in the cage, but they understand who I am and the profession that I chose. And that’s when I’m at my realest. I love getting in the trenches. That third round with Eddie, I’m at my happiest right then.”

So has mom ever been to one of his fights?

“She’s been to one, but I don’t think she made it through the whole bout,” he laughs. “That was years ago in Montreal. She’ll watch at home now with other people, just because back then there were 10 people watching, and now there’s 10 million. So there’s a big difference in the scope, and if she wasn’t watching everybody would be talking about the bout anyway, so there’s a lot more awareness than when we started.”

No Montreal this weekend then?

“That adds stress to the situation,” he chuckles, but if anything, Hominick does know why his mother feels the way she does, especially now that he’s a parent, with another child on the way. That can change the way you look at everything in life, and coupled with Hominick turning 30 this past July, it was definitely time to re-evaluate his life and career.

“I don’t really think of it as being 30,” he smiles. “I think of it as hey, I’m in over ten years of being a professional MMA fighter. I’m going into my 11th year fighting professionally, so that’s the way I’m looking at it, like okay, this is it. I don’t want to compete against the B-level guys or in the farm shows or anything like that. I want to fight in the UFC, I want to fight against the best guys, and the time to do it is now.”

To keep those goals intact heading into 2013, he’ll need to turn back the challenge of Garza, a talented prospect who has had some highlight reel efforts of his own heading into Saturday’s matchup. He also has a healthy respect for Hominick, not surprising considering that “The Machine” has been doing his thing in MMA for over a decade. The Thamesford, Ontario native is happy to receive such kind words from his opponent, but on fight night, it won’t matter whether Garza is a fan or not – they’re going to scrap.

So how does he plan on showing that gap in experience when the bell rings?

“I have to get after it a little earlier than I’m used to,” he said. “If you look at my career, I am a slower starter, and my best rounds are later in the fight. I think with a guy like Pablo, who is newer, the longer you keep him in the fight, the more confidence he’s gonna build. So as soon as the bell rings, I won’t be like I was in “The Korean Zombie” fight, coming out wild and throwing sledgehammers, but I’ve got to dictate how the fight’s going.”

It’s the thoughtful and sensible response you’ve come to expect from Mark Hominick on every subject, and even though he’s only 30 years old, his maturity level skyrockets him way past that relatively young age. But according to him, he’s lived a lot more life – good and bad – than most people his age. And it’s made him the man he is.

“If you look back at the last six years, so many life changes have gone on,” he said. “I lost a dad, I lost a mother-in-law, we’ve had the opening of the gym, getting married, fighting for the world title, losing (longtime coach) Shawn (Tompkins), having a baby, expecting another one. So I think I’ve lived a lot of life in my 30 years, but I think all those things make you stronger, and if you think that way, it can and it will. Even with the passing of Shawn and the losses I’ve had, I’ve never been in a rut. I’ve always been motivated, and with Shawn, my motivation is to carry on his legacy, and the way I do that is I go out there and I win. And the same thing with everything else; I’ve always stayed motivated and hungry.”