People don’t understand all my fights, like all my fights, have been short notice. Every time they call, they call me for a reason. It’s good and it’s bad.”
By Zac Pacleb • Aug. 30, 2019

Mark De La Rosa is getting ready for his second flyweight fight. He made his 125-pound debut in the UFC in July 2018 and his other three Octagon bouts have come at bantamweight. As I begin to ask which weight class feels more like home, he offers a third solution.

“I feel more at home with a fight camp,” he told UFC.com. “People don’t understand all my fights, like all my fights, have been short notice. Every time they call, they call me for a reason. It’s good and it’s bad.”

Good and bad is a fair way to describe his stint in the UFC thus far. In four fights, De La Rosa is an even 2-2, and though he said he is not one to “shy away from a challenge,” the 24-year-old is excited about finally getting to prepare for a fight the way he wants.

“I’m able to prep my body,” De La Rosa said. “I’m able to break down an opponent, work with my strengths against his weaknesses and just actually strategize, game plan and break somebody down.”

It’s an ideal situation heading into what’s likely the biggest fight of his young career. His opponent, Kai Kara-France, holds a top-10 ranking and is riding a seven-fight winning streak. It’s a prime opportunity for De La Rosa to raise his profile, and his goals are pretty simply put. 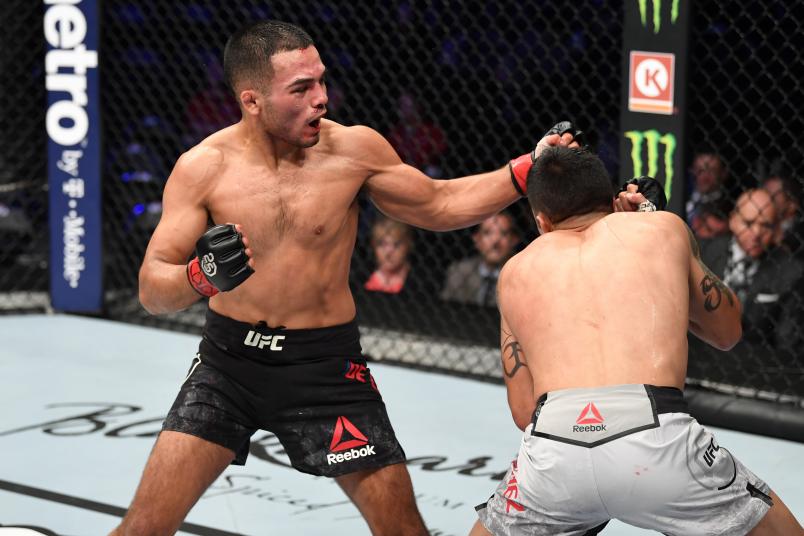 He said the opportunity to fully and properly prepare for this fight brought a sense of reassurance, and it could provide a shot at really gaining some traction in the 125-pound division.

“He’s very exciting,” De La Rosa said of his opponent. “He has a big following. He’s got a lot of hype behind him and stuff, and I got to prepare for this fight.”

When De La Rosa walks to the Octagon, he said his mentality isn’t going to be any different than any of his other fights despite the confidence he feels from the full fight camp. Essentially, his thoughts right before he heads into the cage are relatively straightforward.

Naturally, he is inclined to put on a show and chase a $50,000 performance bonus, but right before he gets into the cage, he reminds himself why he’s fighting.

“I just remember where I came from, the people who brought me up, the struggles of my family, the struggles I had to deal with,” he said. “I use that to zone the hell in.”