"I’m there to win, but all I can guarantee is putting my best performance forward and winning takes care of itself." - Mark Bocek 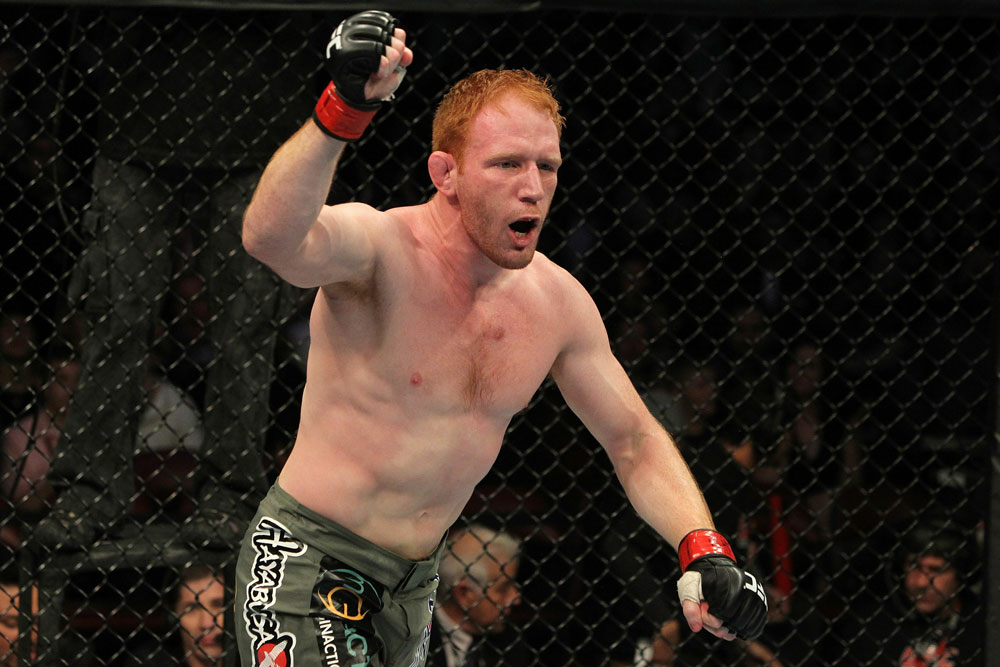 When talking about his first round submission win over Dustin Hazelett last December, lightweight contender Mark Bocek chuckles when he says “I wish they could all go like that fight,” yet he’s quick to qualify that statement with “but obviously they can’t.”

It’s been one of the keys to his success thus far – enjoy the good times, but don’t enjoy them for too long because there’s work ahead. And for every fight that ends in 2:33 with your hand raised, there will be 15 minute wars of attrition that will test more than your technique.

For Bocek, that kind of test came in his UFC 111 bout with Jim Miller in March of 2010. For three rounds, the two battled back and forth on even terms, yet when the final verdict was rendered, it was for Miller, even though many believed the Toronto native should have gotten the nod.

“I trained really hard for that fight and it hurt not to get the nod there, it really did,” he said, sounding as if the defeat still hits a nerve. “I’ve watched that fight many times to make sure that it’s not just what people think, and I thought I won the fight, but I’m not a judge and it’s not my call. My job is to fight. But it’s in the past and you can’t control what’s in the past. Jim’s a great fighter and best of luck to him. He looked great in his last fight and he’s doing great.”

The loss snapped a three fight winning streak for Bocek, who had turned the corner after a rough start to his UFC career that saw him drop two of his first three bouts, albeit to future 155-pound champ Frankie Edgar and veteran standout Mac Danzig. In terms of losing momentum, it was a killer, and when you lose a fight by that close a margin, it can sometimes be worse than getting knocked out or submitted. So fans and pundits watched closely to see how Bocek would react in his next fight against fellow submission ace Hazelett.

Turns out that they didn’t need to worry.

“I was gonna play around with the standup a little bit, but he’s got a really long reach and he dropped (Josh) Koscheck and arguably took round one off him, so I kinda decided to play it a little safe by taking it to the ground,” said Bocek. “Once we hit the ground, Dustin’s a really good grappler, but I’m really used to dealing with rubber guard guys, so I know where not to make the mistakes there.”

He didn’t make any. Instead, like any high-level Brazilian Jiu-Jitsu black belt, he caught on to Hazelett’s mistakes and made him pay, submitting him with a triangle choke.

It looked easy, but when you make it look that way, it’s because of over 15 years of training on the mat, training that forced Bocek to leave Ontario in order to study with the best in the game. His current port of call is Coconut Creek, Florida, where he trains with American Top Team, and he had no regrets about having to take his show on the road to follow his dreams on the mat and in the Octagon.

“It wasn’t tough at all,” he said. “This is what I want to do. I like traveling, I’ve been to a few locations before coming to Florida, and this is what I do, so it’s got to be done. I gotta seek out the best guys to train with, and here I am – I enjoy it.”

Bocek doesn’t need to worry about seeking approval from a cast of thousands either, as he has a core group of family and friends that support him in this toughest of sports.

If you’ve watched the 29 year old over the course of his UFC career, you might even say too seriously, as the poker-faced Bocek rarely showed emotion – good or bad – in his early days in the organization. But in recent months, the affable Canadian has been letting the world in a bit, not only through post-fight interviews where he called for the best the division has to offer, but through the usual social networking channels like Twitter and Facebook.

“People want a little hype behind fights and it makes it more exciting,” he said. “People like seeing Primetime and they like seeing guys like Chael Sonnen. Hey, I like seeing guys like Chael Sonnen and I can listen to the guy all day. But I think calling people out is great, and it’s nothing personal. I think people are a little ridiculous if they take it personal because it’s not at all. It’s just a sport, the fans like it, and without the fans, you don’t have much of a sport. So the more people talk about you, positive or not, the better it is and the more people will want to see you fight, win or lose.”

And if you’re wondering, yes, he’s having fun with it, even if at times it’s to get a reaction out of people.

“Sometimes I’ll make a few comments on Twitter like “Twisters are easy to get out of” or “that guy should have better takedown defense,” and I’m just doing it for fun, but I make one comment like that and I’ll have fifty people telling me that I suck, that I’m garbage, and that I’m nobody,” he said. “But they don’t realize that I’m just doing it to get a rise out of them and it’s really too easy.”

Of course, don’t expect a full-on Sonnenesque assault on his opponent at UFC 129 this weekend, former WEC lightweight champ Ben Henderson, because as he says, “that was never my personality to begin with.” But what you can expect from the two classy lightweights is an intriguing battle that could go anywhere once the bell rings. And though conventional wisdom dictates that Bocek will be looking to take the bout to the mat immediately, don’t bet the house on that assumption.

“I think they kind of overlook the rest of my game as well,” said Bocek. “They think I’m a really one-dimensional fighter but I’ve been working on a lot of things. This next fight will really show what I’m capable of.”

He won’t refuse a ground war though, and like Miller and Hazelett before him, Henderson is a talented ground fighter who wouldn’t mind testing himself against one of the best grapplers in the game. Getting that type of respect from your peers is a badge of honor Bocek wears proudly.

“It’s a nice compliment, absolutely, but I do feel that I’m the best grappler at 155 pounds,” he said. “Anything can happen in a fight though; fighting is fighting, and not all fights hit the ground.”

There are no shivers or shakes at that possibility though. It’s what Bocek has trained for and what he’s prepared to do – he’s going to fight, wherever it goes, and whatever happens will happen.

“I don’t put any pressure on myself for fights,” he said. “Nobody can guarantee winning or losing. I’m there to win, but all I can guarantee is putting my best performance forward and winning takes care of itself. When I step into the cage, I can safely take a deep breath and tell myself ‘you’ve done everything you needed to do for this fight.’ So I’m just gonna go in there and enjoy it.”