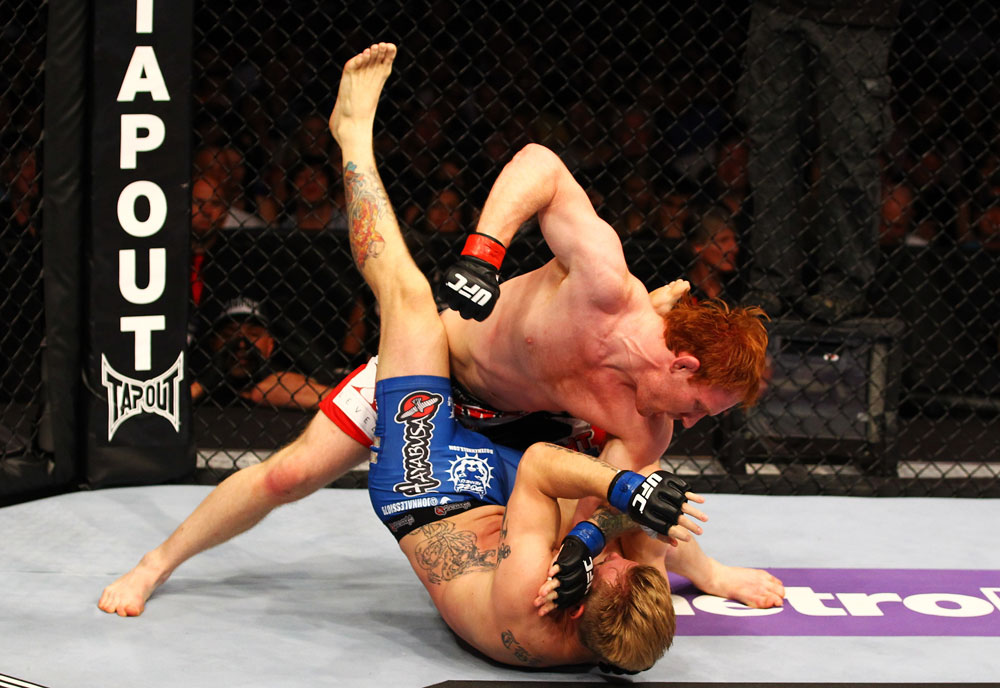 When you are a traveling athlete, competing in your own country and close to home can only be a boost to your confidence.  This is true for Mark Bocek, who meets Brazilian Rafael dos Anjos in Montreal at UFC 154 this Saturday.  Not too far from his Toronto stomping grounds, Bocek has gone 3-1 in Montreal and has even garnered a Submission of the Night victory over Dustin Hazelett there at UFC 124.  Needless to say, Bocek feels a bit sentimental on his return to Montreal, where the mix of wins and losses remind him of his previous UFC inexperience and eventual ascension.

“Yeah Montreal is close to my home,” he said. “My loss here to Mac Danzig, I was still starting. It was my seventh MMA fight and I was still learning.  I still am (learning), but I was extremely green at the time. But my last time here I got Submission of the Night and I’d love to get a repeat. I’d love to end this fight in the first round but Dos Anjos is kind of a dark horse under the radar, and he’s a very tough opponent.  I’d love to get a finish in the first round but I’m prepared to go all three.”

Currently on a two-fight winning streak, Bocek has quickly rebounded from a unanimous decision loss following the Hazelett win to Ben Henderson.  Defeating Nik Lentz at UFC 140 and John Alessio at UFC 145, both via unanimous decision, Bocek is ready to extend that streak to three in his home country.

“Those were my first two fights with Tristar (Gym).  Lentz is a tough guy with a tight guillotine and he actually had me in a tight guillotine in the second round but I was able to kind of control the top position and squeak out a victory.  It wasn’t maybe the most fan friendly fight, but I was coming off that decision loss to Benson (Henderson) and just winning was the priority for me at the time,” said Bocek soberly.  “Alessio was a last minute replacement for my first opponent, Matt Wiman, but I’ve seen him around for many years, never looked at him too closely but knew he’d be a tough guy.  I knew he’d be a good striker so I figured I’d just out wrestle him because I knew I’d have the edge in the wrestling and jiu-jitsu areas.”

Bocek is one of the rare athletes that can claim instructing both Lorenzo Fertitta and Dana White in Brazilian Jiu-Jitsu, which in retrospect is undoubtedly an ironic factoid now that he fights for their organization.  As a submission specialist, he had a chance to prove himself to the owners of the UFC way before actually competing for them and perhaps even opened their eyes to the possibilities of the ground game.

“They were already MMA fans at the time, and they were already diehard about the sport.  Maybe they didn’t understand the intricacies about grappling or about what it takes to be efficient in that area.  I wasn’t their first instructor but I was kind of there during their brief introduction you can say.  Like I said, they were already fans, but I think I opened their minds a little to the subtle nuances of grappling.”

Bocek’s next challenge lies in dos Anjos who also is on two-fight winning streak after a decision loss to Gleison Tibau at UFC 139.  His last two bouts, against Kamal Shalorus and Anthony Njokuani, resulted in a first round rear naked choke and unanimous decision victory, respectively.  However, Bocek kept it real with expressing his feelings about dos Anjos’ submission prowess, and that his last two wins were far from an indicator of the Brazilian’s problematic status and were less challenging fights in comparison to him.

“I think his biggest weakness is going to be jiu-jitsu, but that’s just me looking at it from one BJJ guy to another.  Another person might look at that as a kind of crazy thing to say but that’s kind of how I look at it.  (Kamal) Shalorus is at the end of his career pretty much so it’s hard to get much from that win.  (Anthony) Njokuani, most people that have cardio and can wrestle and avoid strikes with Njokuani are going to out wrestle him and beat him.   Now that he’s paired up against a guy that can wrestle and grapple as well, I think people are going to start to see his weaknesses.”

However, Bocek does recognize the strengths of his opponent while still letting his confidence ring through.

“He’s shown some versatility, and he comes from BJJ like myself.  He’s shown a good evolution in his game, he’s on a two fight win streak just like me, and he seems to be pretty well-rounded, so it looks like it will be a tough test but I’ve been training very hard.  I’ve been at Tristar for the past five weeks, so I’ve had a lot of southpaws to work with and a lot of BJJ guys to work with and I plan on edging him out in every area.  He’s used to being in bad positions and fighting out of them, but when I look at it, my analysis overall is that there is nothing aside from his kicking ability that stands out to me as something that he is incredible at.  I think he is good all-around but I don’t think he’s great at anything. I think I’m better in every area than he is.”

Having now been on the big stage for over five years consistently, Bocek is at a good place in his life.  With a winning streak and the opportunity to extend it in front of his countrymen on a card that boasts the return of Georges St-Pierre, Bocek is ready for Saturday.

“I feel good.  I got in the UFC really early and pretty green in my career and I’ve never lost two fights in a row.  Every loss I’ve had I’ve taken something from it, I’ve improved, gotten motivated, and gotten hungrier.  I’ve taken this one very seriously and I’m very happy where I’m at right now and I look forward to this one. This one’s going to be very fun.  I want to put on an exciting fight, I want to get the ‘w’ and that’s first and foremost why I’m here. And I feel with a win here I deserve to be in the top ten.”