Mariya Agapova is Living Her Dream

Mariy Agapova can't wait to make the most of her second chance when she takes on Hannah Cifers on Saturday
By Gavin Porter, on Twitter: @PorterUFCnews • Jun. 9, 2020

When Mariya Agapova pictured her UFC debut, she saw the bright lights on the Las Vegas strip and thousands of fans cheering for her in the fight capital of the world.

And while the stands inside the UFC APEX will be empty, Kazakhstan’s Agapova will live her dream on Saturday June 13.

“I’m just really glad to be fighting here in Vegas. It was my dream to fight here, and so when I came for Dana White’s Contender Series, I was really excited,” Agapova told UFC.com. “But I lost that fight, so I was really excited to be able to come back here and have another chance.”

Agapova lost to Tracy Cortez that night on DWCS, but even though that match didn’t go her way, the 23-year-old showed that she had the talent to compete in the UFC. The American Top Team product is known for her creative striking that she defines as “colorful,” and she believes that when she takes the Octagon on Saturday, she will paint a pretty picture for fans.

“I am good in all situations, but I will definitely rely on my striking,” Agapova said. “I just want to make it beautifully colorful. I like colorful things like the lights in Las Vegas and I don’t care who is watching, I just want my fights to be fun and exciting.” 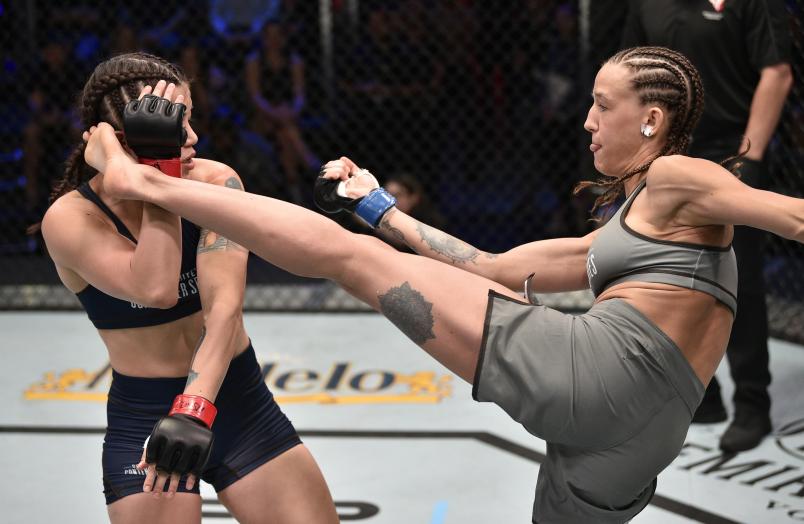 Standing across from Agapova will be Hannah Cifers, who fought Mackenzie Dern at UFC Vegas less than two weeks ago on May 30. It is a quick turnaround for Cifers, who lost the bout against Dern by first round submission.

Cifers is replacing Melissa Gatto after visa issues forced her from competing, but the change in opponent doesn’t concern Agapova one bit and she is excited to showcase her striking against the durable and war ready Cifers.

“I don’t care who steps into the Octagon with me,” Agapova said. “I know she is a striker and I think it will create an interesting matchup when we fight. People who are fans of fighting love to watch fighters stay standing up and striking. It will be a colorful fight.”

The fact that Agapova is making her debut against Cifers shows that she is a real prospect for the flyweight division. At 8-1 she has finished six of her wins, five in the first round, with her lone loss coming to Cortez last summer.

Since her DWCS appearance she finished both of her Invicta FC opponents and while she believes she has put herself in a position to make some noise in the UFC, she is more excited to just live in the moment.

“I am going to try to make it violent and I’m going to enjoy myself,” Agapova said. “That’s my only goal.”

Make sure you watch Agapova’s UFC debut live on ESPN and ESPN+ this Saturday at 6pm ET / 3pm PT.