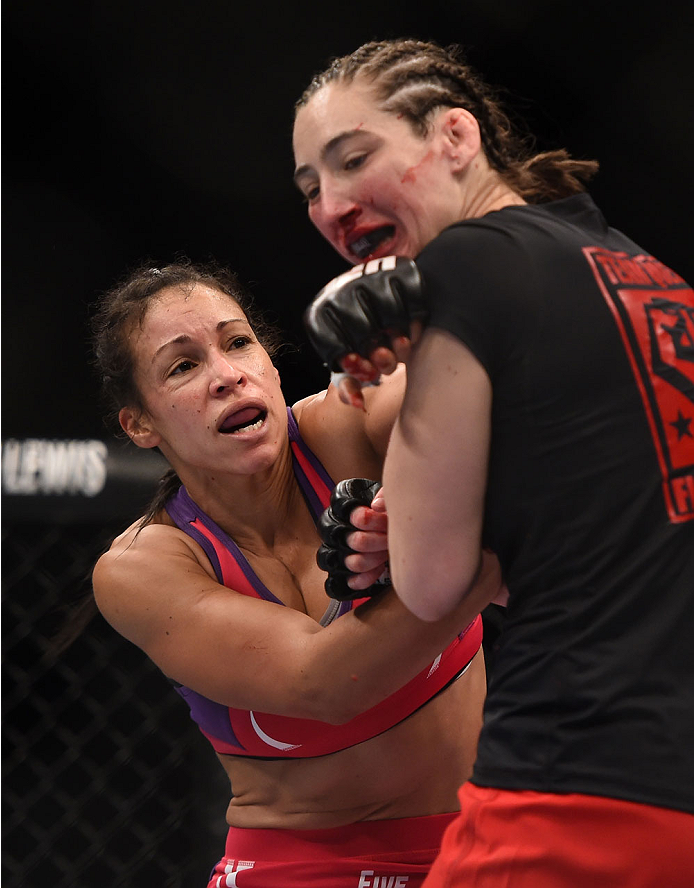 “I am on a charge,” bantamweight Marion Reneau said, and she is not kidding.

In less than two months time, “The Belizean Bruiser” went from earning an utterly-dominant unanimous decision win in her Octagon debut at UFC 182 to securing a Performance of the Night bonus via first-round triangle choke over a top 15-ranked Jessica Andrade at UFC Fight Night: Bigfoot vs. Mir.

Already 2-0 in the UFC, Reneau is set to make her third Octagon appearance this year as she excitedly sprints towards a clash with Holly Holm on Wednesday.

“I’m loving this ride,” Reneau said. “I have nothing to complain about. I’m really just enjoying the ride and trying to take it as far as I can and for as long as I can.”

The eagerness shown by the 38-year-old Californian to follow-up an Octagon entrance in January which yielded winning scorecards of 30-26, 30-26 and 30-25, by flying to Brazil in February to battle Andrade - who was on a three-fight UFC win streak is just incredible. It’s shades of Donald “Cowboy” Cerrone. Some may write it off as an aspect of her age, but it’s really because Reneau wants fights, and that wasn’t always an option in previous organizations.

“Prior to joining the UFC, it was pretty difficult for me to find fights,” Reneau said. “As soon as my debut fight with the UFC was done, I went to my management and said, ‘Get me another fight, ASAP.’ I don’t want to go through another six to eight-month dry spell. It was my idea. I felt good and I was ready to go. My team agreed and the UFC agreed and I was able to get a quick turnaround.”

After outstriking her opponent 3-to-1 in her first bout, the Brazilian jiu-jitsu brown belt finally showed off her vaunted grappling skills, and as soon as she did, the fight was over. “When we landed on the ground, I felt like, ‘Okay, let’s do work’,” said Reneau, who ate a big punch early, lost her footing and found herself on her back with Andrade on top of her. Panic did not ensue and The Belizean Bruiser immediately went into action attempting triangle chokes, of which Reneau’s second try forced Andrade to tap.

“I take a lot of pride in my jiu-jitsu,” Reneau said. “I have studied it, I have drilled it, I teach it. Everything about jiu-jitsu, I could sit here and nerd out with you in regards to it. I really respect the ground game. When we came to the ground, it felt natural. It wasn’t something I had planned. I was going from one transition to the next and I was doing so without thought, and that’s the whole thought behind drilling in jiu-jitsu. You do it so much in practice that I was calm. It felt like everything was going in slow motion to be honest. When they told me it was a 1:54, I was like, ‘What? It felt like five minutes.’ Everything felt like it was in slow motion and that everything was taking forever (laughs).”

A quick finish time wasn’t the only shocking news, as this physical education teacher from Farmersville High School was also a Fight Night bonus winner - even if Reneau didn’t understand it right away. “When they told me I got the bonus, I was like, ‘Yeah, you get the fight and the win bonus,’” Reneau said. “My coach shook me and was like, ‘You got THE bonus! The $50,000 bonus.’ I was like, ‘Noooo!’ I just made more than what I make in a year of teaching.”

Up next, Reneau aims to continue her downhill running up the bantamweight ranks as takes on striking specialist Holm at UFC Fight Night: Mir vs. Duffee. With an 8-0 pro record, “The Preacher’s Daughter” has been perfect in MMA since leaving her old gig as a multiple-time world champion in professional boxing. The longtime Team Jackson-Winkeljohn standout made her Octagon debut at UFC 184 with a split-decision win over Raquel Pennington. While many would feel threatened by Holm’s mighty resume, The Belizean Bruiser is ready to run over whoever is put in front of her.

“I ask myself that question all the time - why am I doing this? - and it’s because I want to be number one,” Reneau said. “I want to be the top dog. They’re going to put other top dogs against me, so that’s what I have to be prepared for and I have prepared myself. In my mind, she’s another girl in a cage and it’s in a different arena. That’s how I go into it. She’s just another female that I have to get through to get to the top. Nothing more.”

In preparation for Holm, Reneau is busy sharpening her weapons both on the feet and on the mat. For her ground game, Reneau rolls with Tom Knox of Elite Team and Cleber Luciano of Cleber Jiu-Jitsu. For her striking, The Belizean Bruiser hits mitts with former WEC light heavyweight champ Doug “The Rhino” Marshall and famed Muay Thai coach Rafael Cordeiro. As a fighter’s mental game needs to be as strong as their physical one, Reneau understands better than anyone the power of her momentum and her confidence.

“I think I’m just a dangerous fighter right now,” Reneau said. “I’m a fighter on a mission. I’m a fighter out to make history. I’m going to be one of the oldest fighters in the bantamweight division. I’m just your average, everyday girl. I still go grocery shopping, wash my car and do laundry. I’m just the everyday homemaker for my son and my fiancé, but I’m hungry. I’m hungry to be number one. She might be the same way, but I don’t care. The outcome will be my hand raised in the end.”

This Wednesday in San Diego, an irresistible force will collide with an immovable object as the surging Reneau meets the unbeaten Holm.