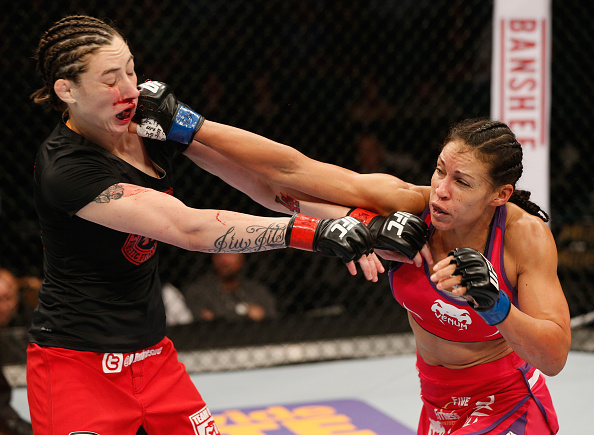 There are easier ways to put together money for your child’s college tuition fund, but don’t tell that to mother, high school teacher, Jiu-Jitsu brown belt and UFC bantamweight Marion Reneau, who several years back wondered, like any other parent, how she was going to eventually afford college for her now 13-year-old son.

“I was struggling,” she admits. “I was a single mother, and even as a teacher I was living paycheck to paycheck, trying to pay the bills and his daycare expense, which was a lot of money, and not only that, but I was renting at the time and paying a car note. It was very expensive.”

A lifelong athlete who received college scholarship offers for soccer and track and field, opting to become a heptathlete at the University of California Long Beach, Reneau soon found something that caught her eye which could also make her some money on the side.

“I saw Gina Carano on TV once,” she said of the female fighting pioneer. “I looked it (mixed martial arts) up and I’m like ‘she got paid to do that; I want to get paid.’ (Laughs) I’ve always dreamed of being a professional athlete, so I wanted to do that. I thought this is the only way I’m going to have extra money, if there is such a thing as extra money, so I started training, and I loved it. I didn’t even have a vision in my head of the UFC. I just wanted to go to a big show. I didn’t care where it was.”

So why not the biggest, as Reneau is one of the newest members of the women’s bantamweight roster in the UFC, a talented prospect about to engage in her second Octagon bout this Sunday in Porto Alegre, Brazil against Jessica Andrade. The match comes a little over a month after her UFC debut, a three-round unanimous decision win over Alexis Dufresne, but the quick turnaround was no issue for “The Belizean Bruiser.”

“I’m not going to say no,” she said. “Honestly, after the fight, I wasn’t tired. I didn’t feel like I took a lot of damage, and I was healthy. I was able to take a week off and get right back into training, which is what I was going to do anyway. Three hard rounds, that’s great, but I practice for five five-minute rounds. So it was not a big deal for me to turn right back around and have another fight.”

So no hesitation, especially considering that Brazil’s Andrade is ranked tenth in the world at 135 pounds?

Those are fighting words, or at least words from a fighter, which isn’t surprising since Reneau’s father and uncle were boxers in Belize and Jamaica, and though she says that her dad, “even now, doesn’t really like his girl doing this,” when he saw Reneau’s UFC debut in which she displayed a rock-solid striking attack, he had to grudgingly admit that it was “in her blood.”

Yet the funny thing is that despite three of her four wins heading into the Dufresne bout coming by knockout, including a 10-second finish of Lydia Reyes in October of 2012, Reneau was considered to be primarily a ground fighter, with her brown belt in BJJ proof positive of her prowess on the mat. She even got a chuckle out of the pre-fight preview of her bout, which set the stage for a grappling-heavy battle with her fellow brown belt.

“I was laughing at that,” she said. “I heard that and I said ‘little do they know.’”

Reneau caught Dufresne by surprise too, as she kept it standing, lighting up her opponent with a blistering right hand that sent shockwaves through press row.

The scary part is that she’s able to handle herself in both realms, making her an intriguing addition to the division. And while the story of her debut focused on the apology given to her after the fight by UFC president Dana White after he revealed that she wasn’t passed to the next round of the Ultimate Fighter 18 tryouts because of her age, the 37-year-old is now in the position to make significant noise at 135 pounds as a serious contender. So when was the moment that she went from putting together some tuition money for her son to believing that she could one day become a world champion?

“Right now,” she laughs. “I was kind of hesitant and I had never been in front of cameras to this extent, so I went to the UFC, and I was like ‘I can do this.’ You dream a little bit bigger, and why not? I always tell my students, ‘never stop making goals for yourself.’ Never stop trying to attain what people think as the unattainable. This could happen.”