Injuries Kept Mario Bautista Out Of The Octagon in 2020 But Now That He's Slated To Fight On Saturday's Stacked UFC 259, He's Excited To Pick Up Where He Left Off.
By Thomas Gerbasi, on Twitter: @TGerbasi • Mar. 5, 2021

Mario Bautista had dodged enough bullets when it came to serious injuries. Outside of a broken collarbone he suffered in high school, the Nevada native had been through just the usual nicks and knocks that come with the territory as a pro mixed martial artist, but last May, just after he was going to get a summer assignment to try and extend his current winning streak to three, everything stopped when he tore his right pectoral muscle.

“It was a rough, rough year,” said the 27-year-old bantamweight, who makes his first start since February 2020 when he takes on Trevin Jones on Saturday’s UFC 259 card.

It’s Bautista’s first bout in his home state as a professional, but after such a long wait to return, he would have been happy fighting anywhere.

“I've just been training,” he said. “It's been a long year, but I just can't wait to get back in there.”

Bautista does return with some momentum behind him, as his last two wins over Jin Soo Son and Miles Johns earned him Fight of the Night and Performance of the Night bonuses, respectively. He was scheduled to take on Davey Grant last March, but the COVID-19 pandemic scratched that bout. Then came the same injury that struck his MMA Lab teammate Jared Cannonier. 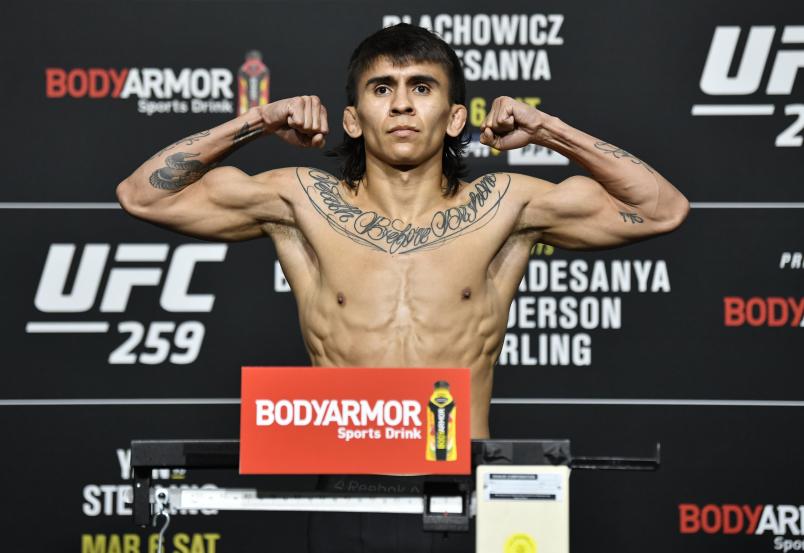 Mario Bautista poses on the scale during the UFC 259 weigh-in at UFC APEX on March 05, 2021 in Las Vegas, Nevada. (Photo by Jeff Bottari/Zuffa LLC)

“He ended up having the same injury during my fight week for Miles Johns,” said Bautista. “I was there when he tore his pec, and he was two months ahead of me, so I watched him recover from that. He's always a positive guy, and he was making pretty big progress in two months, so I wasn't too worried about how I was gonna feel afterwards or how it was going to impede anything. So I was looking up to Jared because he was going to the same physical therapist that I was and he had the same surgeon I did and obviously the same tear.”

The middleweight contender made a full recovery and was back in the Octagon last October, going three rounds with former champ Robert Whittaker, and Bautista is feeling just as confident in his return, one he hoped would have seen him back in action in January, but with the hectic bantamweight picture, fight slots are getting filled up in rapid-fire fashion. So here he is, and he’s happy to be back in the mix in perhaps the sport’s most compelling weight class.

“I think it's an exciting division,” said Bautista. “Every year there's some new guys coming in, some new names and bigger names like Khabib's cousin (Umar Nurmagomedov). That brings more light to the division, and this whole last year, watching my teammates Kyler (Phillips), Casey Kenney and Sean O'Malley do their thing, I never wanted to be in there more. It feels like it made me hungrier and I just want to get in there and be a part of that spotlight with all those guys.”

And going through a serious injury has made Bautista even more grateful to be back to work. 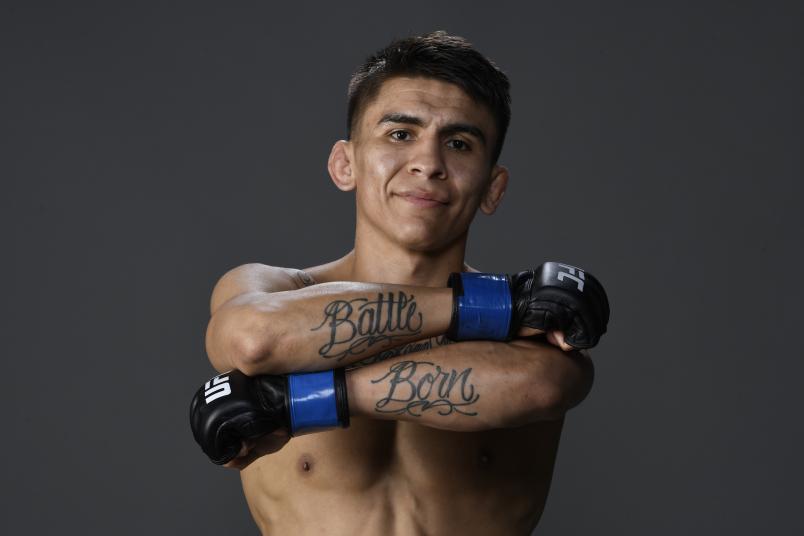 Mario Bautista poses for a portrait backstage during the UFC 247 event at Toyota Center on February 08, 2020 in Houston, Texas. (Photo by Mike Roach/Zuffa LLC via Getty Images)

“Having an injury like that and sitting out on the sidelines, it does make you itchy and it makes you realize that it could be taken away from you pretty quickly,” said the father of a two-year-old daughter. “Just a little training session, nothing crazy, and it could be taken away from you for a whole year. So I definitely want to get in there and do this while I can.”

He can. And he will. Welcome back.

“Especially after the performances that I've had - Fight of the Night and then a Performance of the Night - I think people are gonna be excited to see me back and see what I'm gonna do next.”