Bantamweight Puts Loss Behind Him, Jumps Back Into The Shark Tank
By Thomas Gerbasi, on Twitter: @TGerbasi • Feb. 16, 2022

“It's been a long two years,” said Mario Bautista in the lead-up to his Saturday bout against Octagon newcomer Jay Perrin.

It started out well enough for the bantamweight prospect, who made it two wins in a row in February 2020 with a Performance of the Night knockout of Miles Johns.

But three months later, Bautista tore his pectoral muscle and was out for six months. Once healed, he got a short notice bout against Trevin Jones, but he lost that one in March 2021. He expected to be back in August of last year, but then COVID hit him.

“That really kicked my butt,” he said. “But we're booked for February 19th, and I'm just praying everything goes straight.”

It didn’t, with Perrin stepping in on short notice to replace Bautista’s original foe, Khalid Taha. But at least he’s got a fight, and that’s all that matters to the 28-year-old Arizonan, who hopes to snap his one fight a year pattern in 2022.

“It was a good camp, the fight is early in the year, so I can possibly fight every quarter and at the very least three times this year. I got a clean slate to get everything started again and get myself back out there and really make a run,” he said.

Bautista has the potential to do just that, and he was on the right track after his back-to-back wins over Jinsoo Son and Johns. Then Jones spoiled everything, stopping Bautista in the second round. Was it just a bad night, or did he come back too soon from injury?

“No, I was ready to roll,” he said. “The physical therapy turned into strength and conditioning, so I was in really good shape. But he (Jones) was a southpaw and that was the first time I fought a southpaw in the UFC, so I needed a little bit more planning and a little bit more of a camp and I think that was the biggest thing. I really didn't change a lot afterwards. I think my preparation was the thing.” 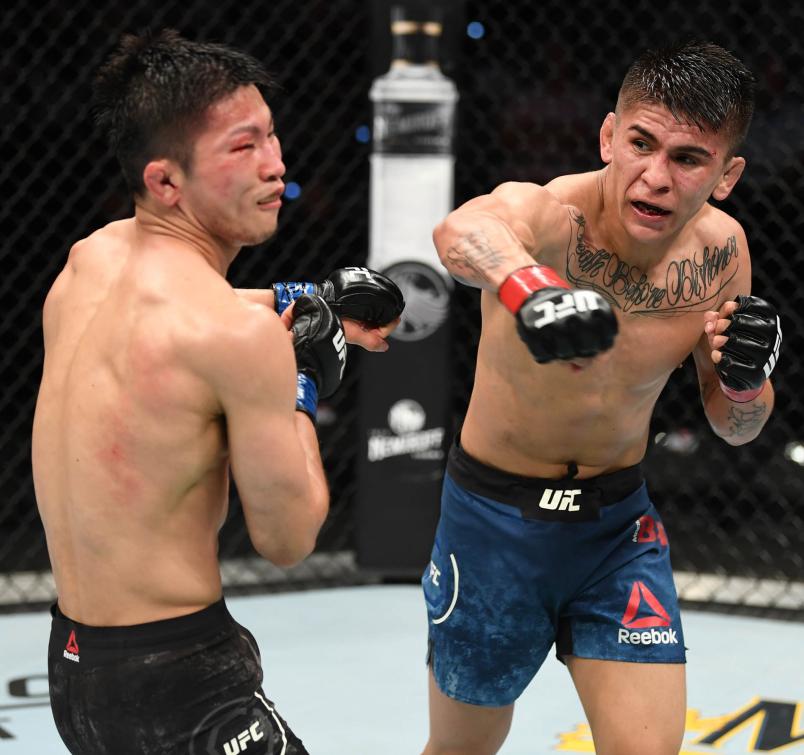 Everyone always hears about what a nightmare it is to fight a southpaw. So what is it that makes fighting lefties something to dread?

“It's a little different when you're in there,” Bautista said. :Sometimes you catch yourself circling the wrong way. It's a different distance, and southpaws are used to fighting conventional fighters more than conventional fighters are used to fighting southpaws. So they're used to it, it's a different distance, and that's the thing you really gotta prepare for. Two and a half week notice, it's kinda hard, but it is what it is, and it was a good learning experience. For that (Guido) Cannetti fight that I was supposed to have, he was a southpaw, so I had a good ten weeks of just training for that. So I got some good experience training for a southpaw.”

Bautista could put some of that work to good use this weekend, as Perrin is comfortable in both stances, but no matter which way the New England native stands, Bautista is ready to get down to business, get the win, and keep swimming through the bantamweight shark tank.

“Even outside the Top 15, you have some good guys out there,” he said. “The people that come to mind are Jack Shore, Nate Maness, Umar Nurmagomedov, and they're not even in the Top 15 - they're getting there. And when you get into the Top 15, you've got a whole row of killers, so it's not an easy path to the top right there. But it makes it exciting. It's a good challenge each step of the way, so it's definitely exciting.”

Exciting, not intimidating. That’s the difference between a fighter and the rest of us.

“That's what gets me up and keeps me going, knowing these guys are out there,” Bautista said. “And I want to be part of it and I want to beat those guys. That's what motivates me, that's what makes me want to get back in the win column and get my name back out there so I can get matched up with some of these up and coming guys or maybe someone with a good name. It keeps me going.”