Becoming a UFC fighter can change a life in many ways. For some, like Mario Bautista, it means being the first result that pops up when his name is Googled, knocking the Mexican pop star with the same name out of that spot. Sure, the singer still has the space on the right side of the page still to himself, but the bantamweight remains hopeful.

“It’s a little unfortunate, but hopefully one of these days we’ll be right above him,” said Bautista with a chuckle.

All kidding aside, life is different for the 26-year-old since he stepped up on short notice to face Cory Sandhagen in January. The UFC deal has allowed him become a full-time fighter, and while he didn’t get the win against Sandhagen, he is moving forward as he heads into a Saturday meeting with Jinsoo Son in San Antonio.

“If anything, I just get to continue with this journey,” he said. “With the last fight that I had, I was able to quit my job and focus full-time on training. And with a win over Jin, I’ll be able to keep on training, possibly buy things I need for training and I’ll focus more on MMA.” 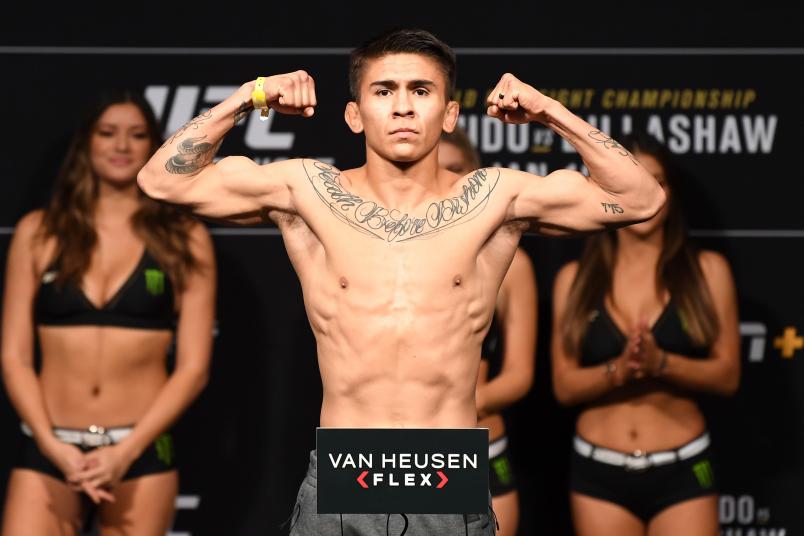 That’s all good news for Bautista, who nearly had some more when he fought Sandhagen in Brooklyn. Facing the future top 10 contender, the Arizona newcomer bounced back from an early knockdown to seemingly take control for a brief moment with a slam before Sandhagen came back to end the fight via submission at the 3:31 mark.

“I think I was thinking a little too much and not going off muscle memory,” said Bautista. “I had that opportunity, and I’m thinking I’m gonna slam this guy. Unfortunately, I slammed myself right into a submission. I was able to get out of it, but then I got caught again. I just got caught up in the moment.”

That’s understandable, being in a position to possibly take over and win a fight that few expected him to win on short notice. But when it was over, Bautista knew that he belonged in the big show.

“Definitely, just being in there with the amount of time I had to work with, I did pretty good, especially against an opponent like that,” he said. “Cory’s doing pretty amazing right now and he’s got the big fight (with Raphael Assuncao at UFC 241) lined up, so I felt like I belonged in there. Every loss I’ve had, I’ve come back stronger from it.” 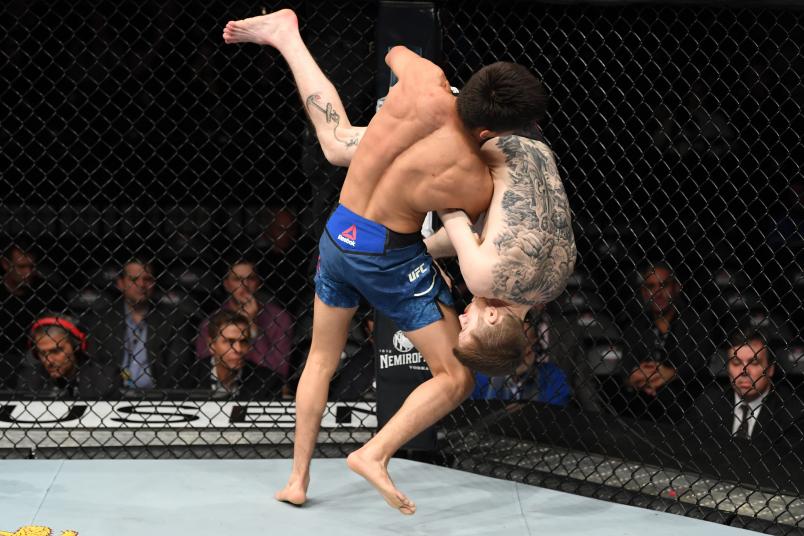 NEW YORK, NY - JANUARY 19: (R-L) Cory Sandhagen attempts to submit Mario Bautista in their bantamweight bout during the UFC Fight Night event at the Barclays Center on January 19, 2019 in the Brooklyn borough of New York City. (Photo by Josh Hedges/Zuffa

Well, if my math’s right, Bautista is 6-1 as a pro. Correct, he says, but he also counts his amateur loss to Josh San Diego in 2012 in this equation.

“He (San Diego) went on to Tachi Palace and I think he fought for that belt and he fought for Bellator,” said Bautista. “And I was still an amateur when he was doing this. So I lost that fight, but I saw that he was doing pretty good, so I knew I could get to where he was at.”

It’s clear that Bautista has a long memory, and that will serve him well in the future because he won’t make the same mistake twice. That future begins Saturday against Son, who impressed in a losing effort in his UFC debut against another 135-pound contender in Petr Yan.

“As soon as I looked up his name, I saw that Petr Yan fight and I remembered it immediately,” said Bautista. “It was a good fight, they went back and forth, and I think Petr was a little bit sharper, but I remember it being a pretty tough fight, and he’s a tough guy.”

In other words, just the kind of fighter Bautista wants to share the Octagon with this weekend.

“I like a little bit more of an exciting fight, and especially for me, it will open up more opportunities to set up guys,” he said. “So with Jin being so tough, I think I’ll be able to show a lot more of my skills against him.”