Heading into her first fight of the year, Marina Rodriguez spoke about her desire to stay active.

Coming off a year in which she only fought once and where her journey to Abu Dhabi in July was marked by lengthy quarantining and limited preparations, the talented Brazilian strawweight was excited about the potential beginning her 2021 campaign with a fight in January could mean for her staying active and getting back to logging multiple trips into the Octagon this year.

“I really would love to have a three-fight year in 2021,” she told me ahead of her bout with Amanda Ribas at UFC 257 in January, back on Fight Island. “And of course, (I want to be) always facing fighters that are well-ranked in my weight class.”

So far, everything has worked out exactly as planned for the 34-year-old Muay Thai stylist fighting out of Florianopolis, who makes the walk for the third time this weekend to face fourth-ranked Mackenzie Dern in her second consecutive headlining assignment.

RELATED: Saturday's Fighters On The Rise

After earning an impressive second-round stoppage win over Ribas in January, Rodriguez jumped at the opportunity to face Michelle Waterson in May, the ranked strawweights venturing up to the 125-pound weight class temporarily for the short-notice main event matchup on ESPN. Though the fight came a little sooner than she anticipated returning, the opportunity was too good to pass up, and Rodriguez made the most of it, earning a clean sweep of the scorecards to register her second consecutive victory and extend her record to 14-1-2 overall.

“It was a great opportunity,” she said of the bout with Waterson, where she earned scores of 48-47, 49-46, and 49-46 to register the most high-profile victory of her career. “My coach Marcio Malko knew I was able to fight for five rounds even with the little notice because he has always trained me to fight five rounds since the beginning of my career.”

That foresight from her coach is going to continue serving her well as she steps in for a potential five-round tussle with Dern on Saturday.

A multiple-time world champion in Brazilian jiu jitsu, the 28-year-old Dern was one of the most talked about prospects to transition into the sport in the past decade, reaching the UFC after earning four victories under the LFA banner and a third-round submission win over former title challenge Kaline Medeiros in her lone Invicta FC appearance. She validated her advanced billing with consecutive victories over Ashley Yoder and Amanda Cooper (now Brundage) in her first two Octagon appearance, but then pressed pause on her career to start a family.

Just four months after her daughter Moa was born, Dern returned to the UFC, stepping in against Ribas, who handed the rising star her first career loss, but since then, the talented submission specialist has been white-hot, registering four straight victories heading into Saturday’s meeting with Rodriguez.

“Her first fight back was a bit out of the ordinary,” Rodriguez began when asked her impressions of her opponent. “But I think that would happen to anyone after a long period without being able to train regularly and also without competing.”

Prior to her bout with Waterson, Rodriguez believed she would still need one more victory before a championship opportunity would come her way, and envisioned sharing the Octagon with either former champion Joanna Jedrzejczyk or Chinese star Yan Xiaonan, if she were to get by surging former titleholder Carla Esparza, who edged out Rodriguez on the scorecards in 2020 to bounce her from the ranks of the unbeaten.

But as different fights played out, the division moved forward, and the next round of matchups came together, the talented striker knew a matchup with the streaking Dern made a great deal of sense.

“Dern was in sixth and then fourth (in the rankings), so it made sense for me,” she said, “especially since Joanna is inactive and Yan is coming off a hard loss.

“Her going to fourth in the rankings even after a few months from her fight was a great motivator for me,” added the Brazilian, who his currently stationed two spots behind Dern in the strawweight Top 10. “As usual, it served to push me in my training and move me forward.”

Saturday’s main event clash with Dern is the fourth time in five fights that Rodriguez has been matched up against an opponent whose primary approach is grappling, having shared the Octagon with Ribas, Esparza, and Cynthia Calvillo prior to her bout with Waterson. 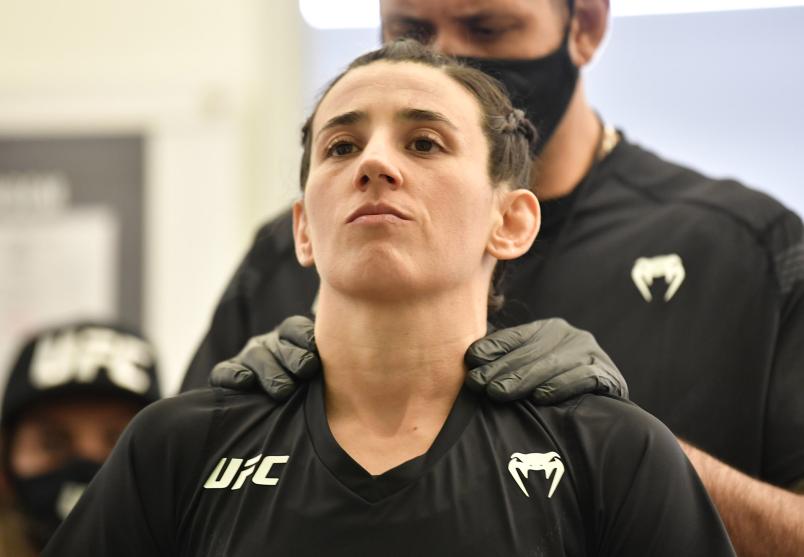 Marina Rodriguez of Brazil prepares to fight Michelle Waterson in a flyweight fight during the UFC Fight Night event at UFC APEX on May 08, 2021 in Las Vegas, Nevada. (Photo by Chris Unger/Zuffa LLC)

Though she showed solid takedown defense in her last outing and demonstrated an ability to land effective offense from her back in the bout with Esparza, Rodriguez has no issue with continuing to be paired off with opponents that will likely look to take her down.

“It's a part of the game,” she said of frequently being the striker in a string of “Striker vs. Grappler” assignments. “I have to fight the best; it has been like that since my debut. This makes me improve constantly and makes me a more complete fighter.”

With a strong record, consecutive victories over ranked opponents, and a secure position in the Top 10, Rodriguez is already a part of the title conversation in the 115-pound weight class, and rather than worrying about when her opportunity will come, she’s focused on getting closer each time she steps into the Octagon.

“This what I have been training all these years for,” she said. “I believe my chance to fight for the title is ever closer, so winning my next one in spectacular fashion should bring me much closer to my title shot.”

And that’s exactly how she hopes Saturday’s contest plays out.

“I believe I can get a knockout in the first couple of rounds, or we will be there for a five-round war,” she forecasted. “So I’m hoping it's the first option!”