Marin Putting Everything Into Saturday Night 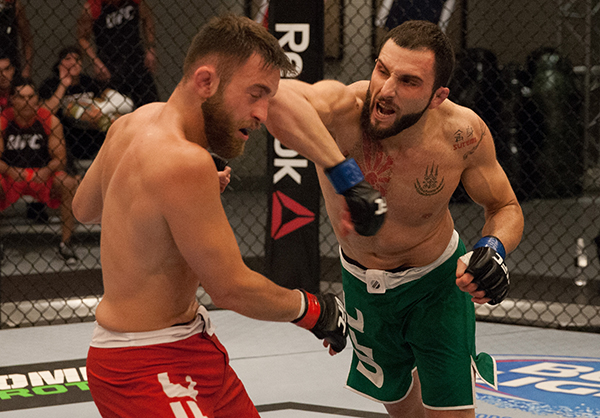 With rare exception, Brazilians have cornered the market on interesting fighter nicknames; at least when those nicknames are explained and given a back story. Spain’s Enrique “Wasabi” Marin is that exception.

“One day, I was having dinner with a friend in an Asian restaurant and we ordered sushi,” he said. “Naturally, there was wasabi on the side of the plate. I thought it was guacamole and I ate all the wasabi there was. I suppose you can imagine the rest of the story. I almost died.”

He laughs about it now, but anyone who has tasted a dab of wasabi can just imagine what a whole lump of it can do to you. But Marin is a fighter, so he’s made of tougher stock than the rest of us. That also means that when he faces his Ultimate Fighter Latin America 2 teammate, Erick “Perry” Montano, in the series’ welterweight final this Saturday in Monterrey, Mexico, he’ll be able to deal with the emotions that come with facing a friend.

“It's not difficult, because inside the Octagon, there’s a big difference between the two contexts: friendship and professional,” he said. “We are friends, but we are professionals too, so we’ve gotta fight and after that I’m sure we will come back to being friends.”

At 29, Marin is not the elder statesman among the four TUF LATAM 2 finalists; that honor would go to the 30-year-old Montano. But he does think that at this point in his career, he is “in a mature stage as an athlete.” It’s an opinion strengthened by his time in Las Vegas for the show, where he earned his place in the final with wins over Kevin Medinilla and Hector Aldana.

“That experience was the most amazing of my life,” he said. “But at the same time it was the hardest, because it was more emotional than physical. The most difficult part was to keep in balance your mind and your body, because you suffer a lot of damage to your body, so you need a very strong mind that can deal with that, and with being totally disconnected from your family, friends and your environment.”

Some are better equipped to deal with the whole TUF experience than others, and having studied martial arts since the age of 15, then turning pro in MMA in 2007, Marin has seen a lot over the last 14 years. In fact, the only thing that may have hurt the Seville native is having to work his way up the ladder in a country that is far from a mixed martial arts hotbed.

“MMA in Spain is in a teenager stage,” Marin explains. “There are a lot of good fighters there, and hopefully their opportunities arrive like mine arrived. There are a lot of very good gyms for training. But in Spain there are not real professionals because all professional fighters have to have another job to live because our jobs as fighters are not enough. But I think that the point of view about this sport is changing because the media is showing the sport, and people are understanding that behind a fight there is a long life of sacrifice as an athlete.”

Marin has had to travel that path in order to pursue his fighting dreams, working as a barman and bouncer when he wasn’t in school, but it was all for a greater goal, one he’s about to fight for this weekend. If he wins, he will be Spain’s first Ultimate Fighter. But he’s not ready for the “pioneer” tag just yet.

“I don't feel like a pioneer in my country,” he said. “My humility doesn't allow me to think like that. I only used the opportunity that was put in my way. There are a lot of fighters in my country who deserve same opportunity.”

Marin is humble, he can fight, and while you may have to watch him closely on a trip to the local sushi place, he has a chance to open doors for Spanish fighters to enter the UFC. But that’s a conversation for Sunday. Now it’s all about Saturday night.

“Everybody who knows about that told me that TUF changed their lives a lot,” he said. “But I will only know it when the final happens. And I’m sure it will be an amazing fight.”