Marcus LeVesseur - Prepping for a Blockbuster Hit at Home

"It's going to be like New Year’s Eve that Friday in the city and I get to be one of the fighters that is making it like that and I'm thankful and I'm ready to give it my all." - Marcus LeVesseur 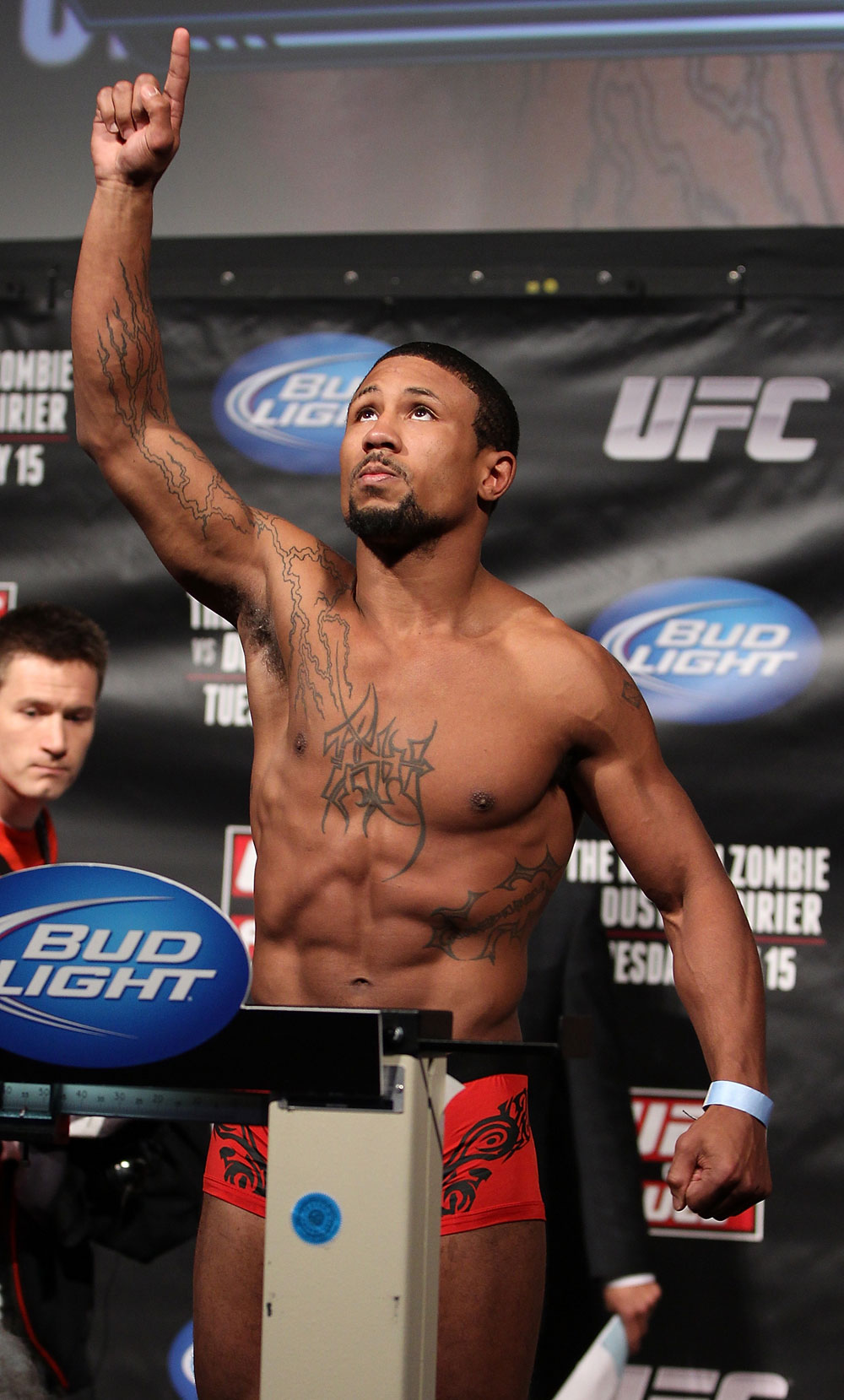 A common literary technique is for the hero to first stumble and fall when within reach of their goal to only make it more triumphant when they return and succeed in their second attempt when the stakes are that much higher. While that always works out great for fictional characters, it takes a lot of sacrifice and effort for a real athlete and a real fighter to accomplish such a storybook ending. That’s the simplified plot outline UFC lightweight Marcus “The Prospect” LeVesseur is entrenched in as he lost his debut, but is coming back stronger to win in his hometown of Minneapolis, Minnesota at UFC on FX 5.

“For me as a mixed martial arts fighter, to fight at the highest pinnacle - the UFC - in my hometown, it feels like it was scripted,” tells LeVesseur. “I'm just excited to get a chance to fight again, and then my hometown adds an extra bonus and extra fire. It's a dream come true. I'm just looking forward to it. It's a fight, 15 minutes to go the distance. I fought the majority of my fights here, in state, and I'm used to my routine. Yes, it's for the UFC, it's a big show, it's X amount of thousands of people that are going to be there, but it's a home fight for me. I don't know if I'll have a clear advantage because it's a home fight, but that's how I feel. I couldn't script it any better for my bounce back opportunity.”

At 30 years old with a professional record of 21-6, LeVesseur’s initial appearance inside the Octagon was all too quick and disappointing in a first round submission loss to Cody McKenzie in May. Stepping up for an injured Aaron Riley on three weeks’ notice, he fully admits that the infamous UFC “jitters” hit him hard entering the cage, which he did not expect given his plethora of past experience in MMA and, prior to that, wrestling. Although the “McKenzietine” is a powerful weapon, ultimately, LeVesseur didn’t defend against it properly, as his nervousness exceeded his preparedness.

“Obviously, he has that one move that is very successful for him,” believes LeVesseur. “Nothing to knock him at all, he is very talented with that particular situational position. I didn't overlook him, we trained for that position. But I think the 'jitters' got caught in my head and my judgment. When he first had it on, I felt good and safe. Then he repositioned, got me off balance, and, boom, it was over. Looking back at that, you have to have a clear mind and you have to be mentally moving as well as keeping your body physically moving, whereas in that position at that time, my mind was moving, but not my body. I just kind of froze.”

On a ten scale, LeVesseur rated his own performance a 2 out of 10, but recognizes that it got his feet wet in the UFC and he’s ready to show off who he really is as a fighter. “I'm pretty explosive, I'm fast, I'm powerful, I'm strong, a pretty good wrestler with high impact takedowns, and I like to think that I'm a pretty intelligent, well-rounded fighter,” says LeVesseur, who is not one to brag, but is underselling himself in almost every one of those mentioned areas. As a “pretty good wrestler”, LeVesseur was a 4x NCAA Division III National Champion and cultivated a perfect 155-0 winning streak at Augsburg College in Minneapolis. In addition, “The Prospect” won 4 state championships in high school and with that combined, “the streak” was 296-0.

“It was kind of like a videogame,” explains LeVesseur. “If you master a character on a videogame, and you go to compete against your friends or online, you're going to win a lot of those battles. Same thing applied with me and wrestling. I mastered my wrestling style and I knew what my opponents had against me and that I could stop it. I knew if my opponent had his right leg forward or his left leg forward I knew what I could do against them. I've pretty much mastered my own wrestling style, which was a huge advantage for me compiling the streak.”

Being that wildly successful in any endeavor requires sacrifices. Wrestling was like a full-time job for LeVesseur in both high school and college. He trained endlessly regardless of wrestling being in season or not. LeVesseur sacrificed his opportunity of going to the University of Minnesota to instead go to a smaller school to wrestle more. Those choices were difficult to make, but LeVesseur believes they were for the best and, now, he is applying that same mindset to his cagefighting career.

“Maybe two or three years ago, I remember being in the MMA world, not knowing if I was going to make it, trying to make it, wanting to make it,” discloses LeVesseur. “You get kind of sidetracked, or at least I did. As of lately, I thoroughly understand the sacrifices. I'm doing the things I should be doing now, and I'm not doing the things I shouldn't be doing. My biggest opportunity now is being in the UFC and I'm fully aware of that. My sacrifice now, I need to make as much time for training, so I can perform well when they call my name. Life is about sacrifices. We have the option to walk down the straight path or to turn right or left onto an incorrect path. To stay on that path, you have to sacrifice all the other influences.”

Up next is an October 5th hometown showdown with Brazilian jiu-jitsu ace Carlo Prater at UFC on FX. The Brazilian veteran is looking to rebound from his own unfortunate loss at the May event against Canadian grappler TJ Grant. A BJJ black belt with 16 of his wins via submission, Prater has a wealth of MMA experience, with notable wins over several UFC stars like Melvin Guillard, Spencer Fisher, and Carlos Condit in smaller organizations. Prater is an obvious threat on the ground, but LeVesseur is ready to take the fight to him on the mat in front of a Minnesota crowd.

As all UFC bouts are unique like pristine snowflakes, LeVesseur has added confidence that he can take advantage of Prater on the ground as Grant did. “We watched that fight, we've watched that fight probably over 100 times, and we see a lot of openings and things that he was able to do well, but we see things that he wasn't about to do well because of TJ Grant's positioning and his control,” says LeVesseur, who knows he cannot simply mimic what Grant did because it’s likely Prater has learned from his own mistakes. “I'm positive he's watched his own fight as well and has made sure to correct those things, especially going against another wrestler, but anything can happen and it's my job to make him revert to those bad habits and it's his job to not allow me to. He's very talented on the ground and I'm a good wrestler. A lot of times, those two disciplines cross each other and this might be a standup fight and we're totally prepared there too.”

Keeping LeVesseur sharp are the skilled martial artists of The Cellar Fight & Fitness gym in St. Anthony, Minnesota. On the feet, Chris Cichon is a multiple IKF kickboxing champion and has represented the USA multiple times in international competitions. On the ground, Marcelo Nunes is a BJJ black belt under Robert Drysdale. The eventual goal is for LeVesseur to feel like a videogame character again in the Octagon as he once did on the wrestling mat. It’s a process that requires him to make sacrifices both in and out of the cage to remain on that correct path to success.

“I'm not there and I've got a lot of growing to do in this sport,” reveals LeVesseur. “But I feel very confident where I'm at right now. I have a good idea of what I do best. With my offense, there are just some things I like to do naturally. With mixed martial arts, the biggest thing you need to do is to be able to adapt. We've been working on a lot of adapting because nothing is going to go as perfectly as it is planned, and if it does, then amen and thank God for that. You have to adapt; I think that's the biggest thing in this sport. Once you adapt, how fast can you find your path back? We've been working on the worst possible situations ever and how we can get back on course and fighting the fight I want to fight. I think that's going to be the biggest key here is to knock [Carlo Prater] off his course and to keep him off his course.”

This Friday in the Twin Cities, “The Prospect” will square off against Prater in a second chance to make a good first impression in his hometown. “For his sake, hopefully he doesn't overlook me,” states LeVesseur, who knows his debut was a box office disaster and is aiming to make the sequel a blockbuster hit. “I'm hoping he's not resting on his laurels thinking this is going to be an easy tap out because he will be in for a rude awakening. I'm pumped about it. It's going to be like New Year’s Eve that Friday in the city and I get to be one of the fighters that is making it like that and I'm thankful and I'm ready to give it my all.”

An exciting win at UFC on FX will be the ideal ending to this part of LeVesseur’s story. Fade to black, roll credits, and fight fans will look forward to the next one.