Marcus Brimage: Back on the Right Track 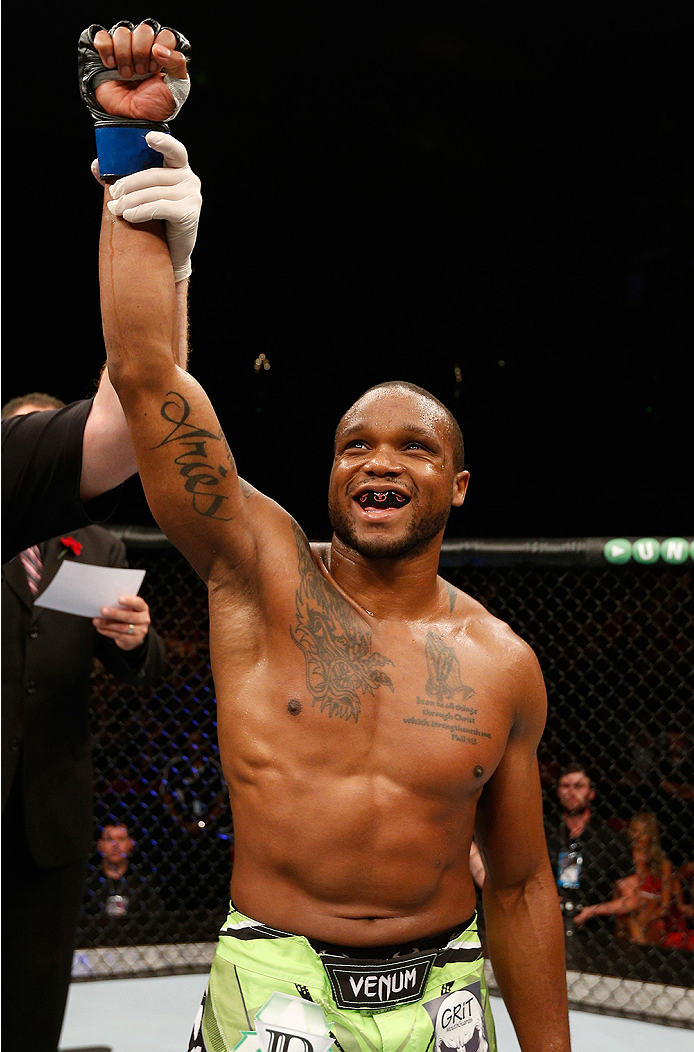 It’s as much a question of “where were you” when Marcus Brimage scored his first head kick knockout as it is “when were you.”

For Brimage and those in the Allphones Arena in Sydney, it was Saturday morning on November 8th. For Brimage’s friends, family and fans in the United States, it was Friday night on November 7th.

Either way, “The Bama Beast” delivered a super slick, highlight reel KO to Jumabieke Tuerxun - who had yet to be stopped with strikes in his pro career - just shy of three minutes into the first round.

“I noticed in his other fights that he kept getting hit on the left side of his face,” Brimage said. “Me being left-handed, I was just teeing off on his head. After I hit him with two good left hands, I thought he was jumpy with me throwing my left hand. So, when he threw his right cross, I parried it down and I threw a head kick. That is my first knockout. I have had TKOs, but that was my first clean knockout. Truth be told, I thought he blocked it.”

The cracking kick, which echoed through the Australian arena, was both a much-needed win for the 29-year-old who snapped a two-fight losing skid, and it was a warning to future bantamweight opponents that his stopping power is no joke.

At nearly any other event, that should have netted Brimage a Fight Night bonus, but UFC Fight Night: Rockhold vs. Bisping saw stoppages in all 11 of his bouts. Tough luck on the bonus for Brimage, but winning and doing it so impressively in only the second fight in his new weight class is a reward in itself.

“I was thinking going into that fight, just get the win,” Brimage said. “A lot of things happened leading up to that fight. I had issues close to home and an old guy hit my car and totaled it right before the fight. I was just so happy to get the win, truth be told. After the fight, I was totally thinking bonus, but looks like I was out of luck that day. When I was at 145 [pounds], I’d hit them and I would stun them, but then they would come back. At 135 [pounds], I hit them and they get that ‘oh crap’ look in their face and they back up. That’s what I like.”

While a proud member of American Top Team and a Florida resident, the mix of family issues, a lack of a ride and a dose of good ol’ Southern hospitality has Brimage training with the team he started out with at Spartan Fitness in Birmingham, Alabama. The 7-3 pro got back to basics getting ‘Bama tough working and bunking with his first MMA coach Christopher Connelly. It was Connelly who helped get Brimage to the big show as well as the one who told him he should expand his horizons and train with the illustrious ATT.

“Chris has always been in my corner,” Brimage said. “He created my fighting style. From there, I have added on things that I like that ATT has shown me, but, at the core, my fighting style is what he created. My parents let me borrow their car and I stayed with my coach like old times. From Sunday until Saturday, I was with my coach. He was cooking my meals and everything was about the fight. I didn’t think about nothing else. He took my Playstation! The only thing I had to focus on was the fight. That worked better for me. This is the coach who showed me everything and I’ve been with him for 10 years and he was just letting me know it’s time to get serious. You’re probably three fights from a championship and only one fight from getting cut. That’s just your life. He’s just a great fight strategist and you saw the results of this work.”

Up next, “The Bama Beast” is heading to Las Vegas for UFC 182 to take on undefeated debutant Cody Garbrandt. The Ohio native will be the latest Team Alpha Male product to enter the Octagon with a solid amount of hype behind him. “No Love” Garbrandt has a stellar 5-0 pro record with all wins via punching stoppage including four of them in the first round. The 23-year-old has a background as a high school wrestling standout and an amateur boxing record of 32-1.

“As soon as my fight was over, I told the UFC to sign me up for another one,” Brimage said. “I stayed in the gym. My manager Charles McCarthy called and told me about Cody. I said, ‘I don’t give a damn, sign me up!’ As I looked at him, he has a very colorful collage of tattoos - that’s what I first noticed. He’s a wrestler who likes to bang. He’s got a pretty good right hand and he’s with Team Alpha Male. That’s that.”

In preparation for Garbrandt, Brimage has spent a lot of time sharpening his ground game. For BJJ, coach Connelly brought in a black belt from Marco Galvao’s famed Atos team. For wrestling, Brimage has been battling former NCAA Division I wrestlers Seth Garvin and Ryan Romero at their gym The Warehouse Performance Institute.

The extra effort is to keep Brimage on his feet on January 3rd, so The Bama Beast can let those fists and feet fly aiming for their second highlight reel KO.

“Fight fans can expect to see a better and improved version of Marcus Brimage,” Brimage said. “I’m a lot calmer now and a lot more technical. I’m trying to get OG status. I’m not spry like the young guys. I’m very appreciative to be in the UFC. I’m calm and I’m ready to let them know something. I mean I’m still going to come in there handing out Southern fried butt whoopings like I’m supposed to do.”