Marcus Brimage and the Quest for Respect

"Nobody really knows who I am until after I beat the guy who they like." - Marcus Brimage 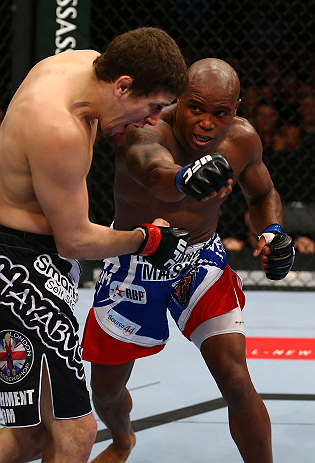 Comic legend Rodney Dangerfield died three years before Marcus Brimage turned pro as a mixed martial artist in 2007, yet the UFC featherweight certainly knows something about being the guy who gets no respect.

“I’m still at the bottom of the barrel,” said Brimage. “I’m one of the underrated fighters and nobody respects me at all. So of course I expect to get a fight where I’m the underdog again against somebody who’s supposed to be up and coming and the best thing in MMA since sliced bread. I’m not shocked at all.”

What Brimage is referring to is his Saturday UFC on FUEL TV 9 bout against Irish newcomer Conor McGregor. One of Europe’s top up and comers, McGregor will make his Octagon debut against a fighter in Brimage who has won three straight in the UFC. And despite following up his victory over Stephen Bass with wins over favored foes Maximo Blanco and Jimy Hettes, the soon to be 28-year-old “Bama Beast” finds himself once again facing the hot prospect.

That’s unfortunate, because the former Ultimate Fighter 14 cast member is one of the featherweight division’s top talents, a versatile competitor who has proven himself with his three for three run in the UFC thus far. And while Dublin’s McGregor has skill, translating that skill to success in the Octagon the first time out is a whole other story.

On the plus side for the Irishman, a win over Brimage would make a statement to the world that he has arrived. For Brimage, the upside isn’t as high with a win.

“They’re gonna say ‘oh well, he was a new guy,’” said Brimage. “My expectation for this is that people are gonna find another excuse to disavow my wins. And that sucks that I’m fighting guys who I can’t make my career off of, but they can make their career off me. Let’s just say Conor McGregor beats me; it’s gonna be ‘oh my God, he just beat Marcus Brimage, this guy’s pretty good.’ I whip Conor McGregor’s ass, people are gonna be like ‘who is Conor McGregor?’”

That doesn’t mean Brimage is bitter or unfocused heading into his first fight in Sweden. Oh, it’s quite the contrary given some of McGregor’s pre-fight talk, which has lit a fire under the Florida product.

“He’s been talking mad s**t leading up to the fight,” said Brimage. “He’s calling me intermediate, saying he’s gonna get $50,000 off me and buy himself a car and some new clothes. But after I give him his reality check and he knows his place, it’ll be all good.”

As for Brimage’s thoughts on the fighting skill of “The Notorious” Mr. McGregor, he is equally unimpressed.

“I went and youtubed him after I heard I was gonna fight him,” said Brimage. “He seems very slick with his standup, but it looks like he fights a whole bunch of bums that he knows he’s gonna beat. All his opponents are scared before they even get in the cage with him, and it’s weird because in both of his (Cage Warriors) championship fights, he got hit like three times combined. I just don’t understand that, and he was the challenger both times, so he took the belt from somebody else. But it is what it is; he’s got two championship belts but it don’t mean anything unless you’ve got a UFC belt.”

And that’s the road Brimage is already on, with a good head start on his peers at 145 pounds. It’s not easy to win any fights in the UFC, let alone three in a row to start your career. If that doesn’t earn you respect, than what can Brimage do except what he has been doing? The way he sees it, that’s all that matters.

“As long as I fight for the UFC and I get my two checks and keep on winning, that’s all that matters to me,” he said. “People are gonna say what they gotta say. So it really doesn’t bother me at all.”