With A Rematch Looming Between Marco Beltran and David Mendoza At LUX, Beltran Is Looking To Shut Down The Chance For A Trilogy With Mendoza
By Walker Van Wey, UFC FIGHT PASS • Jun. 23, 2021

Beltran received the news that he was cut from the UFC in late 2017. After two years away from the sport, he returned - not under the bright lights of the UFC, but back home at LUX.

“The Psycho” waved off ring rust theories and took home a fourth-round victory. Before you knew it, Beltran was taking on a very familiar foe, David Mendoza, for the 135-pound strap.

“Mendoza was one of my students for a couple months in McAllen, Texas,” Beltran explained. “We were training at Invictus MMA Gym. I was teaching some classes over there. I took him to fight in some events in McAllen. I know this guy pretty good.”

After giving credit where it’s due, Beltran laid out every weakness he saw in Mendoza. When Mendoza chalked it up to Beltran playing mind games, the record was set straight. 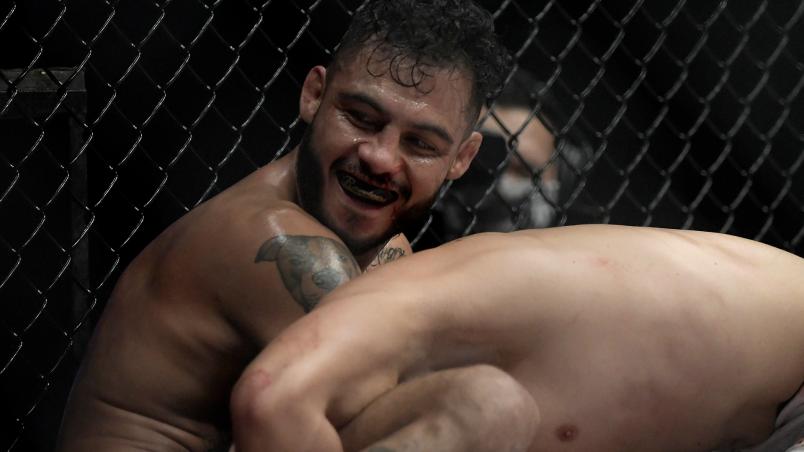 When the time to go to war came, both men clashed like Mack trucks at full speed. Just when the pace couldn’t get any faster, it turned up even further. Finally, in the fourth round, Beltran closed out a blood and guts battle in style.

“He threw all his power and weapons and it doesn’t work with me,” Beltran said. “After four rounds I submitted him with a Von Flue Choke.”

Mendoza chalked the loss up to poor cardio that saw him bogging down at the end, but Beltran rejects that theory altogether and warns Mendoza that if the only adjustment he’s making is enhanced cardio, he’s going to have just as rough of a night in this go-round.

“It’s not about cardio,” Beltran explained. “Everyone comes to fight with high cardio; it’s not about that. When someone punches you in the stomach and abs and wrestles you for four rounds and you throw like five takedowns, you spend a lot of energy. It’s about experience and strategy. He’s super athletic and he’s got good cardio; that’s not the problem. The problem is the guy in front of you.”

Both men avidly disagree on most things except the end goal and the immediate future. A win for either man could potentially land the bantamweight champ in the UFC, so if you think the battle will be less intense than the first time, you’re sorely mistaken, which brings us to the immediate future. Beltran, Mendoza, LUX Fight League and everybody who saw the first fight all agree that we have a Robbie Lawler-Rory MacDonald-level war on the horizon.

Good lord. Somehow going to see a fourth round. How? How? How?#LUX009 pic.twitter.com/t4EtVwmCXV

“I trained with him a lot of times and he’s easy to break,” Beltran said. “It’s easy to break him so I will try to start the fight super hard and start throwing in takedowns and he will quit. In some part of the round, I don’t which one, he will quit, I’m 100% sure.”