Marcio Alexandre: The Next Lyoto Arrives

"On May 31, the UFC fans can watch a Marcio “Lyoto” who is better
physically but has the same desire to win that I showed in TUF." - Marcio Alexandre 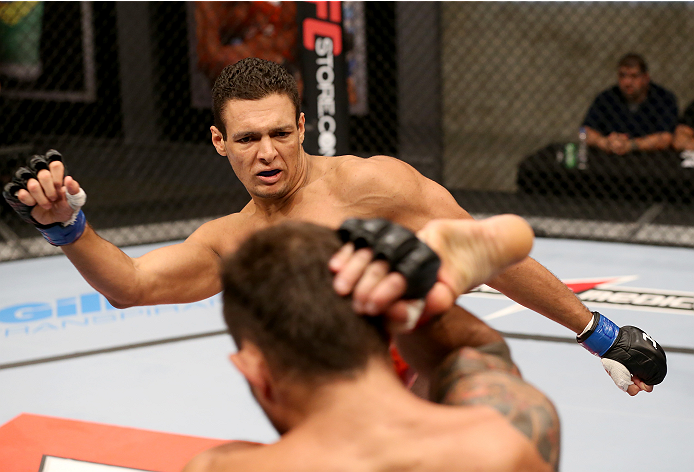 When you’ve studied martial arts for 20 of your 25 years like Marcio Alexandre has, fighting almost becomes second nature, not something to be feared or dreaded. So entering the biggest bout of his career against Warlley Alves this Saturday in Sao Paulo, the Ultimate Fighter Brazil 3 finalist is as calm and cool as he can be.

“I'm very happy to make my debut in the UFC,” he said through translator and UFC standout Thiago Tavares. “I want to show my potential and get the victory. I'm controlling my nerves well in this last week and I believe that I will put on a good fight.

“I feel much more confidence and maturity in each fight that I do,” Alexandre continues. “But I believe the biggest difference for me was to enter the martial arts when I was five years old. My body and my mind are ready to fight and compete anytime, anywhere.”

If you’re wondering where Alexandre received his nickname “Lyoto,” it’s not just because of his black belt in Shotokan Karate and a fighting style similar to that of former UFC light heavyweight champion Lyoto Machida, but in his similarly calm demeanor. Hey, at the end of the night you have to fight, so why stress yourself out beforehand?

This approach has done wonders for the Florianopolis southpaw, who won 12 straight on the local Brazilian scene before winning three bouts on TUF Brazil and earning himself a berth in the middleweight final. And while he had to dig deep to take split decisions over Paulo Costa and Ricardo Abreu, such victories taught Alexandre plenty about himself as a fighter, a fringe benefit of life in the TUF house.

“It was an incredible experience for me,” he said. “To pass through the third season of TUF Brazil was a great opportunity to get new knowledge in training with Chael Sonnen, a very experienced athlete who showed a lot of technique to his team. In the house, the biggest experience was to live together with 15 other guys completely different from each other. That was the most difficult part.”

Well, that and the fights against Costa and Abreu, the former seeing him almost get submitted before roaring back to win, and the latter forcing him to get through three rounds against the favorite to win the series with an injured foot. But he made it, showing not just skill, but heart, and now all that’s left is a fight with his teammate on the show, Alves.

“Warlley Alves showed himself to be a very complete athlete who comes to decide the fight in the very beginning,” said Alexandre. “He’s very aggressive, and this is his biggest quality.”

And as a pinpoint counterstriker, Alexandre knows that an aggressive opponent is just what the doctor ordered, especially for someone who owns 11 first round finishes, seven in under two minutes. So yeah, if you think this one might end early, that’s a strong possibility, because both Alexandre and Alves know how to get after it.

Another similarity the two share is that middleweight is only a pit stop on their UFC journey, with both expecting to move back to 170 pounds regardless of the outcome this weekend.

He’s got plenty of talent and support to do so, with Tavares being a key in his development as a complete mixed martial artist.

“Everything that I know about MMA I learned with Thiago Tavares,” said Alexandre. “My first class of MMA that I ever did was with Thiago Tavares and I still practice with him. Thiago is my master and an excellent athlete and I feel he always enjoys teaching me everything. He’s an essential person to me because he knows me a lot and knows how to teach me with quality and a high level of knowledge.”

If it sounds like Alexandre is firing on all cylinders heading into this pivotal fight, he’ll go one further and let you know that if you were impressed with him before, there’s even more to come this Saturday and beyond.

“On May 31, the UFC fans can watch a Marcio “Lyoto” who is better physically but has the same desire to win that I showed in TUF,” he said. “I’m ready to fight in any situation and show much more skills that can knock out my opponent and finish the fight. I’ll do my best in the Octagon, and I will leave it all in there to win this fight.”