Tybura Has Challenged Himself Throughout His Career To Help Build His Mind And He Believes That Will Give Him An Advantage Over UFC 278 Opponent Alexandr Romanov
By Gavin Porter, on Twitter @itsgavinporter • Aug. 18, 2022

Salt Lake City is the home of good memories for Marcin Tybura.

Back in August of 2016, Tybura earned his first career UFC victory by knocking out Viktor Pešta with a head kick. Tybura hasn’t forgotten what that night inside the Vivint Arena felt like and he’s hoping to make it two-for-two in the Beehive State when he faces Alexandr Romanov at UFC 278: Usman vs Edwards 2.

It’s an important fight for Tybura, who is coming off a decision loss at UFC 276 to Alexander Volkov. Prior to that bout, Tybura was on a five-fight win streak which was the best run of his UFC career to date.

Although he didn’t get the victory over Volkov, it was a critical moment of development for Tybura that has set him up to make the leap into the heavyweight elite.

“Those are the kind of fights that help you build your mind. You know that you’re at the same level as those guys and you have to pull a little more effort out of yourself and beat them,” Tybura told UFC.com. “That is a thing that you have to go through and build your mind and I think that’s what creates champions. You take small steps and then at the end you take a big step. It’s important for me to have the chance to compete with those guys and give a good fight and that shows that I’m at the right place.”

MORE UFC 278: Reasons To Watch | How To Watch In Your Country | Public Events Schedule

Thanks to some cancelled fights and unfortunate circumstances it’s been difficult for Tybura to get back into the Octagon since UFC 267. The time away from competition has only elevated Tybura’s game and desire to get back in the win column.

“Being away from the Octagon for so long has definitely made me hungrier, but, for me, it’s like no regrets,” Tybura said. “You have to wait for your time, work hard, train hard and that’s when good things will happen.

“Right now, I know I’m 100% prepared and there will be no mistakes. I will get my hand raised in this fight.”

The matchup with Romanov is an interesting one, as both fighters are talented wrestlers and jiu jitsu players. At 16-0, Romanov has been steadily climbing the rankings with impressive finishes over Roque Martinez, Marcos Rogerio de Lima, Jared Vanderaa, and Chase Sherman. He currently sits at No. 13 in the world, just two spots below Tybura.

Although Tybura is the higher-ranked fighter in the bout, the rankings have never driven Tybura’s decision making. What’s important to him is the opportunity to remove Romanov from ranks of the unbeaten and keep taking steps toward becoming the best fighter possible.

“The rankings can be crazy, and they really don’t say much. If you start to focus on rankings, it means you don’t belong here. There might be some fighters that say ‘no’ to lower-ranked opponents, but that’s not me. I’m here to fight,” Tybura said. “16-0 in MMA is something big so, for sure, he’s proved that he belongs here. Whenever I’m given a fight, I never say no. Whenever they offer, I agree.” 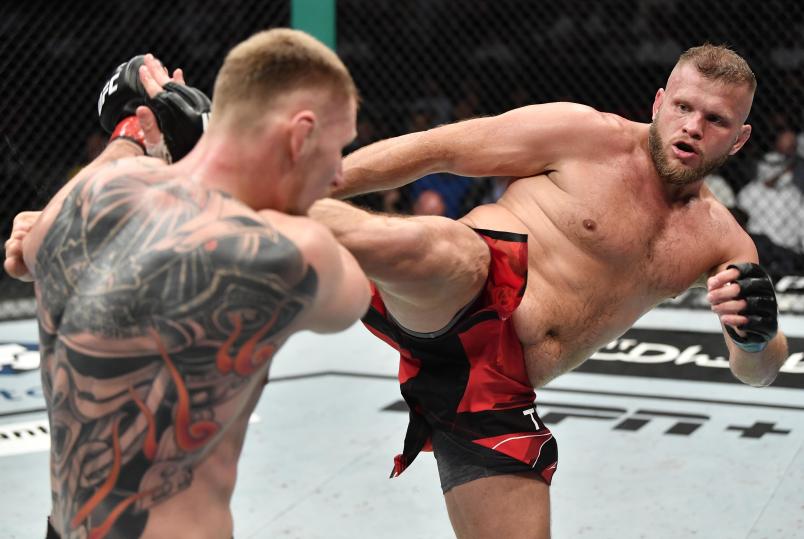 Another reason Tybura was so keen on accepting the bout with Romanov is simply because of his style of fighting.

“I’m excited because he’s a tough opponent. ‘King Kong’ is his nickname and he’s well-rounded and he goes crazy sometimes,” Tybura said. “He will bring a fun fight for the fans. I’m not taking a step back in this fight.”

FREE FIGHTS: Usman vs Masivdal 2 | Usman vs Edwards 1 | Costa vs Romero | Rockhold vs Weidman | Edwards vs Diaz | Usman vs Covington 2

Fight fans attending UFC 278 should be in for a treat, especially if the bout goes as Tybura expects it to. And maybe, just maybe, Tybura can deliver another spectacular finish in the arena where he got his first UFC win.

“Wouldn’t that be something,” Tybura laughed. “I guess the fans will see on Saturday night.”