Marcedes Lewis on training in MMA

"It’s one thing to be in a dojo and
training, but it’s another thing to get hit in the face and continue to
think and continue to fight back." - Marcedes Lewis of the Jacksonville Jaguars 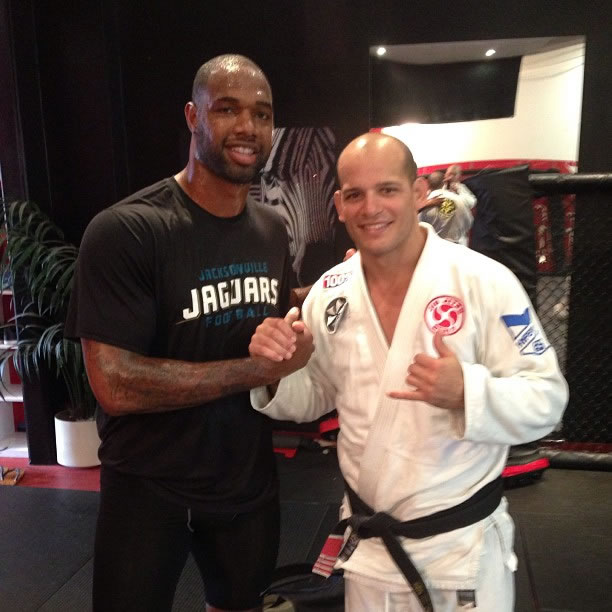 As one of the top tight ends in the NFL, the Jacksonville Jaguars’ Marcedes Lewis isn’t one to get star struck too often, if at all. But then UFC Hall of Famer Chuck Liddell walked into one of his MMA training sessions with FOX’ NFL insider (and UFC analyst) Jay Glazer and all bets were off.

“It’s hard to explain,” laughed Lewis when asked about his first meeting with “The Iceman.”  “I can’t even imagine how the actual fighters that have looked up to Chuck Liddell because they’re in that same realm reacted. And just me, playing professional football and following the sport for a long time, when he walked in the room, it’s not too many times I can say I’ve been star struck, but when he walked in, I was like ‘wow, there he is.’”

That was probably until Liddell started putting Lewis and his NFL comrades through an intense workout, right? Nope, says Lewis. Even after a trip through training hell, all he can say about one of the UFC greats is “He’s awesome.”

That’s dedication. But while mixed martial arts training has taken the NFL by storm thanks to Glazer’s MMAthletics program, it’s even more than just a workout for the 2010 Pro Bowler, who says he’s “always been a big fan of the sport for as long as I can remember, probably 16-17 years.”

A staple at Las Vegas UFC events during the off-season (he most recently hit July’s UFC 162 card), Lewis may have always been intrigued by the sport, but when he was approached by Glazer about taking part in the MMA program, he was a little skeptical.

“I want to say I thought of it before, but I never felt that I would actually even consider training,” said the UCLA alum. “I think everybody wants to do it, and I wanted to learn the art and take my mind there. So when Jay approached me, it was kind of like ‘yeah, right.’ But the more he talked about it, the more serious he sounded, and then I became serious about training.”

He hasn’t looked back since.

“I love what it does for your body. It really challenges me on the cardio side, and really challenges my mind to block a lot of different things out,” he said. “The discipline it takes to be able to go in there and train and really just put your mind in a special place, I think it’s awesome.”

Lewis’ peers would agree, with more and more pro athletes discovering the benefits of training in mixed martial arts, not just from the physical side, but the mental one as well.

“To be honest, I just think it challenges you in areas that normal football training won’t,” he said. “Obviously in football you’re going to train specifically to your position. When you’re training in mixed martial arts, it’s a total body, draining, want to make you quit type of workout. And if you’re a competitor, that drives you to keep coming every morning to do it. And the fact that it pushes your mind to different limits, it pushes you in a direction that you never thought you could go. That’s more than enough to keep a true competitor continuing in the fight.”

Currently in his eighth pro season, Lewis has already lasted longer in the league than most (in 2011, Commissioner Roger Goodell estimated that the average NFL career is close to six years), and despite sitting out the early part of the season due to a calf injury, he’s closing strong, having his best game of the season (four catches, 54 yards, 1 TD) yesterday against the Buffalo Bills. And while you can’t say beyond a shadow of a doubt that MMA has been the catalyst to help him stay as long as he has in the league, it hasn’t hurt.

“I feel like a lot of guys that do it are interested in the sport, just in general, and that once they get in it, they’re like ‘oh man, this is changing my body in different ways and can really help me out as far as my sport goes to help me stick around,’” he said. “When you’re working out that way and doing all that stuff in there, it’s going to keep you younger a lot longer.”

About the only negative is that due to the Jaguars final game of the season at Indianapolis on December 29, he’ll miss UFC 168 in Las Vegas the night before. But rest assured, the 29-year-old will be following the action on his computer. As for his call on the main event, is he picking Anderson Silva to regain his crown from Chris Weidman?

“Of course,” he said. “Weidman is gonna have to prove that again.”

But whoever wins on December 28, Marcedes Lewis readily gives a tip of his hat to all the mixed martial artists in the UFC. Not just as a fan, but as someone who has seen firsthand what they go through to get to the Octagon.

“I have the utmost respect for the guys that are able to do it and do it at a high level,” he said. “It’s one thing to be in a dojo and training, but it’s another thing to get hit in the face and continue to think and continue to fight back. If you make a mistake in a fight, then you’re getting knocked out or submitted. You make a mistake on the field, then it’s just gonna be a penalty. So I have so much respect for those guys, and not just the fighting, but the training, the whole ten weeks that they go through training camp to get ready for a fight. You go through all that stuff for three rounds – you’re dieting, you’re putting your body through all of this stuff, you’re bringing guys in to help you get ready for it, beating yourself up, all for 15 minutes.”